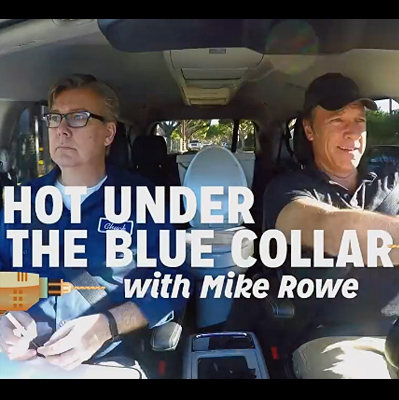 Mike – You know, I’m completely with you when it comes to removing the stigma attached to blue collar jobs But it seems to me that you’re pushing a negative stigma of college education. Scroll through the comments here and look at how many folks are dismissive and downright hostile to the very idea of a college education. It’s a kind of a reverse elitism. It’s fashionable here to poke fun at college kids as whining parasitic slackers but as with all stereotypes, it’s not entirely accurate.

If you want the US to remain a world leader, it will require us to be more than simply the world’s ditch diggers (and I say that having worked as a ditch digger). It requires scientists and mathematicians and doctors and engineers and teachers. Where are those people supposed to come from if we don’t educate them? Will they all have to come from the upper economic class since they’re the only ones who can afford college? That’s REAL elitism and it doesn’t strike me as much of a solution.

I appreciate your comments, but I’m not sure I understand the concept of “reverse elitism,” vs. “REAL elitism,” vs. “regular old elitism.” Seems to me you’re either elitist or you’re not – regardless of your tax bracket. Just like your either racist or you’re not, regardless of your color. Personally, I’ve tried very hard over the years to be as egalitarian as possible while promoting the existence of several million skilled jobs that don’t require a four-year degree. And though I encourage many alternatives to college, I’ve never suggested that higher education isn’t critical to America’s prosperity, or that we should become a nation of “ditch diggers.”

This is the fundamental challenge of an impatient society desperate to solve complicated problems in 140 characters or less. We reduce important issues into memes and soundbites and then take them out of context. To be clear – no one at mikeroweWORKS would ever minimize the importance of “scientists and mathematicians and doctors and engineers and teachers,” or the universities that train them. But the current skills gap is not defined by shortages in those careers. People compete everyday for the right to attend America’s universities, and then borrow vast sums of money to pay for the privilege. It’s the cost you’ve heard me bitch about – not the importance of the education itself.

Over the last 40 years, the cost of a four-year degree has risen faster than real-estate, food, energy, and healthcare. I believe this spike has been driven by two things – the mistaken belief that a college education is the best path for the most people, and the infinite pile of money we’ve made available in the form of student loans. We’ve guaranteed colleges an endless supply of customers, along with an endless supply of credit. Is it any wonder they keep raising the rates?

To answer your question, yes – in theory, college graduates would eventually come from the upper class exclusively, if they are the only ones who can afford it. But if that were the case, colleges and universities would go out of business, because there wouldn’t be enough students in the pipeline. The point I think you miss – respectfully – is that college stopped being “affordable” a long time ago – and people are still enrolling at record rates. Why? Because we have decided that the cost of admission and the accumulation of debt should NOT prevent anyone from attending the college of their choice. Consequently, college is more expensive than ever, our kids hold $1.3 trillion in loans, and we have 5 million good jobs out there that no one is trained do. In a perverse way, our desire to send everyone down the same path, is the very thing that’s made college so damn expensive.

Finally, I don’t know that it’s “fashionable” to imply that all graduates are “parasitic whiners,” but I certainly don’t feel that way, (although I do enjoy the phraseology.) What IS fashionable however, is to say that opportunity is dead in America. Not only is it fashionable to say so – it’s the very premise upon which many people are trying to get elected. With respect to opportunity, let me be as clear as I can:

I believe there’s a job out there for everybody who wants one. It might not be your “dream job,” or the job you were educated to do, or the job you were trained to do, or the job your parents hoped you would do, or a job that’s located in your current zip code. It might even be a “dirty job.” (See what I did there?) But there’s no doubt in my mind that opportunity is alive and well in these United States for anyone willing to learn a skill that’s in demand. That’s why we offer work ethic scholarships. mikeroweworks.org. That’s why we raise money by selling ridiculous shirts with my dog on the front. represent.com/mikerowe. And that’s why I partner with like-minded companies.

The video you responded to Eric, is just one small example of our ongoing efforts to remind people that opportunity is not dead in America. So is the one attached. Both encourage careers in the skilled trades, and both will fail to win an Academy Award. But neither is anti-education.