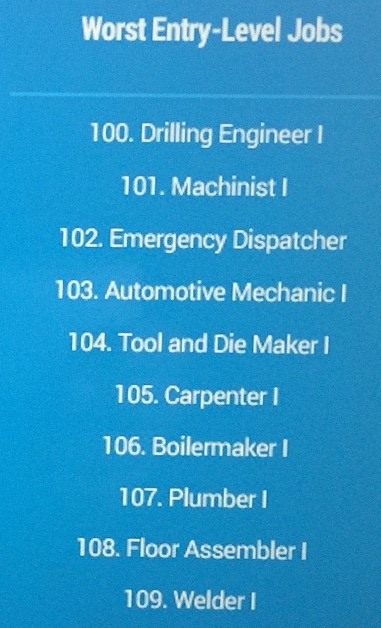 When people ask me why millions of good jobs remain unfilled while millions of able bodied Americans remain unemployed, I try to alternate my responses between a decline of work ethic, an onslaught of unrealistic expectations, and our irresistible desire to reward bad behavior. But I think the biggest reason so much legitimate opportunity goes unloved, is due to our bizarre obsession with separating “good jobs” from “bad jobs.”

There’s no better way to discourage the next generation from learning a skill that’s actually in demand, than by telling them that certain jobs are “bad,” and therefore “beneath” them. Consider the latest wisdom from the luminaries at WalletHub. For whatever reason, these arbiters of job satisfaction have taken it upon themselves to identify the “best and worst” vocations in America. To accomplish this, a cadre of “experts” were consulted, as WalletHub compared and contrasted over a hundred entry-level occupations across three “key dimensions” 1) Immediate Opportunity, 2) Growth Potential and 3) Job Hazards.

Next – because science is important – WalletHub identified “11 relevant metrics,” each of which was assigned a “corresponding weight.” Then, each metric was given a value between 0 and 100, wherein 100 represents the most favorable conditions for a specific entry-level position, and 0 the least. In this way, 109 different occupations were ranked from first to worst.

I’m tempted to spell out the absurdity of WalletHub’s methodology, and show you why the statistics they use are as flawed as they are irrelevant. Instead, I’m just going to post their Top 10 and Bottom 10 careers, and direct you to their website, where you can judge their methodologies and agenda for yourself.

I’m also tempted to lambast the journalists over at Channel 10 in San Diego, for reporting on this nonsense as if it’s actual news, instead of The Public Disservice Announcement it so clearly is. Consider their own words, from their own website: “Those who are new to the workforce have a few jobs to avoid, if they can help it…”

At a time when society could be celebrating opportunity wherever it occurs, in all it’s varied forms, we instead shine a light on “research” that demonizes work, disparages the skilled trades, 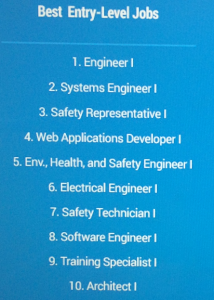 discounts the importance of dozens of good careers, and demeans thousands of skilled tradespeople. Madness. If I were just a little older, I’d be standing on the porch in my bathrobe, shaking my finger, and saying, “Shame on you, Channel 10. Shame on you, WalletHub.”

Sadly, no one takes angry men in bathrobes seriously, so I’m instead offering $400,000 of work ethic scholarships to people interested in pursuing the very careers in WalletHub’s Bottom 10.mikeroweWORKS.org.

Seven jobs historically supported by mikeroweWORKS have been singled out as undesirable. Welders – a truly noble profession that WalletHub ranks dead last – have used our scholarship funds to gain valuable training. Likewise plumbers, machinists, boiler-makers, mechanics, carpenters, and many other people who had the good sense to pursue a skill that’s actually in demand. I’m in touch with these people, and I can tell you that all of them are thriving. They’re proud of what they do, and proud of how they do it. Seeing their chosen profession at the bottom of somebody else’s list however, is probably a lousy way to start the weekend, so I’ll close with this:

Don’t be fooled by these lists. They’re cobbled together by imaginary experts looking to sell America a one-size-fits-all approach to job satisfaction. It’s a crock. And so are the journalists who report such nonsense as news. There’s simply no such thing as a bad job, and anyone who tells you otherwise is selling something.

Have a great weekend.

PS. Speaking of selling something, my dog is running for President, and raising funds for mikeroweWORKS by channeling the one and only Teddy Roosevelt on a tasteful tee-shirt perfectly suited for casual Fridays. Sale ends today. Check it out at represent.com/mikerowe