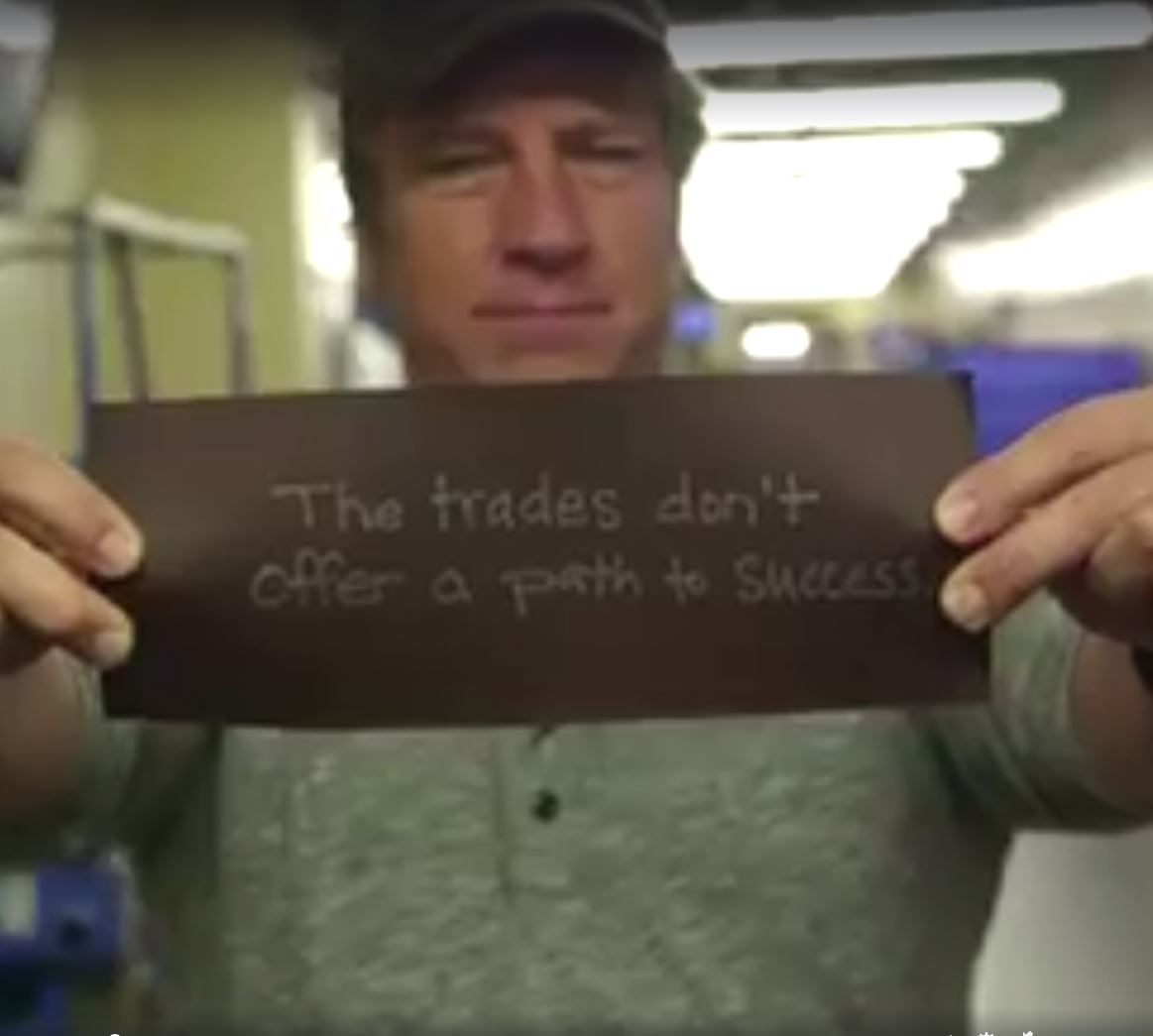 Over on mikeroweWORKS, my buddy Chuck wrote a post that included #skillsgap. Someone did not approve…

I’m tired of hearing about the skills gap. I have a Porsche gap. There aren’t enough Porsches available for me to buy at the price I prefer to pay. Nobody tweets #PorscheGap. Nobody cares what I want to pay. If I want a Porsche, I have to pay a price that outbids everyone else also looking for a Porsche. The moment I’m willing to pay that, I get a Porsche. I’m not. So you know what the truth is? I don’t actually want a Porsche all that badly.

“But we’re already paying $X!” Tough. Pay more. Employers are happy to pay less when the market allows it. Now there’s a shortage – partly because they treated skilled labor so badly, for so long, people stopped trying because it wasn’t worth it – and they don’t want wages to go the other way. They’ll kick, and scream, and whine about how employees don’t have the skills they need, but they won’t do the ONE thing that in a free market is guaranteed to produce higher supply.

Which means they don’t really want it all that badly.

No more whining. Put your money where your hashtag is or shut up about how hard you have it.

I’m no economist, but I’m pretty sure you’re not suffering from a “Porsche Gap.” The fact that you have decided not to purchase one, doesn’t mean there’s a shortage of them. It just means there are no Porsches available at the price you wish to pay. Big difference.

In your example, you are in complete control of the transaction. You get to decide if the cost of acquiring a Porsche is too high. And thanks to a competitive marketplace, you get to choose from a myriad of more affordable options. Thus, you don’t have an underlying transportation problem. The skills gap however, poses an entirely different challenge.

Let’s say you need a plumber at your house this afternoon. Your upstairs toilet exploded this morning in spectacular fashion, and the situation is now dire. So you call the nearest plumbing outfit where the going rate is $88 an hour. No problem, especially for a guy who could buy a Porsche, (if he wanted to.) Unfortunately, there are no plumbers available.

“But wait,” you say. “This is an emergency. My floor is covered with crap and my toilet doesn’t flush.”

“Sorry, sir. Our plumbers are all booked up for the next three days.”

You slam the phone down and call another outfit, and then another one after that, but it’s the same thing everywhere – all the plumbers are busy dealing with other crap-related calamities. You’ll just have to wait your turn.

That’s the reality of the skills gap. Sure, it’s bad for the employer, because it makes it hard to expand the business. But it’s even worse for those of us addicted to indoor plumbing and reliable electricity. I know it’s fun to tell those whiny entrepreneurs to “shut up and pay more,” but tell me, are you prepared to say the same thing to the senior citizen in Phoenix, suffocating in the August heat, who can’t find anyone to fix her air-conditioning? Or the young family in Bangor, freezing in the January cold, who can’t get anyone to come out and repair their broken furnace? Remember – these rapacious capitalists you’re addressing do not run charities – they run businesses. The more they pay their people, the more they charge their customers. You might not like it, but that’s how things work in the free market. The cost of labor is tied to the cost of goods and services.

Personally, I’m not comfortable telling employers what to pay their people, or manufacturers what to charge for their product. Like you, I prefer to let the market sort it out. But one thing is beyond dispute – the skills gap is real, and it affects everyone – even people who drive Porsches. But it also provides an opportunity for anyone willing to learn a skill that’s in demand. I personally know dozens of plumbers, electricians, welders, and HVAC specialists making in excess of $100K a year. Many in fact, have parlayed their trade into a multi-million-dollar business. That story is not uncommon, but rarely told. Seems to me, if more people saw the opportunities in the skilled trades, the skills gap would close a whole lot faster.

I hope this modest episode of “Hot Under the Blue Collar” will help make that point, and if you think it does, I encourage you to share it. As you’ll see, the tradesman we feature learned plumbing from his father, and hung out his own shingle when he was 28 years old. Today, he employs over a hundred people, and bills north of $23 million a year. I don’t know if he drives a Porsche, but I can tell you this – he’s hiring plumbers and HVAC specialist right now at competitive rates. And providing a genuine opportunity for anyone who wants it.