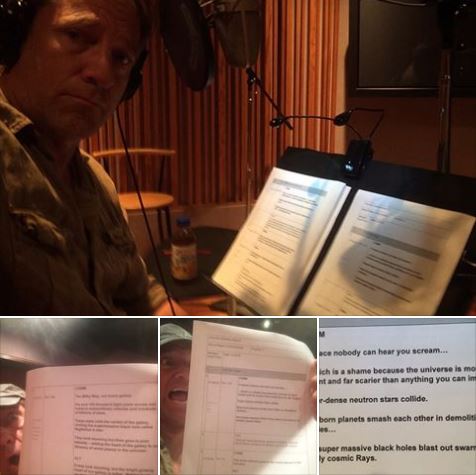 I don’t scare easily, especially on Halloween. But I swear, every time I narrate another episode of How the Universe Works, I become more and more certain that my pals at Science Channel are trying to give me a heart attack. Check out these lines from a pending episode I just read called “The Worst Places in the Universe.”

Over the years, I’ve learned many interesting things narrating this program, including the absolute certainty of my own demise at the hands of a cold and indifferent cosmos. The only uncertainty seems to revolve around the exact method of my annihilation. A super massive black hole? A collision of two Neutron stars? A supernova? A comet? An asteroid? Gamma rays? Today I learned about “strangelets,” a new kind of horror that can “zombify” matter, and deadly strings the width of a proton, ten miles long, that weigh more than Earth. It’s an endless parade of horribles, and today’s episode was another reminder that no one is getting out of this alive.

And yet – the show is oddly comforting as well. What we’ve learned about the Universe over the last twenty years is both staggering and humbling. And what I’ve learned narrating this program has made me feel much smarter than I really am. On the other hand, it’s also convinced me that I don’t know my ass from a hot rock.

Last week for instance, I learned that we’ve discovered another planet in our solar system, much bigger than Earth, orbiting around somewhere beyond Pluto. (Pluto, as I’m sure you’ve heard, lost its planetary status some time ago, when it was determined to be much smaller than many thousands of other asteroids flying around the Kuiper Belt. Awkward.) Anyway, this “new” planet has been in our own backyard for billions of years. It’s HUGE. And we’ve just discovered it.

This weekend, in a bar called Grumpy’s, I listened as two professors from Berkeley discussed with great passion the inevitable consequences of ignoring climate change. When I was invited to share my opinion, I shrugged and said, “Beats me, fellas. Last week the smartest people on the planet thought there were 100 billion galaxies in the universe. They were off by a couple trillion. I’m not really sure what’s in store for planet earth.”

I was surprised by their response. One frowned real hard, and stared into his beer. The other asked if I was some kind of “Climate Denier.”

“You know what I mean,” he said. “Are you skeptical of the fact than man is destroying the planet by heating it up to an unnatural degree?”

“I’m skeptical of most things,” I said. “But who cares what I think? I’m just a narrator. You guys are the actual scientists, right?”

“We are,” said the one staring at his beer.

“Well then, tell me this. Isn’t skepticism at the very heart of scientific inquiry?”

“Then how come people who question the claims around global warming are called “Deniers?”

“Because Global Warming is real, and man is causing it. And our planet is in terrible trouble.”

Then the other one chimed in with this. “Right now, this planet is one of the worst places to be in the universe.” 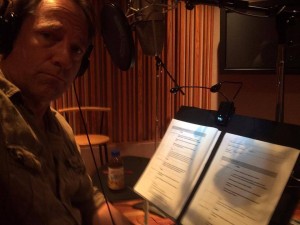 I nodded. “I’m sure you’re right,” I said. “But if it turns out you’re not, and you need someone to walk it back for you – give me a call. I’m in the booth all the time.”

I’m not sure they got it.
Anyway, Boo.

Mike
PS. I’ll let you know when the new season starts. It’s a good one.