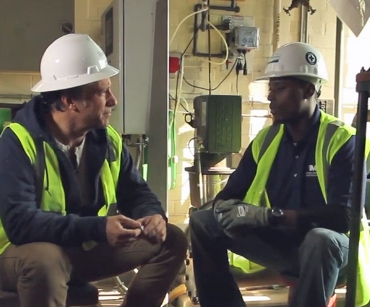 Hey Mike – Any thoughts on your racist President’s attack on your fair city? No? I thought not. Bryan Watson

To the dismay of many on this page, I’m going to answer your question. Not because I want to start a political fight, (or reward your phraseology,) but because Baltimore is in fact, my hometown, and I object to the way it’s being discussed. Full disclosure, I’m involved in the annual Baltimore Homecoming later this fall, whose purpose is to shine a light on the many good reasons to live and work there. So, with that bias in mind, I’ll answer your question as candidly as I can.

In short, I think the President, having touched the tusk of an elephant, has concluded that the whole animal is made of ivory. Obviously, he’s mistaken.

Once upon a time, I owned a home in the seventh district. In fact, I was born in Ellicott City, also represented by Elijah Cummings. I visit often because I still have friends in the Congressman’s district, and when I’m there, I see nothing resembling the conditions the president has described. That’s not to say those conditions don’t exist; they do. But there’s more the seventh district than urban blight, and I feel a certain obligation to help Baltimore push back against unfair portrayals and one-sided, inaccurate characterizations. The reputation of a town is not so different than the reputation of a man or woman. Both take a lifetime to build, and just a few moments to destroy. And the press is very good at destruction, even when the carnage is unintentional.

In the wake of the earthquake in Northridge, the constant coverage of a few devastated areas led many Americans to assume that all of LA was sliding into the sea. That was not the case. After the riots in Ferguson, the constant coverage led people to assume the entire town was on fire, when in fact, it was a relatively small area. Today, a Baltimorean watching the national news might conclude that San Francisco is completely covered in human feces. Well, it’s not. Yes, there are blocks that are littered with crap and needles and vermin, and that is an absolute, inexcusable tragedy. But the entirety of San Francisco is not covered in waste, any more than the entirety of Baltimore is overrun with rats.

Like New Orleans, Chicago, Philadelphia, St. Louis, New York, Seattle, and every other major city, certain parts of Baltimore are undeniably horrible. But are the horrible parts of Baltimore really “more horrible” than the horrible parts of other cities? Is that really the question we ought to be exploring? What can we hope to learn from proving that the most “dangerous and disgusting” parts of Baltimore, are more “dangerous and disgusting” than similar parts of other towns? The answer, in my opinion, is nothing. It’s a bit like comparing the maggots in your pasta, to the roaches in your salad. One is not “worse” than the other, and neither should be acceptable.

I think it’s important for the president to remember that hundreds of business owners, many of whom I know personally, are betting big on Baltimore. I’m talking about people who run restaurants, carwashes, advertising agencies, and dry cleaners. I also know some wealthy investors who have put millions into the Inner Harbor, Fells Point, Canton, Highlandtown, Federal Hill, and Port Covington. These people are not the enemy. They employ thousands of city residents, and struggle daily, not just with the challenges of running a business, but with exaggerated characterizations that discourage growth and stifle opportunity. The same kind of characterizations the president makes when he tweets about a specific district in such sweeping terms, along with the rest of the city.

Having said that, Bryan, I don’t see anything in our President’s comments that suggest he cares one way or the other about the color of Elijah Cummings, or the color of his constituents. His comments are neither accurate, nor presidential, but they don’t strike me as racist. From what I’ve seen of the man, he would have tweeted the exact same thing regardless of who was in Elijah Cumming’s chair. Obviously, I don’t know what’s in his heart, but if there’s an upside to any of this, maybe the media will to start asking the elected officials some genuinely hard questions? Maybe a worthwhile conversation will ensue?

When I launched a campaign a few years ago called “Safety Third,” I knew there would be pushback. I knew the title would rankle safety professional and HR folks, who assumed I was minimizing the importance of safety. But of course, I wasn’t. I was simply trying to start a conversation around a topic that’s important to me, and did so by taking a seemingly controversial position. That opened a giant can of worms, initially, but ultimately led to some really worthwhile initiatives within a number of large companies that I’m told had a positive impact on occupational safety.

Is this part of the president’s strategy? Beats me. He doesn’t run his tweets by me beforehand. I doubt he runs them by anybody. But I understand the idea of stepping on a few toes in order to start a conversation. And I also believe, wholeheartedly, that many things in Baltimore that need to change. That change, however, will never occur if tourists and entrepreneurs believe the city looks like a war zone. Nor will it happen if voters are unwilling to take a hard look at the policies and practices under which they are currently governed.

Anyway, in the interest of something approaching balance, here’s an example of a program in Baltimore the president could encourage other cities to emulate. Check out the attached video. It’s short, and features a few friends of mine from the rougher parts of town. Some will likely dismiss them as former convicts or homeless drug addicts, which they were, once upon a time. But that’s no longer the case. Why? Because these men refused to be defined by their past, or by a tweet from someone who can’t see the whole elephant.

I hope Baltimore can do the same.