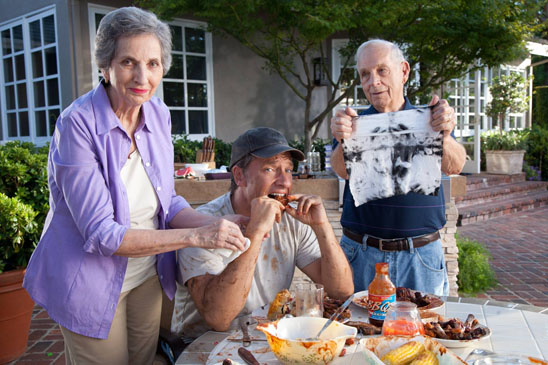 “I always liked you Mike, b/c I thought you were a real guy.
Then I saw commercials with fake parents in a fake kitchen & I realized you are just as fake as the other plastics on TV.”

Hi Laurence. I sent your ridiculous note to my folks, and looked forward to sharing a good laugh with them during this mornings coffee and Skype. But imagine my surprise when my “mother” confirmed your accusation! Apparently, “John and Peg” are in fact, “Frank and Louise,” a couple of pranksters who spent half a century pulling off one of the more elaborate practical jokes I’ve ever seen. Unbelievable!

Turns out my true birth mother was a nameless gypsy with a trick pelvis, and my real dad was a Merchant Marine on permanent shore leave. How I wound up in the care of Frank and Louise is still a bit of a mystery, but after speaking with my older cousin, (OK, step-cousin,) it seems I was a door prize at a bingo tournament.

Obviously, I’m still a little freaked out, but wanted to thank you personally for seeing what so many others have missed. Truth is, these two grifters have ridden my coattails long enough, and now, as I look back at all the fame and fortune they’ve accumulated impersonating my parents, I can’t believe I didn’t catch on faster. Their conspiratorial glances, their knowing smiles, their shameless insinuation into one commercial campaign after the other. I was so blind…

Anyway, thanks again for the heads-up. I completely understand how disappointed you feel, and I hope you’ll give me the chance to get back in your good graces.

Mike’s (if that’s who he really is) Facebook Page