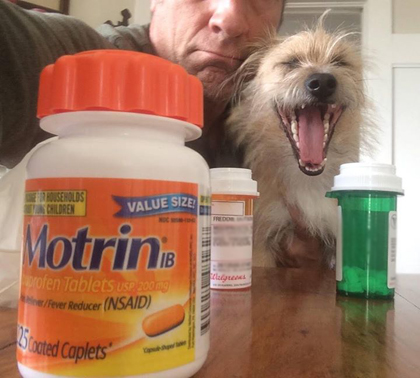 It was just a little orange pill, a “capsule-shaped tablet,” glazed with a delicious coating of slippery sugar. If The Biped didn’t want me to eat it, why did he leave it on the bedside table? Did he really think I’d take the time to read the warning label? Did he really suppose I possessed even a rudimentary understanding of what “Ibuprofen” actually does, or any sense of the havoc 200mg of “fever-reducing Nsaids” can do to the plumbing of a thirteen-pound canine?

Put yourself in my place. You’ve had a thorn stuck between your toes for the last few days that won’t come out. The pain is exquisite. You see the words “Pain Relief” printed on the side of the bottle with pictures of orange pills all over it – the same orange pill sitting there a few inches from your tongue. You go for it, and twenty seconds later the biped is pouring hydrogen peroxide down your throat and screaming at you to vomit. Naturally, you resist, which is a mistake, because fifteen minutes later a sadist in a white lab coat is pouring something a lot more disgusting than H2O2 down your throat which causes you to barf all over his ugly shoes in a fairly spectacular fashion. Serves him right. Then another Torquemada dressed in the same stupid outfit makes you eat a bunch of charcoal and pee in a bottle. After that, a lady smelling of patchouli and old cat takes your blood and makes the Biped fork over his credit card, (which you’ve never actually seen before.) Then your off to the drug store for some more pills – Sucralfate and Misprostol, (ka-ching!) – which you’re slightly hesitant to swallow, all things considered, even wrapped in Creamy Jiff. (Hell, who are you kidding? You’d eat one of your own turds if it was wrapped in Creamy Jiff.)

Anyway, that was yesterday. Today, the Biped feeds you more pills and more peanut butter. Then he scoops up your crap in a plastic tube, and whisks you back to the The Marquis de Sade for more poking and prodding and various humiliations. Finally, just as you’re about to leave and apropos of nothing, Patchouli Girl sweeps in and trims your nails WAY TOO SHORT! Meanwhile, the thorn is still in there! Ugh.

Honestly, it’s been a rough couple of days. “Pain Relievers?” I do not think those words mean what you think they mean….

PS. You’d think at these prices the thieves at the pharmacy could spell my name right on the damn prescription. Visigoths!