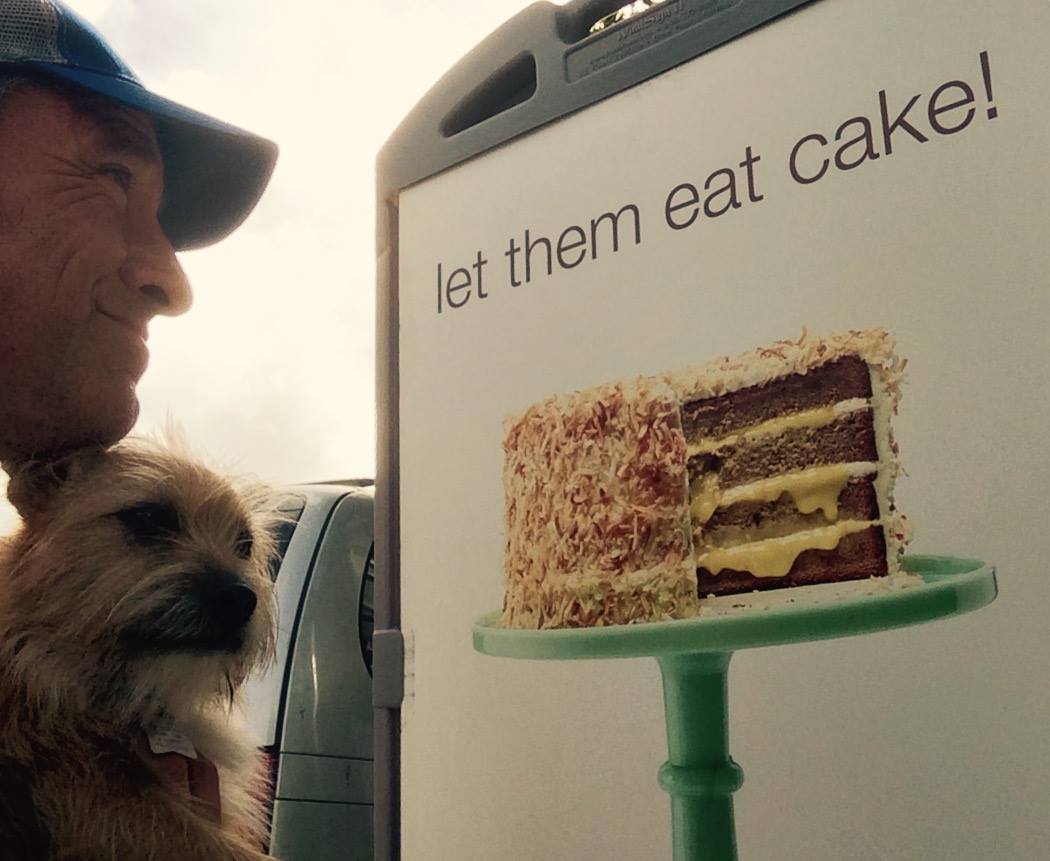 On our morning stroll, the biped stopped to consider this sign, which he described as “ironic.”

Is it? I found it merely sarcastic, or perhaps sardonic, with a touch of snark. But maybe I’m wrong?

The sign is an advertisement for Kara’s cupcake shop. Kara makes delicious gourmet treats that I’m not allowed to have on account of chocolate being deadly. (Is that ironic, or just tragic?)

Kara’s delicious cupcakes cost over $3 a piece, which may or may not be a problem, assuming you have a job, and some pockets to put your cash in. I have neither. (Ironic, or just irrelevant?)

Kara’s advertisement refers to Marie Antoinette’s famous rejoinder to starving peasants who had purportedly run out of bread. The ensuing famine lead to the French Revolution, and a trip to the guillotine for Marie. (Was that ironic, or “just desserts,” as it were?)

Obviously, Kara’s message alludes to today’s economic landscape. The phrase calls to mind everything from income disparity to The Occupy Movement, common talking points at all Bay Area dog parks. But within this context, what exactly is Kara trying to say? Who exactly does “them” refer to? Is she sympathizing with the 1%, or The Great Unwashed? This I think, is the key to understanding whether Kara is being intentionally ironic, or unintentionally obtuse. (Query – can one be unintentionally ironic?)

Consider: Kara’s shop is located in a very nice part of town, so her clients are probably not on the dole. Thus, she’s marketing a luxury product – an indulgence, really – directly to people who can easily afford it. But does quoting Marie Antoinette mean she’s being insensitive to the disenfranchised who are forced to eat less expensive, less delicious treats in crappier parts of town? Perhaps. But remember, Kara’s doing business in The Republic of San Francisco, so it seems unlikely she’d adopt a marketing strategy that was overtly sympathetic to the wealthy, or in anyway condescending to the poor. So I’m inclined to assume her advertisement is really a pseudo-political, quasi-social commentary on the wealth gap, wrapped in a delectable frosting of post-modern cognitive dissonance.

However – and this is important – there’s no proof that “Let them eat cake,” was actually uttered by Marie Antoinette. (Is that ironic, or merely libelous?)

The phrase was first referenced in a very imprecise way by Jean-Jacques Rosseau in his autobiography, Confessions, which was published when the Princess was just 9 years old. The misattribution however has since become so ubiquitous, it’s simpler for the well-read consumer to just go along with the inaccuracy, and accept the underlying snark for what it probably is. But…

If Kara knew the correct etymology of the expression in question, and was actually trying to sell her delicious treats in a way that traded not just on the stereotypical insensitivities of wealthy, but on the grossly misunderstood origins of the expression in question, well… that would put the whole message in a totally different context, and suggest something akin to the irony my biped claims to see.