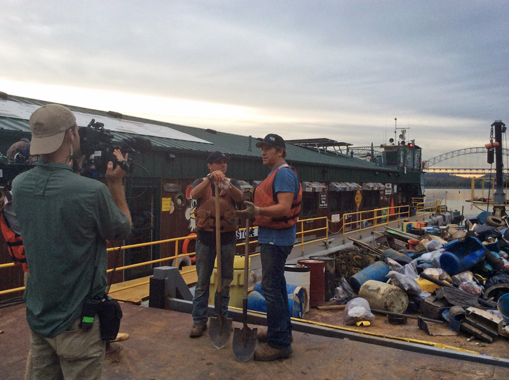 A couple of weeks ago, I was stuck in traffic on Lombard Street, desperate to get across the Golden Gate Bridge for a meeting I was doomed to miss. As I quietly cursed the faceless bureaucrat who approved road work during rush hour, the guy in front of me threw an empty Big Gulp out the passenger window. I watched the giant cup bounce around the street, roll into the curb, and come to rest on the grate of a storm drain. The guy was driving a Prius, and the irony was just too much to bear.

I hopped out of my car, retrieved the trash, and approached his vehicle. Squatting on the pavement, I addressed the gentleman from the passenger side. “Hi there!” I said, grinning my best game show host grin. “I think the wind blew this giant cup out of your environmentally friendly vehicle. Here you go.”
I dropped the Big Gulp on his seat and turned to leave, but the man stopped me.
“Hey…wait a minute,” he said. “You’re the dirty jobs guy! Holy crap! Are we on TV right now?” The man craned around, looking for a camera crew, ready for his close-up. 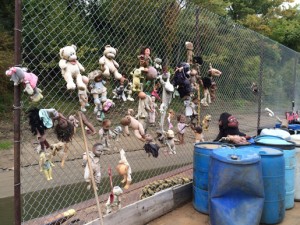 d myself as the host, armed with one of those rattan canes, empowered by the network to prowl a different city every week and punish litterbugs caught in the act with a swift and spontaneous caning. (“Drop you pants, pal, and lean over the Prius.” whack! “People start pollution…” whack! whack! “people can stop it.” whack! whack! whack!) Who wouldn’t watch that?

Alas, I had no cane, and no mandate to beat my fans in public. So I walked around to the driver’s side, smiled for a photo, and returned to my own vehicle, where I pondered the vagaries of traffic jams, and my latent desire to flog America’s litterbugs.

What exactly, has turned me into such a totalitarian scold? In part, I blame the sad Indian from those PSA’s in seventies. The one with a single plump tear running down his leathery face, as he stands ankle deep in roadside litter. He was the first to convince me that litterbugs were in fact, an inferior species. But I also blame the many people I’ve met over the years who have spent their lives cleaning up after the rest of us.

I refer to the garbage men in Chinatown, the tire recyclers in Washington, the frack-tank cleaners in Louisiana, and dozens of others who left me convinced that all meaningful conservation begins with individual responsibility. I’ll never forget the Gum Busters, a team of guys in New York who scrape the chewing gum off the sidewalks. If you think gum removal is a modest undertaking, look down the next time you take a stroll on a sidewalk – any sidewalk. You’ll see hundreds of irregular shapes on every block. That’s gum. It’s everywhere, a legion of cancerous moles dotting the pavement, darkened by the soles of countless shoes, and pushed deep into the concrete by the weight of oblivious passersby.

Here’s a question – How can we expect people to care about their “carbon footprint,” when they don’t even know what they’re walking on? How relevant is global warming to a people who still throw their crap out the window?

Some people believe the best way to discourage violent crime is to deal swiftly and decisively with non-violent crime. This belief is based on The Broken Windows Theory. The name refers to a famous study that proved a single broken window in a neighborhood – if ignored – would invariably lead to more broken windows, and ultimately, higher crime. Why? Because a broken window that’s ignored is a sign of neglect and unaccountability – two things that encourage more serious mischief. The theory is controversial, but the data is undeniable. Violent crime in New York took a massive decline after a “zero-tolerance” policy was instituted for things like graffiti and turn-style jumping.

So here’s another question: What if the Big Gulp on the side of the road is a “broken window?”

I’m no expert, but it seems to me that most of the “big” environmental challenges in todays headlines are impacted to some degree by our strange tolerance for litter, and our stubborn refusal to punish litterbugs in a way that might actually discourage their decision to treat our country like a landfill. Doesn’t it make sense to do all we can to discourage littering, before we try to argue the merits of windmills and electric cars? 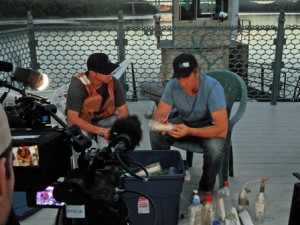 In my view, the answer is yes, which brings me back to caning, and my new show, “Singapore Justice!” I’m confident that all sorts of good things would happen on the environmental front if America could only see me whip the bare asses of a few hundred litterbugs on national television. I’m going to push CNN to green-light the pilot, but until that happy day, I’ll continue to honor the men and women who clean up the country in a more traditional fashion.

On tonight’s show, I’ll introduce you to a guy named Chad Pegracke. Chad’s got the best garbage route in the country. Many years ago, Chad looked out upon his cherished Mississippi River, and saw more garbage than water. He got angry, but unlike me, Chad isn’t obsessed with corporeal punishment. He’s obsessed with cleaning the river. Which is precisely what he’s done for the last 20 years. One piece at a time. The stuff he pulls out of the water will amaze you – baby dolls and oil drums, cash registers and motorcycles, messages in bottles to the occasional pick up truck.

Be advised. Watching tonights show will make you angry at man’s disregard for the land we all share. But you’ll be happy and proud to know that Chad and his merry band of garbage men are out there, fighting the good fight. Check him out tonight on CNN. 9ish.

PS Take a selfie of your TV with Chad and me in the shot. Post it here. Best photo gets an autographed Big Gulp…