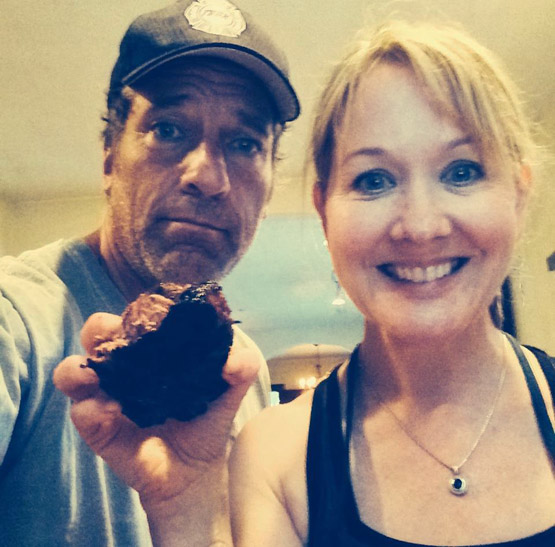 This is my friend Eileen. She’s turning 49 today, and celebrating the occasion with some delicious bavette steaks and a houseful of friends. Meanwhile, I’m looking for a last minute gift, and hoping to find something suitable lying around on the ground. It’s not as crazy as it sounds.

Four years ago, we were coming home from a dirty job in Alabama, (Lightening Rod Installer,) and waiting to board an oversold flight back to California. Eileen’s party was that evening, and I was not only unprepared in the gift department, I was unsure that I’d even make it back in time. As the gate agent announced the next delay, I wandered back to my seat and saw something truly shocking – a little baby, lying facedown in the corner of the terminal.

It took a moment to process, but once I was sure of what I was seeing, I ran over to investigate, and quickly realized my worst fear. The infant wasn’t breathing. I yelled for help, loudly, and turned the tiny body toward me. I noted the waxy complexion and the frozen rictus. Then, thanks to a few years of advanced first aid training, I was able to diagnose the problem – the baby was a doll. Specifically, a baby doll of African descent. His clothes were filthy, and he was missing a shoe. And he was covered with something that looked like oatmeal.

Satisfied that a human tragedy was no longer imminent, but feeling the eyes of many strangers upon me, I raised the doll above my head and addressed the crowded terminal. “Has anyone lost a black baby doll?”

No one said “yes,” but no one looked away either. And why would they? The Dirty Jobs Guy was standing in the middle of an airport, holding a baby doll over his head, making strange inquiries in a booming baritone. What might he do next? 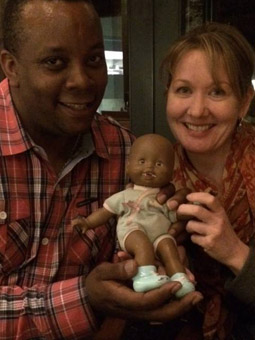 I asked a few more times, which elicited some collective giggling, and determined that the owner was no longer in the vicinity. Judging from the dolls overall condition, a spontaneous adoption seemed unlikely, so I began to look for a way to rid myself of the thing. But then I noticed the cameras. Dozens of cellphones were pointed in my general direction, and as people began to take photos, the PR implications of my situation became self-evident.

How exactly, does a white TV Host divest himself of a black baby on camera? Returning the doll to where I found it seemed disrespectful. A more involved search for the proper owner seemed absurd, especially since my plane was now boarding. And dropping it in the trashcan – where it was probably destined to wind up – was completely out of the question. No matter what I did, I could see it all play out on TMZ, along with the end of my career.

Ultimately, after posing for a number of quick photos (with the doll,) I handed it off to my producer and asked him to deal with it. Barsky complied by placing him gently in his backpack, and assuring me he’d provide the lad with a loving home back in Hollywood. And that was the last I thought about it, until I unpacked my carryon seven hours later and found the doll once again staring up at me with sightless eyes – this time from a tangle of dirty underwear. I jumped about a foot in the air, and screamed in a way that made me glad no one was listening. (Barsky is an excellent producer, but not to be trusted on long flights.)

The shock nearly killed me, but in that moment, I realized my gift dilemma was solved. I cleaned off the oatmeal, (or whatever it was,) put the doll in a shoebox, and hurried down the street to Eileen’s 46th birthday party. I got there late, but in time to present my friend with a brand new companion, along with my fervent wish that each of 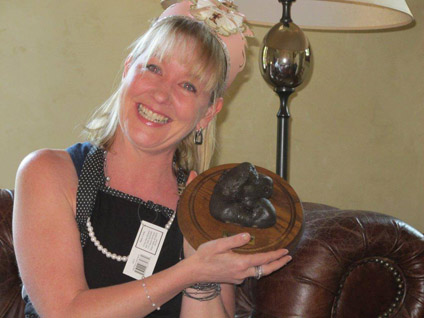 their lives would be forever enhanced by the presence of the other. That was four years ago, and as you can see from the photo, I’m happy to report the bond between Eileen and the doll has grown stronger every day.

The next year – three days before Eileen’s 47th birthday – I found a diamond ring in the street. (Honestly, I find the weirdest stuff, all the time.) It was a wedding ring, modest and well-worn. It seemed like Providence had sent another gift from above, and I was eager to commemorate Eileen’s 47th year with a stranger’s wedding ring. Of course, I first made some signs and posted them around the neighborhood, just on the off chance that the owner was bereft and devastated and searching round the clock for her missing keepsake, which turned out to be exactly the case. Unlike the doll, the diamond was returned to it’s rightful owner, and all Eileen got from me that year was a story about how she almost received someone else’s jewelry. Disappointing.

Last year, after forgetting her birthday yet again, I called my friend Deb Cano at the very last minute. Deb makes weird things out of fake feces, and was kind enough to overnight me a large pile of counterfeit dog crap, carefully mounted on a wooden plaque that reads, “You’re #2.” Like me, Eileen eschews our society’s fondness for participation trophies. As you can see, the gift was well-received, but really, it’s hard to compete with the thrill of receiving a fake baby, which brings me to the point of this post.

Today, Eileen is older than ever, and once again, like the little drummer boy, I am in her company with no gift to bring. (Freddy came through with a possible last minute solution, but a dead rattlesnake is maybe a bit too much, even for Eileen. See attached photo. More on that, later.) 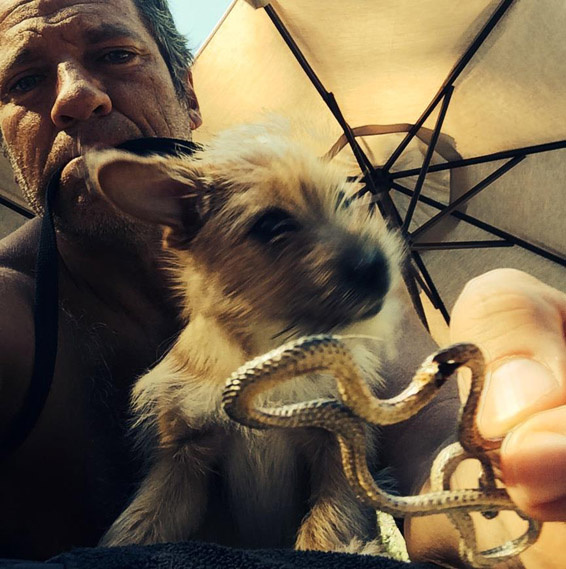 Point is, I’d like to mark my friend’s encroaching dotage with something memorable, so I thought perhaps – if it’s not too much to ask – that I might compile the sentiments of a few thousand people she’s never met, and show them to her a few hours from now. I know it’s an odd request, but it’s certainly consistent with the past, and I’d be honored and grateful if you’d participate in the weirdness.

So – Happy Birthday Eileen! From me, a black baby doll, a dead rattlesnake, the woman who got her ring back, and everyone who ever got a trophy they didn’t deserve. And of course, and most especially, from all the friends of this page who might second that emotion.