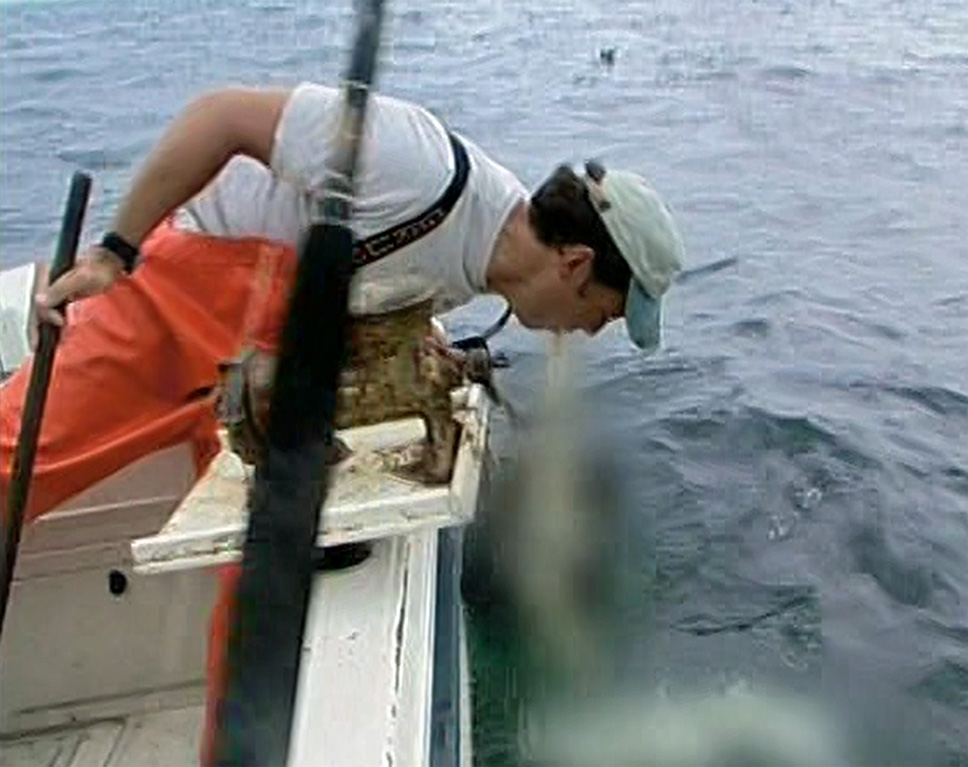 Good Morning. Here’s a quick story about vomit to start your day.

Captured in the photo is an image of your’s truly puking his guts up on a shark boat. The year would have been 2005, or thereabouts, and the vomit in question was produced by a combination of warm gin, consumed the night before, and a skillet full of scrambled eggs and potatoes, eaten that very morning. Contributing factors included a meat grinder packed with mackerel, a following sea, and the rough business of making chum on a warm and humid morning just off the coast of Martha’s Vineyard.

I’ve been thinking about this moment ever since I read Cathy Everette’s story about the tomato juice and fruit cocktail inspired puke. (Scroll down. It’s the top entry on the previous post. Funny stuff.) Even though my vomit contained none of the colors of the rainbow, it was notable. So much so, that the executive producer at Discovery demanded it be removed from the scene. I was appalled, and argued passionately that cutting it out made no artistic sense. The point of Dirty Jobs was to capture the reality of what it’s like to be in a particular place on a particular day. Puking was not a deliberate or salacious act, it was just a very relatable part of the job. In fact, my vomit occurred in the middle of a standup, and I was personally proud to have completed my thoughts after upchucking into the Atlantic. And, truth be told, I was rather impressed with the vomit itself. It wasn’t quite projectile – at least not in the Exorcist milieu – but it was both explosive and copious and more than sufficient to shock the unsuspecting Captain.

“God damn son, I thought I was gonna see the bottoms of your boots come up!”

Ultimately, the suits caved – sort of. It was determined, probably as the result of some soul-deadening focus group, that my vomit was in fact germane to the story, but simply too hideous to be viewed in it’s unaltered form. Thus, the network arrived at the rather incredible decision to pixilate my puke.

Looking back, my feelings about this were mixed, both then and now. On the one hand, I’m proud that Dirty Jobs broke a lot of new ground. After that scene, puking became generally accepted in reality TV, and now, unpixilated vomit is de rigueur on most cable channels. But I guess I’m ambivalent about opening the flood gates. As my dad often says, you can’t put the poop back in the goose.