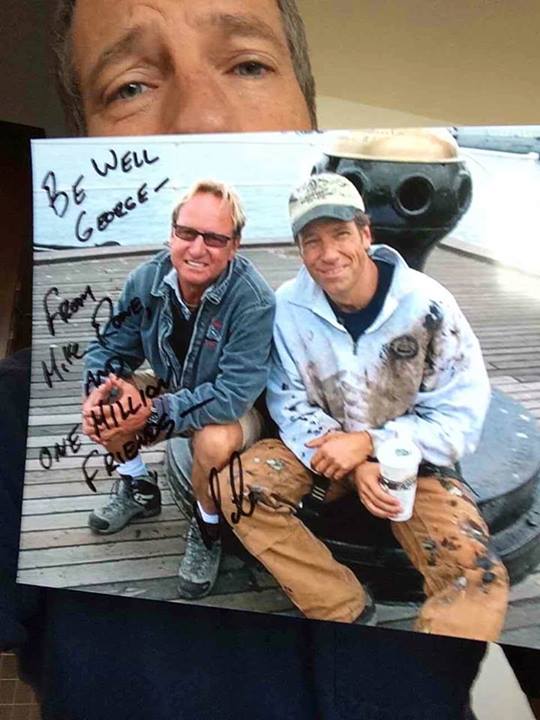 I have no idea where all you people are coming from, but I’m very glad you’re here. If this were another venue, I might burst out in a celebratory song. Alas, there’s no piano at hand, so I’ll say thanks with a laptop, and acknowledge a few things that have left me in your collective debt.

1. You’re Funny. Everyday I read something on my wall that makes me laugh out loud. Hopefully, I’ve returned the favor from time to time. Whatever else Facebook might allow me to do, there is nothing more satisfying than sharing a laugh and indulging in a bit of silliness. We forget that at our peril.

2. You’re Generous. It’s not a secret – I’m here in part because I run a Foundation that tries to raise awareness around a few million unwanted jobs. We also award Work Ethic Scholarships to people who are willing to learn a useful skill. Your generosity has allowed mikeroweWORKS to grow. I’m much obliged.

3. You’re Helpful. Also not a secret – I make my living in television, and I joined Facebook largely because I don’t believe that networks and studios and production companies should get between viewers and the people they choose to watch. On Dirty Jobs, I benefited mightily from viewer suggestions. With Somebody’s Gotta Do It, we’ve already received thousands of great ideas. Pretty cool. I want SGDI to be programmed and hosted by friends of this page. You’re already making that happen.

3. You’re Loyal. When partisans on either side stop by to puke up their rage or spank me for “consorting with the enemy,” your defense has been a great surprise. While I don’t require and would never request that kind of support, I sure do appreciate it. From The Bill Maher Haters to The Glenn Beck Haters to The Walmart Haters…the loudest voice on this page has become the collective cry for common sense and reason. It’s been a real pleasure to see that voice drown out the shit on sidelines.

4. You’re Kind. Yesterday, I told you about a soldier I know named Travis Mills, who sacrificed more than most of us can contemplate. Twelve million people have seen that post so far, and thousands have responded with personal comments that have reached Travis and his family. That’s nothing short of awesome, and I know they’re all touched. As am I. Also, I told you last week about George Sutherland, a friend from Dirty Jobs who had been hurt in a crane accident. After that post, many thousands of you left George your good wishes and sincere hopes for a speedy recovery. George was quite simply, overwhelmed. He sent a note to my office, which he struggled to compose from his hospital bed. Part of it reads…

“I am so thankful and blessed for all the kind words that followed Mike’s post, and for those chance encounters with people such as Mike. To all of you who have supported me with thoughts and prayers, I offer my deepest and heartfelt – THANKS. George.”

6. Finally, let me add that you’re all incredibly smart, sexy, savvy, and sophisticated in ways that continually transcend my expectations of social media. You also challenge the assumption that no one on Facebook is capable of reading a post with more than 50 words. Much of the species now appears to be limited in this way, but you are not, as evidenced by the fact that you’ve come to the end of another windy diatribe from you humble host. For that, I can only repeat myself one more time – Thank you very much.