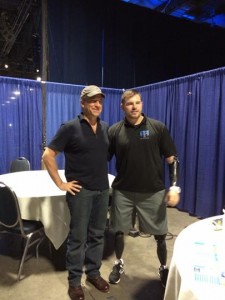 As you can see, Travis has undergone a few structural modifications, most visibly in the leg department. Likewise, his left arm is more machine than flesh, and though his right arm appears to be around my waist, it really isn’t. Like the rest of his limbs, it’s been missing in action for some time.

I met Travis a few weeks ago in DC at The Science and Engineering Festival, and spent a half hour talking, mostly about Dirty Jobs. He wanted to tell me how much he and his buddies appreciated that show while on active duty. He wanted to know what it was like to work in so many “difficult and dangerous situations.”

Can you imagine? How exactly does one answer a question like that from a guy like this?

On the day we met, I was a little stressed out. I had just moderated a panel on the main stage, and I was rushing to the other end of the Convention Center to meet with a bunch of CEO’s to discuss mikeroweWORKS. I was late, and there were three-hundred and fifty thousand people between me and where I needed to go, all of whom wanted to say hello and take a photo. My security team was cutting a swath through the crowd, and I was trying very hard not to look like a complete douche. Then one of the event organizers ran over and grabbed my arm.

“That’s nice,” I said. “Tell him to get out here and do it.” I was walking fast, head down, determined to maintain forward momentum. If you stop in a situation like that, you never get started again.

“Well,” said the guy, “it would be easier if you came to him. It’ll just take a second.”

“Uhh…not exactly. But he’s just around the corner. I think he was in the war.”

I told the security guys to sit tight, and followed the guy down a long hallway, looking at my watch as we fast-walked into the backstage area. Then we ducked behind a blue curtain, and Travis Mills stood up to greet me. Actually, he kind of unfolded himself from a chair, and came toward me with a very wide smile. He then extended a prosthetic arm and offered a plastic hand, which I automatically shook.

“Mike Rowe! What an honor! I’m Travis Mills, and I’m very, very pleased to meet you.”

I’ve seen a lot of things over the years, and I’ve gotten good at pretending there’s nothing unusual when there clearly is. But I was completely unprepared for this.

“No big deal. It’s been two years now. I’m good. Tell me something though – are you gonna do anymore Dirty Jobs?”

“Dirty Jobs, man! When are we gonna see some new ones?”

“Well Travis, that show was cancelled. I’m working on something new though that I think will be just as good. Maybe better.”

“Hey, that’s great! I got new legs and you got a new show! Tell me all about it!”

That’s how the conversation started. My show. My foundation. My book. Etc. But I eventually steered it back to him, and learned that Travis is one of only five quadruple amputees to survive that level of injury in the recent wars. He has a motto: Never Give Up – Never Quit. He has a Foundation. He’s featured in a new documentary. He also has a wife and a kid, and a deeply personal commitment to help other wounded Vets cope with their injuries. But when I asked why I hadn’t seen him in any of the typical commercials and PSA’s for wounded veterans, his answer was stunning. He said he didn’t consider himself to be wounded.

“I’m not a victim, Mike. And I refuse to be portrayed that way. Case closed.”

Fact is, Travis is missing more than a few original parts; he’s missing all traces of self-pity. And that’s presents a challenge for mortals like me. Because it’s a hell of a thing to feel put out because a crowd of fans are making me late for an important meeting, and then listen to a guy with no arms or legs tell me how lucky he is, and how much he appreciates all my hard work.

That’s called a gut-check, and I could use one from time to time. Especially on Memorial Day, when the biggest decisions I face are what to grill and which type of frosty beverage to enjoy. This year, as I resolve these and other important issues, I’ll think of Travis Mills. A guy who went out on a limb for me, in every way possible.

Thanks Travis.
And Happy Memorial Day to you all.

PS. His story is incredible. Check it out, if you have the time.

This story has been picked up by a number of outlets. Take your pick.

The Blaze on Travis Mills

Learn about the documentary  – Travis: A Soldier’s Story Documentary

One thought on “Mike’s Experience With Travis Mills”