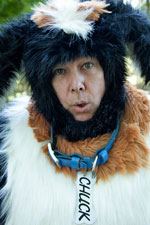 When you’re a freelance actor struggling to find work in an industry where unemployment hovers around 95%, you have two recurring dreams:

• Finding a friend with steady work on a hit TV show.

Personal relationships in show business are very important, and the easiest way for an actor to find a job is to be good friends with someone who already has one – someone like me. I say someone like me, because being friends with me specifically won’t do you much good. Unless you’re willing to put on a dog suit and sweat your butt off for three days in Valencia.

Such was the recent fate of my good friend Chuck, a talented actor who makes an honest living in Hollywood, a town without pity if there ever was one. Unfortunately, Chuck is not friends with Mark Harmon

, John Hamm, Ed O’Neill, or some other big-shot that could get him a cushy job on a respectable show. Chuck is friends with me. Which is how he came to be pictured here, dressed up as a giant Bernese Mountain dog, crapping in my front yard.

This is probably not the creative vision that Sentinel had in mind when they first approached me about a campaign to highlight their product. However, it didn’t take too much time (or too much

wine) for everyone to get behind the inherent wisdom of jamming a well-respected stage actor into a dog outfit and hoping for the best. The finished product is self-explanatory. Chuck plays my best friend – an identity he’s perfected in real life for the last 35 years. It’s a role that requires extraordinary patience and boundless talent. I play myself – a role that requires very little patience and no talent at all.

The videos we created take a poignant look at the interpersonal dynamic between best friends, and the unforeseen challenges that arise when a plague of uninvited house guests upend the fragile tranquility of their neatly ordered lives. In other words, my dog gets fleas and all hell breaks loose.

I think The Dirty Truth About Fleas is the feel good hit of the summer, and an acting tour de force. Chuck’s performance will confirm that I did not merely throw my old friend a bone. No, he was clearly the best friend for the job, bringing warmth and nuance to a role that in lesser paws, could have brought a deep and abiding shame to both species.

I hope you have as much fun watching these vignettes as we did making them, though I seriously doubt that’s possible. I want to thank Colle+McVoy and Novartis for giving us such a long leash, and letting us bark up a most unusual tree. As for Chuck, he’s already out there looking for his next gig. Hard to say what it’ll be, but in this dog-eat-dog economy, where one year can feel like seven, and blood-sucking parasites scramble to attach themselves at every turn, I have no doubt the old fella will find a way to bring home the bacon. For an old dog, he’s learned more than a few new tricks, and

demonstrated a willingness to slip into something a lot less comfortable than the usual costume.

Unless of course, he’s made friends with someone on the Jersey Shore.

In which case, I would advise him to call Snooki. With all due speed.