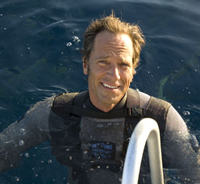 Mike recalls his 2006 Shark Week adventure  for the Discovery Channel.

One day down the road, when I’ve had an opportunity to fully digest the events, I’ll look back on April of 2006, and shake my head in wonder and gratitude.

I arrived home to San Francisco, by way of Baltimore, by way of Nassau, by way of Bimini, by way of Durban, by way of Cape Town, by way of Johannesburg. My crew and I have seen some sights, and return home with more than a few memories, and a story or two that may be worth telling. We have survived the wanton attacks of a deranged monkey, come face to face with Carcharodon Carcharias, and looked down toward Antarctica from the very tip of The Dark Continent. It was not all that dark on the day in question, but The Cape of Storms lived up to its name, with high and steady winds that seemed intent on blowing us off our perch and into the sea. The daily wonders are too numerous to recount here – Table Mountain, Cathedral Pass, False Bay, the excellent local wineries – they all deserve more than a casual mention, later perhaps. For now, I will spend a paragraph or two on our most recent trip to The Bahamas.

Going in, my expectations were low. How could the sharks in the Caribbean measure up to the monsters we had seen in Africa? How much closer can you get to a shark than six inches from the open mouth of a Great White? Well, as it turns out, quite a bit.

On Bimini, I met a character called Doc Gruber who runs a research facility called The Shark Lab. There, I was given the opportunity to create a new form of shark repellant, and test its efficacy in a real world setting. This particular repellant is created from the corpse of other sharks, and required me to remove most of the flesh from a rotten shark that had expired several weeks prior. Lovely. Then, after much chemistry and complication, we headed out to sea with and several cans of repellant and a bucket full of chum. When we were far enough from shore to abandon all hope, I created a chum slick, which quickly caught the attention of several dozen ravenous reef sharks. Then, I jumped feet first into the middle of a feeding frenzy with an aerosol can full of a substance “guaranteed to repel all sharks.” If you’ve never leapt directly into a thrashing mass of hungry sharks before, let me assure you, it’s an experience that lingers. In good conscience, I can neither recommend nor endorse such activity. However, I’m happy to report that the repellant works, and drove the sharks off with all due speed. This gave me enough time to scramble frantically back into the boat before they returned, hungrier and angrier than before.

On to Nassau, here, the point was to make and test a “shark suit,” a steel mesh contraption consisting of several hundred thousand tiny, metal rings that must all be welded together by hand. To test the suit, I headed out to sea, again. This time, I was accompanied by Jeremiah Sullivan, a dyed-in-the-wool lunatic who fears nothing and should have his own TV show. Jeremiah and I proceeded to create a massive pond of blood and tuna bits. Many dozens of sharks appeared, and surrounded the boat in a frenzy of uncontrolled dining. The water was a boiling mass of gray skin, red blood, and white teeth. Then wearing full scuba gear and shark suits, Jeremiah jumped directly into their midst. I followed. Together, we descended 50 feet to the bottom. I knelt next to him as he opened a bait box full of bonito. Sharks love, really love bonito. Within moments, the pandemonium that had existed on the surface was transferred to the ocean floor. We then began the actual job, which was to test the effectiveness of the suits we were wearing. In other words, get bit by sharks, on purpose.

I was bit 4 or 5 times, Jeremiah, many more. We’re both fine, albeit bruised. Shark suits work. Hallelujah.