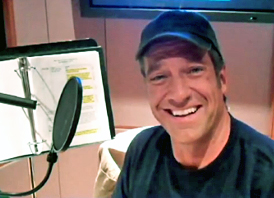 From Mike’s forum on Discovery:

Do you ever meet with other voice over actors – the ones who narrate the other DC shows? I know your schedules tight, but is there a trade group – like SAG for film actors, conventions? – N

Voice over conventions – that’s funny.  Who would be the announcer?

At the highest level, there are two or three dozen people that you have never heard of that do most of the lucrative work – high profile narration, network promos, and commercials. Collectively, this group probably earns upwards of 60 million dollars a year. I’m friendly with many of these people, and play cards with several of them from time to time. There is no club however, and no secret handshake.

The next tier consists of maybe 1000 voiceover professionals who all earn 6 figures or better, and fight viciously over the scraps from Tier 1. This group is comprised of some truly talented men and women who are dedicated to the work, and audition constantly. I have a good friend in this group, who spends at least 40 hours a week auditioning, and books maybe three jobs a month. He makes around $60,000 a year, and never knows where or when the next job will come from. He’s typical of the group. Some have agents, some do not. Most belong to SAG and AFTRA, but others do not. The union thing is touchy these days.

The remaining voiceover artists, and vast majority, earn less than $10,000 a year. In general, they are bad actors who have been told by friends and family that they have a nice voice and should get into the business. These people get just enough work to be encouraged, but are usually cranky and frustrated because they hear the same people over an over and can’t understand why it isn’t them making a fortune. You would be surprised at how unimportant a “good voice” is to most voiceover. It matters, but nearly as much as people think.

3 thoughts on “Relatively Speaking about the Voiceover Community”