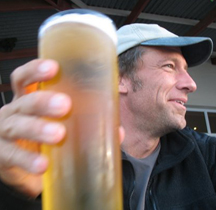 Part of the ‘Mike Rowe’ appeal is that you come across as an “Average Joe” yet a “Renaissance Man” – well read, polite, caring about those you work with, self-deprecating, great sense of humor, an appreciation for good music, fine wine & opera yet you are seen sitting around barefoot, drinking beer with a baseball cap on & have an appreciation for the working guy. You are also willing to try things even after stating your reluctance to do so. You are too normal. It makes people think of you as a friend rather than a celebrity – which is unrealistic. How do you stop people from breaking boundaries? – M.H.

Thanks. You’ve said some very nice things about me, and I’m grateful. But I want to go back to the larger concept of celebrity in general. This occurred to me as I read your post.

We desire, before we acquire.

Most everything we own, from material things, (like F150’s) to close friendships, spring from some sort of initial desire. We arrange our lives to make room for the things we want to possess. Usually, that requires us to replace something we no longer desire as much, i.e., a trade-in. We spend our lives rearranging the order of things and making room – out with the old in with the new. It applies to everything – furniture, cars, jewelry, and art, rugs, and yes, people. In all things, we prioritize.

Celebrities know that their appeal is built on desire. People desire to be near them to talk to them, touch them, to form a connection, that connection is made on the big screen, the small screen, the radio, the magazine, and now, here.

The reason I’ve responded to so many questions on this particular topic is because I am still not sold, in a very general sense, that this kind of interaction is a “good” thing. Is it fun? Sure. Interesting? Yeah. But good…?

There’s an interview in Time with the stars of Oceans 13. It’s very insightful, and fun. Clooney makes the point that our concept of celebrity has changed, and proves it by asking “how many kids does Robert Redford have, and what are their names?”

Does he even have kids? Do I even care?

The last generation of celebrities handled themselves differently. Newman and Redford were 50 feet tall, and that’s how we were comfortable connecting with them, in a dark theatre, larger than life. Today, we desire to know more. We desire to know everything. We want access. “Katie’s pregnant? Brittany’s bald? Paris is guilty? Brad? Jennifer? What’s going on?”

This new level of desire, combined with this delivery system and the celebrity’s willingness to feed it, is interesting, because ultimately, it is doomed to failure.

The relationship between a celebrity and a fan is not built on reality. It’s built on perception. The longer that perception is maintained, the longer the relationship will last. That is fact of which I am certain. And yet, there is a collective cry from the masses for more information and more access, and a surprising willingness from our biggest celebrities to provide it.

I’ve come to believe that that dynamic is counter-intuitive, and will destroy the relationship both parties claim to desire. Ironic, no?

These are time honored truths that have flown out the celebrity window.

16 thoughts on “The Concept of Celebrity”