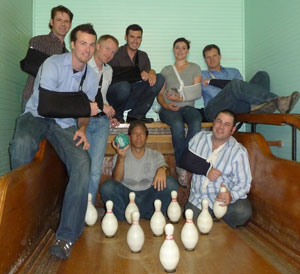 Started in Peoria, where I got to know the big shots over at Caterpillar, and some of the smaller shots as well. Really an amazing company and a

very nice bunch of regular folks. They love, love, love mrW, and we’re going to do some very cool things together. Took a tour of the factory, gave a speech of sorts to a few hundred office types, had a turkey wrap with the new CEO, gave another speech, and shot some promos for the upcoming Con Expo thing in Vegas. Also had a great dinner at Denny’s (not the restaurant, but the home of one of the big shots) and left with an extraordinary bottle of rare Australian port. Shortly, it will go from “rare” to “empty.”

Headed from there up to Mackinac Island to shoot another Dirty Jobs special. This one is called Dirty Conversations, and proves beyond a shadow of a doubt that Dirty Jobs is little more than a talk show without a set and a bunch of smart aleck guests with dirty minds. It also proves that I will return to Mackinac for any thinly veiled excuse imaginable.

The crew and I had a ball, as did the twins who accompanied me throughout the show. Some of you will recall the Maedel sisters, Carolyn and Marilyn.

Well, they’re back – chattier and charminger than ever before, finishing each other’s sentences and recalling their favorite moments from Dirty Jobs with more enthusiasm and encyclopedic accuracy than yours truly could ever hope to match. For identical people, they’re utterly original. And how they wound up in my bed at 3 am one evening is a tale so harrowing and disturbingly true that the details will need to be vetted by my imaginary publicist. Suffice it say that Barsky was to blame, and my journal now has another long and troubling entry.

The next day, (or maybe it was the day before?) some people from another Fortune 500 Company flew to the island to discuss a relationship with mrW. This was unexpected but very good news. Any company that supports manufacturing and skilled labor is a welcome, and this is a big one. It seems likely we’ll find a way to work together on something, at which point I’ll be able to refer to  them by name.

From Mackinac it was down to Detroit for a few days with Ford, and then over to New York to participate

in something called Ad Week. Ad Week in Manhattan is a lot like Fashion Week, without the skinny models and silly clothes. People come from all over to discuss what’s new and exciting in the fascinating world of crass commercialism, and I was invited to speak about how mrW is changing the way many companies view the spokesperson/customer dynamic. Very flattering.

I talked mostly about the tension between authenticity and production, and the difference between a host and a guest. I argued that the traditional spokesperson was an endangered species (Howie Long) and shared my view that celebrities who get paid to hit a mark and read a prompter are overpaid at any price. My friends at Lee and Caterpillar also participated, and explained to a baffled crowd how I insisted on interviewing them at length before agreeing to do business. (Hey, who says an audition can’t go both ways?)

Then it was down to DC to scold Congress for not watching DJ. Actually, I went there to officially launch

a campaign called “I Make America,” or IMA, which I tried but failed to rename “I Make a Mess.” Sponsored by The Associated Equipment Manufacturers, or AEM, IMA is the latest co-branded venture for mrW, which in my mind is A-OK. The initiative is designed to highlight the contributions of hundreds of real people who work in manufacturing, and ultimately reverse a pile of lop-sided trade agreements and harebrained policies currently destroying our ability to compete with modest little upstarts like China and everybody else.

This was my first experience addressing our elected officials and probably my last. That’s not to say that it didn’t go well – I’m told the event was a resounding success. But Washington DC is a place unto itself – a giant, sleepless PR mechanism that never pauses or slows down. The reporters’ questions to me were esoteric and very detailed, which or course lead to thoughtful responses like “Beats me,” and “You don’t say?” I’m not an expert on free-trade and foreign currency fluctuations, and after Colbert’s performance last month in front of a similar crowd, I was determined to be myself, tell the truth and keep it simple. This seemed to confuse people at first but whatever – I relied mostly on the Dirty Jobs mission statement and argued that our problems in manufacturing were really just another symptom of a dysfunctional relationship with dirt, work, and skilled labor. It actually played pretty well. I just had to repeat it till I was hoarse. Earlier that morning I wrote an op-ed piece for U.S. News and World Report.  Apparently, they actually printed it.

From there it was back to the hotel for an all night conversation with my friends at Discovery who have become curious about what I might have planned for the next stage of my Forrest Gump inspired career. As some of you know, my current deal with the Network is closer to its end then it’s beginning, an undeniable fact that causes my masters in Silver Spring to frown at their productions schedules and ask questions like, “Now what?” Though we failed to resolve that question, we did succeed in destroying another mini-bar and promised to revisit the matter a few seconds before my contract actually expires.

The flight home from DC would have been direct, but for a quick detour in Milwaukee and another meeting that was almost too good to be true. Master Lock. This is another remarkable company with a real commitment to skilled labor and a genuine desire to help support mrW. Who am I to say no? Standby for more on that as things develop.

That’s enough for now. I’m taking another nap and wishing you all a pleasant week.