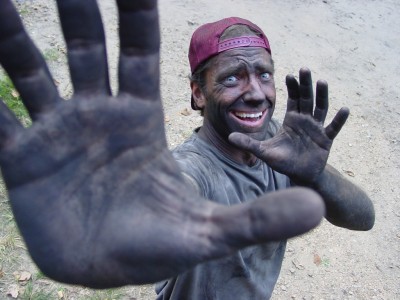 Mike Rowe, the host of Dirty Jobs, is building a resource for skilled trades, sounding off about the false dichotomy of blue versus white collars, and extolling the virtue of good old-fashioned filth.

As the creator and host of Discovery Channel’s Dirty Jobs, Mike Rowe has wisecracked his way through almost 300 apprenticeships at some of the country’s hardest jobs, poking fun at himself whenever possible, and demonstrating that hard work and good humor go hand in hand. In 2008, Rowe launched his website an online resource center for anyone looking to explore a career in the skilled trades, which provides job listings, connections to apprenticeships, and more. Today, Rowe speaks regularly on the perils of the widening skills gap and the changing definition of a “good job.”

GOOD MAGAZINE: What do you think it means to have a “dirty job,” or a job that most people would not want?

MIKE ROWE: Attitudes toward hard work have changed, and not for the better. Many people view dirty jobbers with a mix of pity and derision. Some ignore them altogether. However, one thing is unchanged: People with dirty jobs make civilized life possible for the rest of us. For that reason, I see a willingness to get dirty as a mark of character.

MR: Once upon a time, we were proud to be dirty. Dirt looked like work, and work was revered. Now, we’ve redefined our notion of what a “good job” looks like. We’ve taken the “dirt” out of the formula, and in the process, marginalized a long list of important professions. Big mistake.

G: How are we going to suffer by demonizing dirt?

MR: Lots of ways. Unpaid student loans, a crumbling infrastructure, a widening skills gap. A third of all skilled tradesmen are north of 50. They’re retiring in record numbers, and no one is there to replace them. We’re not sufficiently gob-smacked by the accomplishments of skilled labor. And so we don’t encourage it. Even as thousands of college graduates return to Mom’s basement, hopelessly in debt and with no prospects in their chosen field. It’s madness.

MR: No. But a four-year degree is not the only way to acquire useful knowledge. Trade schools, apprenticeships, community colleges, on-the-job training, the kind of learning we dismiss as “alternative education,” is every bit as viable as a traditional sheepskin diploma. Maybe more so. And a hell of a lot cheaper. We need to stop promoting one form of education at the expense of another. It’s stupid.

G: Can you prove any of this?

MR: Of course not. I’m the host of a show on cable TV. But reread your first question. In it, you imply that a “dirty job” is another way to describe a “job that most people don’t want.” That implication is widespread. We’ve been gradually training our kids to equate dirt with vocational dissatisfaction. The real enemies of job satisfaction are drudgery and boredom, and those can be found just as readily in cubicles as they can in ditches. The state of Alabama seems to understand that. They have used mikeroweworks.com as a model and a resource to launch their own initiative for skilled labor.

G: How is that working out?

MR: Really great. Go Build is a statewide initiative in Alabama with the same goals as our website, and I agreed to speak on their behalf the moment they called me. We’ve shot half a dozen commercials so far. I’ve also introduced them to my friends at Caterpillar, who are supporting their efforts with advertising dollars. It’s been a success all around.

G: One of your Dirty Jobs fans expressed concern that you were becoming a “do-gooder.” Does this worry you?

MR: Maybe a little. People have become suspicious of celebrities with causes, and frankly I don’t blame them. But the truth is, Dirty Jobs begins every episode with a promise from me to celebrate “the hardworking men and women who do the kinds of jobs that make civilized life possible.” Mikeroweworks.com is just the next phase of that mission. Without all the fart jokes.

G: What does it mean for the American character that fewer people are pursuing jobs in the trades, and are instead working in offices?

MR: There is nothing wrong with working in an office. There is nothing wrong with getting a college degree. The flaw in our character is our insistence on separating blue-collar jobs from white-collar jobs, and encouraging one form of education over another. Why do we value one above the other, when our future depends upon both? That’s our blind spot.

G: Does immigration, and illegal immigration, ever come up in the filming of the show? A lot of times the least desirable jobs fall to those who have the least opportunity available to them.

MR: I couldn’t care less about where a particular worker comes from. Nor am I interested about the perceived “desirability” of one job over another. With national unemployment still through the roof—and millions of people looking for legitimate work of any kind—I’m not inclined to portray anyone legally employed as “disadvantaged.” This question—and I say this with all respect—goes to the earlier point of pitying people who work hard or get dirty. I try not to go there.

G: What, really, is the dirtiest job?

MR: Lately, I’ve been reminiscing about bone black, a process whereby cow bones are turned into a fine black powder and then sold to cosmetics companies. The substance is like black baby powder, and gets deep into your pores and lungs and pretty much anything else. I was unrecognizable by lunch, and not much better after three showers. A week later, I still looked like Adam Lambert.

G: Which of the dirty jobs would you be the most willing to take?

G: Who would you recommend to host Clean Jobs, if it existed?

MR: Howie Mandel is germaphobic. Can’t even shake hands. He might work out. Though I gotta say, it sounds like a boring show

To read the article on Good Magazine’s site, click HERE.