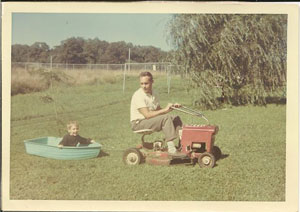 Yard work. Never cared for it.

Maybe it’s because I grew up in a giant yard in the middle of a forest? Or maybe it’s because the chores never seemed to end? Or maybe it’s because my father embraced a pointless but unwavering commitment to landscaping and curb appeal?  Beats me. I can only tell you that my brothers and I were drafted into this eternal conflict at an early age, with what one might call a conspicuous lack of basic training.

Armed with a vast array of modern weaponry, we were sent out every weekend to confront a determined foe. Acres of grass that refused to stop growing, weeds that laid siege to the perimeter of my parent’s farmhouse, and magical trees that needed to be pruned every few hours. We were doomed to fail of course, and overwhelmed by the futility of it all, which is why I now live in a condo. So then, why did I have so much fun last month, laboring for 10 hours in the back yard of a total stranger? Mostly, because the stranger was this guy – Sgt. Peter Mavropolous.

Peter came back from Iraq a few weeks ago from his second tour, and found his property an overgrown shambles.

flaked out, and after two years of neglect, Peter’s yard slowly morphed into a condemned lot. (Can you imagine? I mean seriously – what kind of slacker agrees to look after a soldiers property and then lets it go all to hell while his buddy is off getting shot at in a foreign land?) Happily, a group of volunteers materialized, and spent their Saturday restoring Sgt. Peter’s place back into the home it looked like when he left two years earlier.

It was really a lot of fun. Several dozen people showed up to help. Neighbors

pitched in. The Dirty Jobs crew assembled to capture the action, Barsky got to boss people around, and when we finished, Sgt. Pete got all choked-up with gratitude and appreciation. He wasn’t alone. All in all, a very rewarding day – kind of like the barn-raising scene in Witness, (without Harrison Ford or the barn.)

How do I get sucked in to these things?

Fair question. I think this one started when somebody at the network told me that Cub Cadet was interested in spending some of their marketing budget on Dirty Jobs. (Thanks Cub!) I’m always relieved when Dirty Jobs finds a new sponsor, but I worry that companies are always looking for some sort of product integration deal, which can sometimes get complicated. (Hey Mike, we need you to use our lawn mower in the sewer! Is that cool?) Happily, as we began to discuss the various ways we might work together, I learned that Cub Cadet was open to some creative ways to work together. And at some point, I learned about their involvement with a non-profit group called Green Care For Troops.

As some of you may know, I’m involved in a number of vet causes, and the more I sniffed around Green Care For Troops the more I liked what I smelled. Thousands of soldiers face a litany of problems when they’re deployed, many of which affect their families and spouses. Simple things like basic lawn care can become a real challenge, and Green Care For Troops was formed to help guys like Sgt. Pete while they’re overseas. Very cool. I also liked the fact that Cub is the major sponsor of this organization, and figured they were genuinely committed to the cause. So I met one of the big-shots at Cub and suggested that we show off their (fantastic) line of (quality) lawn care equipment while spending a day on the job with Green Care For Troops. (Am I clever or what?) Well, Cub couldn’t have been more eager. The exchange went like this.

Cub Cadet Bigshot:       How about tomorrow?

So I put on some work boots, hopped on a plane, and joined some volunteers from Brickman Landscaping at Sgt. Pete’s house in Southern California. (See how fast things happen in Hollywood?) Ten hours later, the work was done. Now, Dirty Jobs has a new sponsor, Sgt. Pete has a new yard, and hopefully, Green Care For Troops will have some new publicity.

As for me, I’m awash in the self-satisfied glow that can only come from hard physical labor performed in the service of somebody more deserving than yours truly. If this makes you envious, don’t be. You can volunteer too, and spend a few hours with some other likeminded do-gooders who want to make a soldiers house look like a home – a Green Zone, if you will.

Seriously, as causes go, this is a good one, so please watch the video we created that day.  And if after viewing, you should find yourself compelled to express your enthusiasm with a modest purchase, might I direct your attention to a custom made, completely original, infinitely collectible Green Care/Dirt Shirt?

Some of you are no doubt familiar with The Original Hawaiian Dirt Shirt Company. (If you’re not, you may get familiar here.)

Cub Cadet and Dirt Shirts have graciously arranged to make a few custom shirts available, commemorating the events of that day. The shirts are dyed in genuine American dirt, and dutifully modeled by the only one at mikeroweWORKS with the courage to stand in the unforgiving glare of high fashion. (Please, don’t hate me because I’m beautiful.)

The front of each dirt shirt features the mrW logo. The back contains my Top Ten Reasons to support Green Care For Troops.  It took me nearly two minutes to write these down, so please, reward my creativity with a modest purchase, and wear it some place fancy.  MrW will donate a portion of the money received from the sale of each shirt to Green Care For Troops. Another portion will help keep mikeroweWORKS up and running.

Anyway, that was my day with Green Care For Troops and Cub Cadet, and this is your mission.  Watch the video, here.   Buy the shirt, here.  And better yet, volunteer your time in the yard of someone who volunteered theirs – someplace much worse.