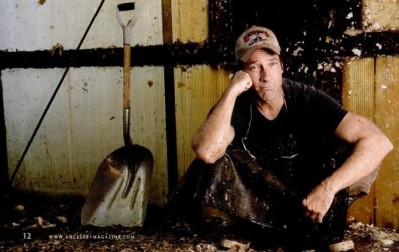 Mike remembers the blue-collar influence of his grandpa and tells how he did follow the blueprint of his grandpa’s life when it came to learning a trade – it was just a different kind of trade.

It’s a safe bet that Mike Rowe’s résumé is longer than yours. As the host of the Discovery Channel’s Dirty Jobs, Mike has rolled up his sleeves to try out more than 200 different — and wonderfully distasteful — blue-collar trades. And it all started thanks to his Grandpa Knoble.

“My grandfather’s life was much harder than mine,” Mike says, “but he was richer and amazingly free. He had quiet moments of competence. The man never read instructions, [but] he could build an engine from the ground up.”

Grandpa could do everything Mike couldn’t do. With only an 8th-grade education, Mike’s grandfather became a master electrician and plumber. He’d leave early in the morning clean and come home filthy. Mike wanted to do the same. “But I wasn’t that guy,” he says. “The influence of my granddad blinded me to the fact that I didn’t get that gene.” Eventually, reality crept in and Mike understood that he wasn’t a fixer, wasn’t someone who could create things with his hands. “So I went in the opposite direction — entertainment.”

Mike did follow the blueprint of his grandfather’s life when it came to learning his own trade: he opted for hands-on experience. Mike bluffed his way into a slot with the Baltimore Opera. He learned the television business by landing a job with QVC. Then he was ready for the big time.

“I went to Hollywood totally influenced by the execution and work ethic of the blue-collar worker,” Mike says. “All I was able to ultimately imitate was the way in which they worked, but it was enough.”

Mike notes that today’s jobs don’t compare to the ones back in Grandpa Knoble’s day. Society, he says, has redefined a good job — there’s no dirt and no risk. But Mike still maintains that blue-collar workers have the best gigs. “They have ownership, a sense of completion. There’s a beginning, middle, and end,” Mike says. “You pull them out of the mix and it’s the Wonderful Life paradigm. What would we do without guys like garbage men?”