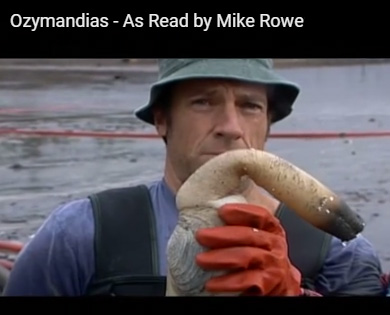 Dear Mike – When you have a moment, would you please explain this video? I found it last night while searching for something that had nothing to do with you, and now I can’t stop listening. With headphones, it might be the best thing I’ve ever heard. And visually, it might be the weirdest thing I’ve ever seen. Also, if you wouldn’t mind, please narrate everything in the future. Thank you. Russ Stratton.

Hi Russ. Four years ago, I was in the booth narrating a special for Discovery. Afterwards, Matt the Engineer asked me if I was a Breaking Bad fan. I said yes. Matt then asked if I had seen the current promo for the final season. I said no. Matt described Bryan Cranston’s reading of Ozymandias as “epic.” I took that as a challenge, and because I happened to know the poem, I recited it with all the drama I believe the text deserved.

Matt was inspired. He found the music from the original Breaking Bad promo, and mixed it with my vo. Then my friend Kristen, a delightfully unusual producer who happened to be loitering at the studio that day, suggested that Matt put the footage from the special I had just narrated on top of Percy Shelly’s magnificent poem. Matt complied. I approved. Kristen posted.

And that’s how that happened.