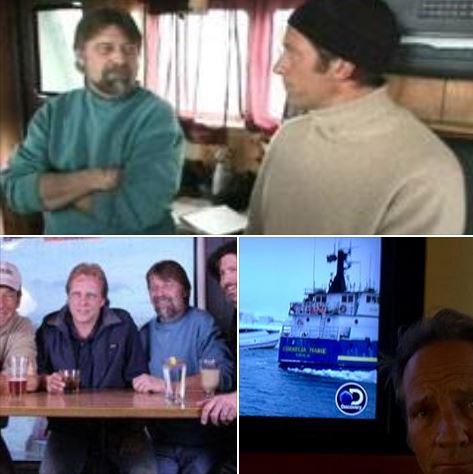 I’ve been listening to you all day narrate the best show on television. (Next to Dirty Jobs, of course.) You are truly the voice of The Bering Sea. I just watched the episode where Phil died, and wept all over again. I don’t cry much, especially at reruns, but that episode destroys me every time. You wrote a eulogy of sorts, back when Phil passed. Would you mind posting it again? Thanks.

It’s been a privilege to tell the stories of these fisherman. I’ll see the Captains this week in LA for a Season premiere party, and I strongly suspect we’ll drink a toast to Phil. Here’s what I wrote when he died, back in 2010. Hard to believe it’s been seven years…

PS. I’m watching with you…

A few years ago I was in Seattle, preparing to film the first round of After the Catch. For those of you unfamiliar with the program, After the Catch is a talk show in a bar, where The Captains and crew from Deadliest Catch gather to chat about this and that. I impersonate a moderator, and do my best to keep things on the rails. (Think Charlie Rose with cigarettes and whiskey.)

Anyway, on that first day of shooting, I arrived a few hours before filming began, and observed the kind of chaos that one can only find around a TV production. We were going to be shooting in a style called “Live to Tape,” which means we’d record the show in real time, as though it were a live production, but edit later for content. (Can you imagine filming the Captains with no time delay?) Consequently, there were at least 7 cameras positioned around the big table, and all kinds of lights hanging from the ceiling and poking through the windows. The plan was to record two shows in one afternoon. Producers and directors and cameramen and all manner of production personnel were milling about, and there was a real sense that no one actually knew what the hell was going on. Which was indeed the case.

As the Captains took their places around the table, it was clear they were not entirely sure what to expect. I can’t say they were nervous, but I can assure you that ambiguity does not sit well with men who are accustomed to being in charge. This kind of filming is the opposite of what goes on aboard their boats, and they had lots of questions about how the day would unfold. Unfortunately, I had no answers for them. (Unlike Captains, I actually prefer confusion and ambiguity – especially in television – and I told them as much. I also suggested that, being in a bar, there were any number of remedies nearby capable of taking the edge off – a completely unnecessary piece of advice, given my audience and setting.)

The only one who appeared completely at ease was Phil. He arrived at the last minute, and did so in style – cruising into the parking lot aboard a brand new motorcycle. He walked into the bar with a big smile, said hello to the gang, and then glanced at me with an amused expression. We then had the following exchange.
Me: Hey Phil, how’s it going?

Phil: Mike, I got nothing to say to you until you ride my bike.

Me: Beg your pardon?

Phil: I said that you and I have nothing to talk about until you ride my bike. Got it?

With that, Phil walked me out to his bike, tossed me his keys, crossed his arms, and waited for me to ride off. And so I did. Really, I didn’t have much of a choice.

That was Phil Harris. He had a unique kind of generosity – the kind that sprung from a genuine enthusiasm for whatever it was he chose to focus on. It could be anything. Sometimes he focused on catching crab. Sometimes he focused on his boys, Josh and Jake. In that particular moment, he was focused on the joy of riding his new motorcycle, and he wanted to share that joy with me. He insisted upon it. That’s an unusual quality I think, and a very good one.

Not long after his embolism, I ran into Phil in Las Vegas. I was giving a speech at The ConAgra Convention, and he was doing a series of appearances for a pulley company that had set up a large booth in the exhibit area. During a break, I wandered over to watch Phil talk to his fans. There were many. They had lined up to wait for an autograph and a handshake from the now famous skipper, and the line was growing at an alarming rate.

I stood behind a nearby display, unobserved, and watched Phil carefully as he interacted with his fans. Some people are better at this sort of thing than others, and Phil was very good indeed. He handled his notoriety in a completely genuine way – as though he’d always had it. He focused on every single person who waited to meet him, and found something original to say at every turn. He answered questions that were way too personal, and stayed well beyond his required time, waiting until the last person in line shook his hand, an older guy who told Phil how pleased he was for the chance to meet a genuine American hero. Phil blushed, signed the guys hat, and thanked him for waiting to say hello.

I have many memories of Phil. I wish I had more. One of my favorites was a night in LA (I think it was LA – it might have been NY. Forgive me, they all blend together now.) Regardless, it was a Discovery-sponsored event that included a bunch of their talent. Most of the Captains were there, along with me, The Mythbusters, Bear Grylls…the usual suspects. Also in attendance was David Zaslav.

David Zaslav is the CEO of Discovery Communications. He is responsible for overseeing a dozen separate channels, and runs the leading provider of non-fiction entertainment on the face of the earth. He has become legendary, not only for what he’s accomplished in business, but also for having an attention span that rivals the life of a fruit fly. It’s true. David calls meetings that are sometimes adjourned a minute after they begin. He is very smart, and not terribly patient with those who can’t keep up. He does not sit still – ever. He is always moving. And he is constantly surrounded by people who are charged with keeping away those who might suck up his valuable time with mindless chatter.

Anyway, I was there the night David Zaslav met Phil Harris. David came hurtling through the room at the speed of sound, shaking hands and spreading sunshine. His retinue followed like the tail of a comet, and he was on his way back out the door when Phil walked in. I can swear that what I’m about to tell you is the honest truth. David and Phil shook hands, and began to chat.

People began to stare. Five minutes later, they were still at it. Phil was mostly listening, but David was talking intensely – and people began to speculate about what a crab boat captain and a media mogul could possibly have in common. Then, to the amazement of those who witnessed it, David and Phil wandered off to a quiet corner away from everyone else. There, they sat, and continued to talk!

This was simply unprecedented. Every few minutes, someone would slide over to extract David from this most unusual confab, but every time David would wave them away. When Phil threatened to light up indoors, David led him outside, where they remained for over an hour. Standing there. Talking. Just the two of them.

Eventually, David and Phil said their goodbyes, and Phil joined me at the bar.

Phil threw back a poorly made duck fart and replied, “That was the president of the whole damn channel.”

I smiled. “Well actually, he’s the CEO of the whole damn network.”

“Is that right?” said Phil. “Well, whatever. He seems like a nice guy. Kind of chatty, but his heart’s in the right place.”

Extraordinary. In the history of time, no one has ever described David Zaslav as “chatty.”

I guess it comes down to this. The world is desperate for authenticity. In business and in real life. In work and play. We crave it I think, because it’s in such short supply. Consequently, when we see it, we’ll wait for it. We’ll watch it on TV. We’ll stand in line for a chance to be near it. Fans, fishermen, CEO’s – we know authenticity when we see it, even if we’re not looking for it. And Phil Harris had it in spades.

I didn’t know Phil well enough to properly eulogize him. However, I knew him enough to like him, and more than enough to miss him. He was the real deal. Flawed, human, decent, kind, and totally authentic.

And one hell of a Captain.