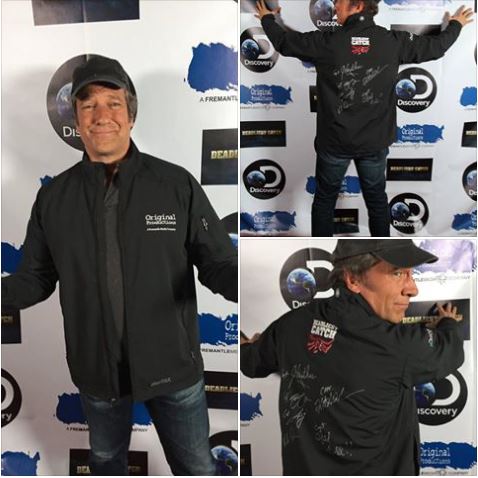 Last night, Season 13 of Deadliest Catch premiered, and the usual suspects gathered and celebrated in the usual way. The Captains made their way to a bar in Hollywood called The Parlor, along with a few hundred of their closest friends. At one point – thankfully, before the open bar was open – we did something on Facebook Live that may or may not have been ill-advised. Regardless, it’s all behind us now.

One thing – the usual frivolity was tempered this year by the loss of the F/V Destination, which many of you know sank in The Bering Sea a few months ago. There’s an effort underway to support the families of those who were lost. Toward that end, I persuaded the Captains to sign my favorite production jacket, in hopes of that someone here will dramatically overbid. It’s a good jacket, freshly laundered, and obviously, the cause could not be better. You can bid here, and see some other items as well. http://bit.ly/2opNI5V

PS. I realize this photo suggests that I’m being arrested. I’m almost sure that didn’t happen…