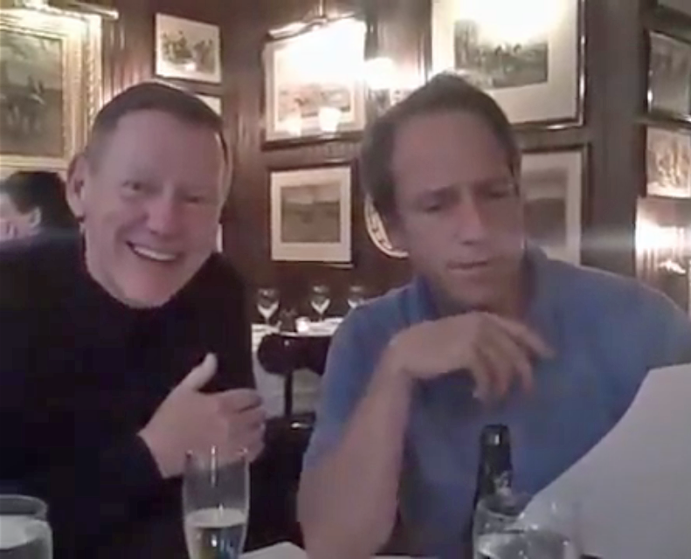 Change For A Ten?

Nice job on Meet the Press! Same shirt, same message. Love the consistency. Quick question – everybody’s talking about Rex Tillerson. Don’t you know him from The Boy Scouts? Think he’d be a good Secretary of State? What about the other guys?

It’s true. Rex and I met back in 2010 when he was President of the Boy Scouts of America. He sat between my parents in the front row as I addressed 100,000 kids at Camp A.P Hill in Virginia. Can’t say we’re pals, but we shook hands and had a nice chat. Funny story, though. My mother insisted on taking a photo of Rex and me, but fumbled badly with her “Fourteen-Dollar-Kodak-Disposable- Instamatic-Camera-From-Walgreens.” She forgot you had to wind it forward after every shot, so Rex and I had some time to get to know each other as, Mom figured out the mechanics.

After standing there for maybe five minutes with our arms around each other, Rex finally said, “Damn son, why don’t you go ahead and splurge? You know – maybe get your mother a camera from the 21st century?”

I bought her one later that week. Which leads me to conclude foreign leaders would probably do whatever Rex tells them to.

As long as I’m dropping names though, I should probably mention that I also know Governor Romney. We met at a “Manufacturing Summit” in Ohio, back in 2012, which – unfortunately for me – turned into a campaign rally. I say “unfortunately,” because the blowback that came from the photos of the Governor and me on stage, was unlike anything I’d ever experienced.

Interesting story, though. When it became clear the “summit” was indeed a “rally,” I pulled the Governor aside and told him that I ran a non-partisan, non-profit foundation, and hosted a TV show popular with democrats and republicans alike. I explained I was in no position to publicly “endorse” him or anyone else. The Governor said he understood, and promised to make sure the press and the audience understood why I was there. Well, he did.

In his opening remarks, Governor Romney made it crystal clear that I wasn’t there to endorse him. The press of course, ignored him, and the pictures inflamed lots of people I didn’t mean to inflame. But the point is – the Governor tried to protect me, and I appreciated that. If he’s the Secretary of State, I’m sure he’ll do what he can to protect the rest of us.

Finally, the third guy on the list is one who I actually know on a personal level, and I’d be remiss if I didn’t write a sentence or two about the most extraordinary boss I ever had.

I worked for Alan Mulally for six years, and remember every moment we shared vividly. There are many stories, but my personal favorite happened in a restaurant in Manhattan. Somewhere between the amuse-bouche and the appetizer, I told Alan about the dozens of people who stopped me every day and asked me to thank the CEO of Ford for “not taking the money.” I also told him that his decision to “go it alone” was probably worth more than all the advertising and marketing in the world. Alan said I was probably right, but looked me square in the face and said, “To be clear Mike, that decision had nothing to do with marketing, and everything to do with the heart and soul of this country, which is our ability to make things.”

Then, Alan did something extraordinary. He reached into his pocket and pulled out a check for $10, along with a letter from a woman named Sally Gibbs. Sally had been so taken with his comments to Congress, she wanted to express her thanks with a financial contribution and a handwritten letter. Alan showed me the letter and the check, and told me he carried both with him at all times, as a reminder of who his boss really was, and what truly mattered most.

We’ve heard a lot lately about the importance of relationships – particularly between successful business leaders and various heads-of-state around the world. Certainly, that’s important – especially for a gig like this one. But if I were looking for someone to help me make America great again, I’d be looking real hard at the guy who already saved a few American Icons. You know – companies like Boeing and Ford.

If that guy like that winds up Secretary of State – a guy who knows the value of $10 – than Sally Gibbs, and everyone else in this country, will have something to celebrate.

PS. If I told you I have dozens of the exact same shirt, would you believe me?