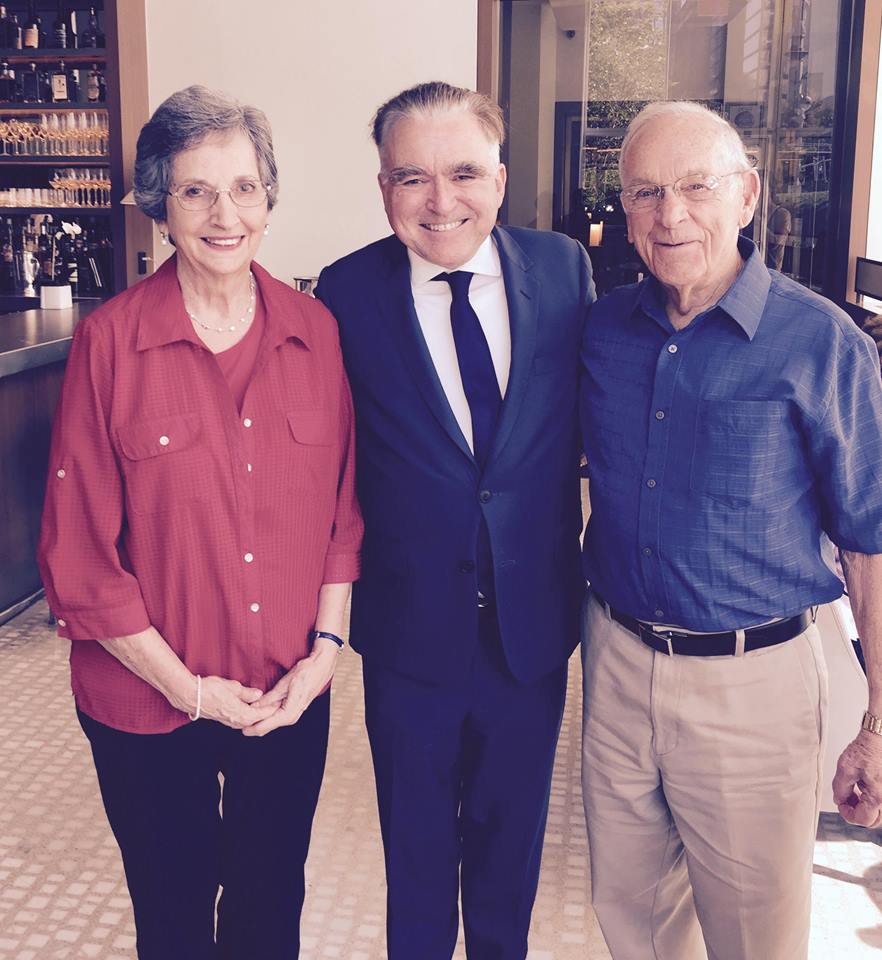 Yesterday morning in their hotel, my mother and father shared an elevator with an unshaven man wearing a baseball cap. As they headed down toward the lobby, my dad, a man who can’t ride an elevator without meeting everyone on it, said, “Pardon me, do you know where can we get a decent breakfast in this town?”

The Unshaven Man then escorted my parents into a well known restaurant that offers Steel-Cut Oatmeal and Eggs Benedict at $24 and $32 respectively. My parents were appalled but famished, and sat down for breakfast. My dad – a man who can’t eat in public without meeting everyone around him – quickly learned that the couple sitting next to them owned a franchise in New Jersey called “The Lawn Doctor.” After grilling the unsuspecting pair for twenty minutes on the vagaries of landscaping, my father returned to his Steel-Cut Oatmeal, and The Unshaven Man returned to the restaurant. He scanned the crowd, saw my parents, and walked over to their table. There, he gave my mother a gift.

“This is for you,” said The Unshaven Man.

“It’s a Zagat Guide to all the restaurants in New York City. I thought it might come in handy.”

“Well thank you very much,” said my mother. “That was awfully thoughtful.”

“You’re welcome,” said The Unshaven Man, who smiled and quickly walked away.

My father examined the book. “Zagat? What kind of name is Zagat?”

“Do you know who that was?” said the woman from New Jersey.

“How would I know?” my father said. “But he was in the elevator earlier and told us we should eat here.”

“Well,” said the woman from New Jersey, “THAT, was Bruce Willis!”

“Bruce Willis?” said my mother. “Are you sure?”

“Positive,” said the woman from New Jersey. “Rumer is staring in a play on Broadway.”

“Bruce Willis is in a play? said my father.”

“No,” said the woman from New Jersey. “Not Bruce Willis. Rumer.”

“Well is he or isn’t he?” said my father. “Seems like a fairly simple rumor to confirm one way or the other.”

“Rumer?” said my father. “That’s her name? What kind of name is Rumer?

“I loved Bruce Willis in The Sixth Sense,” said my mother. “I felt so sorry for him when he realized he had been dead for the whole movie.”

My parents and the couple from New Jersey turned their attention back to Bruce Willis, who had stopped on his way out to chat with some people at another table.

“Oh my Gawd,” said the woman from New Jersey, “Do you know who THAT is?”

“Is it Robert Dinero?” said my father.

“Is it Joe Pesci?” said my mother.

“No,” said the woman from New Jersey. “THAT, is Martin Scorsese!”

“Holy smokes!” said my father. “You can’t swing a dead cat in here without hitting a celebrity!”

My parents watched as Bruce Willis and Martin Scorsese exchanged pleasantries. Bruce Willis said something and everyone at the table laughed. Then Bruce Willis walked away and my mother said, “Shoot John, we should have taken a picture. Michael will never believe Bruce Willis gave us a Zagat Guide!”

“It’s not too late,” said my father. But of course, it was. Bruce Willis, like all bona fide celebrities, knows the perils of standing in one place for too long. By the time my father got his phone out and made it across the restaurant, Bruce Willis was gone. So my father turned back to Martin Scorsese.

“Excuse me, but my wife would love to have a photo with you, if it’s not too much of a bother.”
“No bother at all,” said Martin Scorsese. “I’d be honored.”

Martin Scorsese stood up. My mother joined him. The couple from New Jersey watched. One of the men dining with Martin Scorsese asked if my father would like to be in the photo.
“Sure,” said my dad. “That would be terrific!”

So Martin Scorsese’s friend took my Dad’s phone and snapped a photo. My mother then forwarded the photo to me, along with a text saying that Bruce Willis had taken them to breakfast and Martin Scorsese was an “absolute delight.”

Naturally, I was pleased to learn my parents were making new friends, but I was also getting anxious. They were supposed to meet me at CNN five minutes earlier to help me plug the new season of Somebody’s Gotta’s Do It, (Sunday’s at 10 pm/ET!) So I texted back and told my mother to get a move on. She said they were on their way, and that “Marty” was familiar with my work.

Seconds later, I was reading all of my mothers texts out loud to a producer at CNN. The producer laughed, and asked if me if my parents would want to share their encounter on the air. I said, “Confidence is high.” Then I forwarded him the photo my mother had just sent me.

And so, minutes later, my parents were telling Brooke Baldwin all about about their Excellent New York Breakfast Adventure on live TV. Everyone had a good chuckle. CNN showed the photo as my mother told the story, and I spent the next few minutes feeling deeply honored that Martin Scorsese knew my work. After the segment though, the producer pulled me aside.
“Hey Mike. You sure that’s Martin Scorsese?

“Sure,” I said. “My parents introduced themselves. And look at those eyebrows. Plus, he was talking to Bruce Willis.”

Later though, back at the hotel, I took a closer look at the photo, and reconsidered the producers question.

“Hey Dad, did you say Bruce Willis introduced you to Martin Scorsese?”

‘No. He ran out of the restaurant before I could get him.”

“Well then, Did Martin Scorsese actually introduce himself to you?”

“No. The couple from New Jersey told us it was him though. And they knew Bruce Willis, so I just assumed they knew Martin Scorsese.”

I googled recent photos of Martin Scorsese. I checked out his Instagram account and saw a man with white hair. And a white goatee. And giant glasses.
Hmmm…

After further analysis and some additional side-by-side comparisons, I can now say with confidence that I have no idea who this man is standing between my parents. But I’m pretty sure it’s not Martin Scorsese. Which begs other, more troubling questions. For instance –

If Martin Scorsese wasn’t Martin Scorsese, was Bruce Willis really Bruce Willis? Did my parents really meet the star of The Sixth Sense, or did they just have a random encounter with an anonymous, unshaven Samaritan handing out Zagat Dining Guides? Moreover, was Bruce Willis intentionally misidentified by the couple from New Jersey? And did this same couple deliberately mislead my parents with respect to a fake Martin Scorsese? It’s possible. In fact, it’s exactly the sort of thing I might do, left to my own devices. Thankfully though, there’s another explanation – The Willis Effect.

The Willis Effect is a very real but little known phenomenon that impacts tourists all over the world. Those experiencing The Willis Effect do not see dead people – they see celebrities. It’s a kind of hallucination that typically occurs in the aftermath of a legitimate Bruce Willis sighting, but it can be triggered by anyone famous enough to color the judgement and perceptions of those around them.

Here’s what I think – I think my parents really met Bruce Willis. In fact, I’d bet on it. I’ve confirmed that Rumor is appearing in the play “Chicago,” and according to the rags, Bruce and his whole family are in town to her Broadway debut. Plus, some other guests at the hotel told me directly that Bruce Willis had been seen in the same elevators on that same day. So no – I don’t think the Couple from New Jersey was trying to dupe my folks. Nor do I believe the man in the photo was attempting a deliberate impersonation of one of our greatest living directors. I just think the presence of Bruce Willis made my parents as well as the couple from New Jersey see celebrities who weren’t really there.

Either way, I want to thank Bruce Willis for his kindness. The man went out of his way to procure a Zagat Guide and get it to an elderly couple visiting New York City for the first time in 20 years. Extraordinary. I’d also like to apologize to Martin Scorsese for telling the world he was somebody he’s not. And of course, I’m also sorry that CNN viewers, enchanted by images of The Pope riding around in a Fiat, were interrupted with an image of my parents and a guy who isn’t Martin Scorsese. On a personal note though, I’m glad my folks had a quasi-encounter with at least one bona fide celebrity, and hopeful to learn the identity of The Man Who Isn’t Marty.

If he looks familiar, drop me a line.
Mike

PS. I just got another text from my mom. They’re headed downtown to see the 9/11 Memorial. On the way, they had coffee with Clint Eastwood. Stand by for pictures…