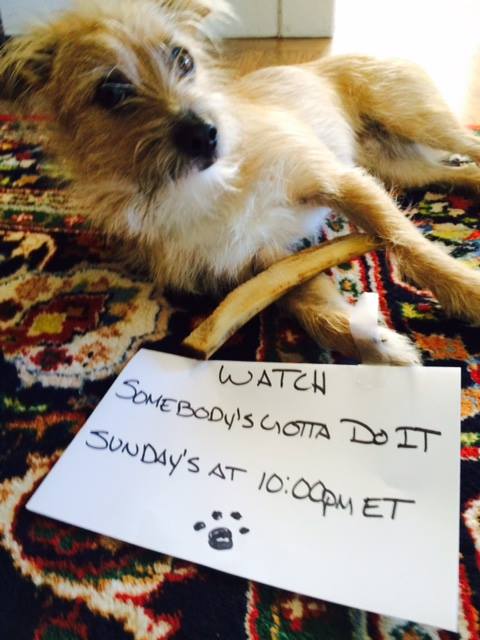 Seems The Biped’s a bit preoccupied here of late, what with the new season of Somebody’s Gotta Do It premiering this Sunday at 10PM/ET on CNN.

In fact, as I peruse this page, I can’t help but notice the wide variety of not-so-subtle attempts he’s made to sear this whole, “Sunday’s at 10PM/ET on CNN” thing into our collective retina.

Not content to simply tell us once and move on, The Biped continues to find ways to beat us over the head with “Sunday at 10PM/ET on CNN.”

He’s even whored out his own parents to drive the message home!

Don’t get me wrong – I know my fortunes are tied to his, so I’m hopeful His Majesty’s efforts at non-traditional PR will persuade you to watch SGDI, this Sunday at 10PM/ET on CNN.

And if you can’t watch, I hope you’ll take a moment to DVR the damn thing and watch it within the next three days.*

But I’ll be damed if I’m gonna sing along with this tiresome refrain, just because His Majesty says, “the future of the series is on the line, along with the certainty of regular meals for yours truly.”

No. No, no, and no again. I refuse to be used like some sort of pawn in The Biped’s quixotic journey to persuade three million virtual friends to watch Somebody’s Gotta Do It this Sunday at 10PM Eastern Time on CNN, right after Parts Unknown.**

My instrument does not play that tune…

*Hell, I don’t even think it matters if you actually watch the damn the show – just record it on your DVR and hit “Play” a day or so later. You can vacuum while it’s on for all I care, or take a nap. Long as you play it back within three days it’s just like you watched it in real time.

**If you DVR the show, it’s important to record the premiere – not the rerun. In other words, Sunday at 10 Eastern Time. That means if you DVR The Biped’s show and you live in California, set you DVR for 7PM/Pacific Time.

But you didn’t hear it from me…