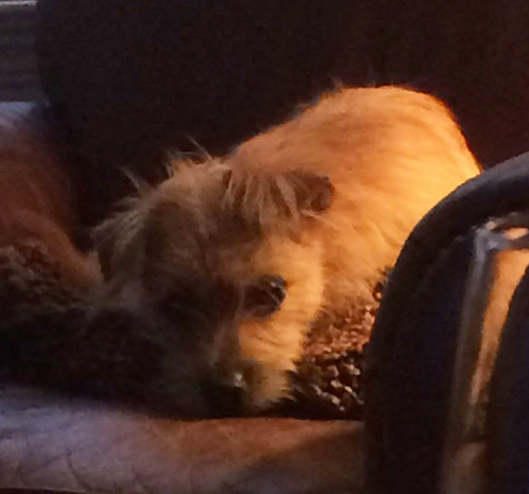 Earlier today, along the route I sometimes wander with The Biped, a 30 foot lamp post fell over and crushed a car idling at a stop light. I was not there to witness the moment of impact, but I’ve just watched the most recent news report, and now I’m sitting here in the Biped’s favorite chair, trying to get my head around the cause of our crumbling infrastructure.
Apparently, the culprit is not rust, or time, or erosion, or vandalism, or faulty construction, or wind, or the relentless tug of Newton’s Second Law. No, the problem is far more insidious. According to city officials, the light pole succumbed to the deleterious effects of dog pee.

I might as well confess now, and save the city any further investigation. I did it. I’ve peed on this very pole more times than I can count, and if I’m the proximate cause of it’s collapse, I’m 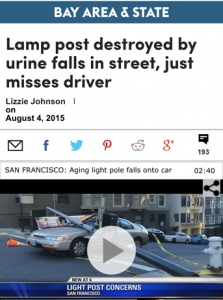 ready to make amends. At the very least, I’d like to publicly apologize to the city, the biped in the Honda, and anyone else who I’ve put at risk with my magically acidic urine. Honestly, I had no idea my pee was so powerful, and I promise to be more careful about where I direct my future discharge.

PS In my defense, I couldn’t help but notice the base of the lamp post was already wrapped in DUCT TAPE! Now, I’m no engineer, but it seems to me that a 30 foot lamp pole that’s alr 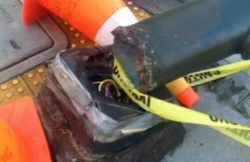 eady wrapped in DUCT TAPE!! might be seen by some as an indicator of damage that pre-existed my deadly whiz. I understand the budgetary constraints plaguing this fair ville, and I hope I don’t sound as though I’m making excuses by downplaying the obvious role of my prior micturitions. But I find it somewhat disquieting that DUCT TAPE!!! is the only thing keeping the street lamps in San Francisco from crashing down upon us all!

PPS. Heads up, San Francisco. I peed last week at the intersection of Fillmore and Pine. In the gutter, right next to the storm drain on the northwest side. I suspect a sinkhole is about to open…