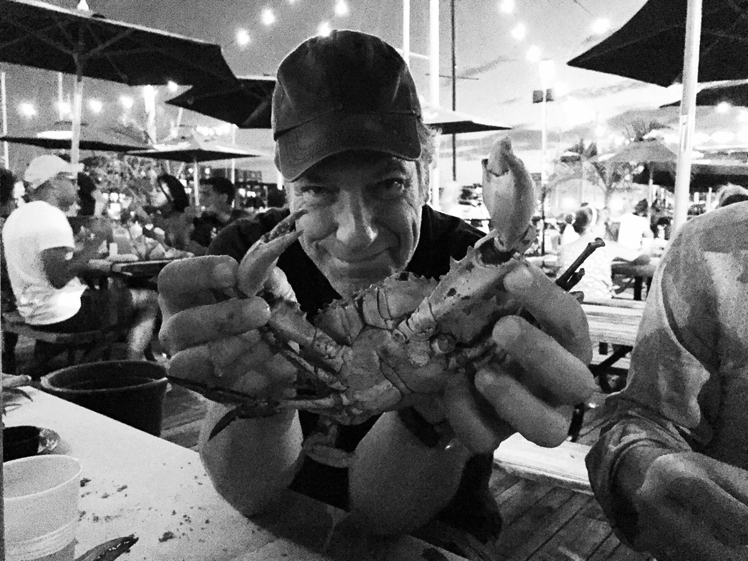 I’m not a food critic, but if I were, I’d suggest you visit Baltimore posthaste and dig into some Maryland Blue Crabs, while they last. We murdered a few dozen the other night at Captain James Landing, and enjoyed, as always, the generous hospitality of Bill the Greek. Today, after several showers and multiple hand washings, I’m pleased to say I can still smell the Old Bay on my fingers. Thanks Bill!

As you may know, Blue Crabs are packed with the sweetest meat of any crustacean, but even in death, they resist being eaten. The most delicious pieces are hidden away in a mysterious apothecary of internal compartments and carefully concealed crevices. “Callinectes Sapidus” is in fact, a nautical Rubic’s Cube, surrounded by a burning hot, razor-sharp shell that can only be breached with an an ice pick and a wooden mallet. Flesh wounds are guaranteed, and the pain is sure to be magnified by the constant sting of Old Bay seasoning, which my father believes builds character in unsuspecting epicureans.

If, on the other hand, you’re partial to crabs that don’t fight back, go to Azumi just down the street and introduce yourself to a platter of Sawagani river crabs from Japan. If I were in charge of the menu, I’d call them “The Daintiest Catch,” but far be it from me to tell Alex The Other Greek how to market this most unusual, most diminutive delicacy. They’re delicious by any name, and 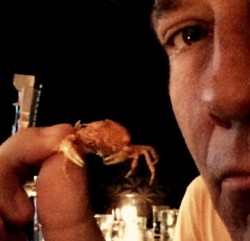 just like the Utz potato chips I grew up with, “if you eat one, you’ll eat ‘em all!” Thanks Alex!

Now it’s a fact, you’d have to eat several hundred of The Daintiest Catch to fill yourself up, so if you’re hungry and in a hurry, don’t screw around – just walk over to Ouzo Bay and crab cake, stat. I’m not about to start a fight over who has the best crab cake in Baltimore, but last night, it would have been hard to beat the ones at Ouzo Bay. In fact, the Ouzo Bay crabcake was so damn delectable I’m hesitant to even show you a picture of one, for fear you’d take an involuntary bite out of your monitor. Instead, I’ll show you the best gimlet I’ve had in recent memory. Gimlets are not the traditional beverage of choice with crab cakes, but last night, dining al fresco on a surprising cool August evening, they complimented my baseball-sized sphere of back-fin with a serendipitous alchemy that simply can’t be planned or anticipated. Which brings me to the matter of my colon, and my next C.R.A.P. 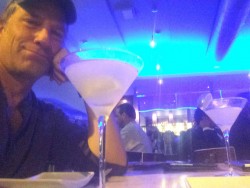 Last summer, at The Mutter Museum in Philadelphia, I saw with my own eyes the largest colon ever removed from a human being – the worlds one and only “Mega-Colon.” You have to see it to believe it, and you can see it here, on this weeks episode of Collectibles, Rare And Precious.

My docent, a lovely woman named Anna, observed my wonder that day, and gifted to me a smaller, plushier version of The Mega Colon to support my neck on the long flight home. Thus, my very own “Mini-Mega-Colon” can now be yours, if the price is right. As always, proceeds benefit the mikeroweWORKS Scholarship Fund. Bid here, at your leisure.

That weird enough for you?