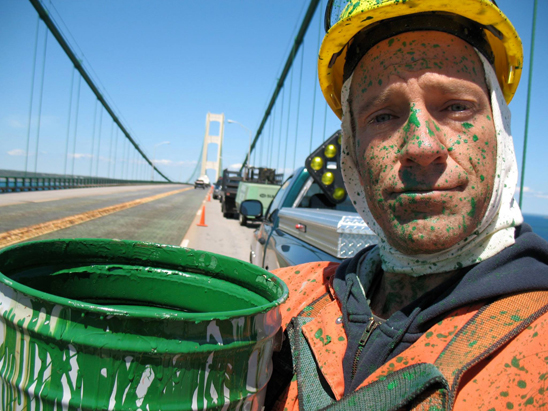 I’m starting the Electrical Technician program at the local Technical Institute in a couple of weeks, and was wondering what options might still be available with the Mike Rowe Works scholarships? I’ve applied for FAFSA, but was denied because my dad made too much money. My parents don’t actually have any money to pay for school though, because of my mom’s medical expenses. (Nor would I ever expect them too. With all the food they’ve fed me over the years they’ve paid for my education 10 times over.)

I graduated high school back in February. I have no debt, and my goal is to stay that way. I have been working since I was 16 doing fast food, odd jobs, and for the past year and a half I’ve been painting houses. I’m a fairly competent painter, and could definitely work under the table which would really help with paying for school. But that brings up a whole slew of issues about it not being legitimate work. I’d also be taking business away from actual contractors, which I don’t think is a good thing to do. I am flustered at trying to figure out how to balance the work thing with 30+ hours a week in the classroom.

What do you think?

Well, I’m not much of a painter, but I think you’re doing a lot of things right. You’ve avoided debt, you’re learning a skill that’s in demand, you appreciate what your parents have done for you, and you’re obviously not afraid of hard work. You’re also concerned about taking work from more experienced, full-time contractors. That shows an amazing level of respect for the men and women who have paid their dues in your industry. But it might show something else as well – something that could hurt you. If you don’t mind me asking, what exactly do you mean by the term “illegitimate” work?

In my view, there are two kinds of work in America – legal and illegal. Obviously, I’m not going to suggest you do anything that’s illegal. But a lot of people these days describe many legal opportunities as “illegitimate,” because they have strong opinions on how, where, and when people should be allowed to earn a living. I know a lot of union workers for instance, who describe any form of non-union labor as “illegitimate.” And I know a lot of other workers who vehemently disagree.

Personally, most tradespeople I know – union or otherwise – were once in your position. They had to figure out a way to get established. Trade unions don’t exactly roll out the red carpet to aspiring members, anymore than big companies design “dream jobs” for those in search of vocational fulfillment. Finding work and creating your own opportunities are skills unto themselves, and every bit as important as the certification you’re currently pursuing. So, if I were you, I wouldn’t stop painting houses for fear of “taking business from actual contractors.” Frankly, the thought would never occur to me, and since it’s a lazy Sunday, I’ll tell you why.

Back in 1984, I was finishing college, and eager to join the union. Back then, The American Federation of Television and Radio Artists was the guild that controlled all the “legitimate” work in my chosen field. I was told by agents, producers, directors, and experienced actors that my future in television depended entirely upon my ability to become a member in good standing with AFTRA.

Unfortunately, joining AFTRA was nearly impossible for a 22 year old kid in Baltimore with no experience and no industry contacts. To get my union card, I needed to first do union work. But I couldn’t get hired onto a union job, unless I had my union card. It was a classic Catch-22. So I looked for non-union jobs, many of which paid me under the table, and were seen by many as illegitimate. In that capacity, I hosted a flurry of bad infomercials, narrated pile of unwatchable documentaries, and attempted some rather dubious modeling work. Not my finest hour, but I made the rent, and slowly got a feel for how the business worked.

One day, I auditioned for a spot in the chorus of The Baltimore Opera, and against some very long odds, I got in. Turns out, the Opera was under the jurisdiction of AGMA, the union that oversaw professional musicians. By joining The American Guild of Musical Artists, I became immediately eligible to join AFTRA, as well as SAG – the Screen Actors Guild. Finally, at 25, I was sanctioned by all the appropriate acronyms, qualified to pursue “legitimate” work, and ready to go after jobs that paid real money.

Of course, I didn’t book any of those jobs, because I was now competing against the most experienced people in the business. Worse – I could no longer pursue the non-union work I’d come to depend on, without running afoul of union restrictions. Consequently, the year before I became eligible to pursue “legitimate” work, I made about $33,000. The next year, when I became legit, I made less than $15,000. And the year after that, I made even less. But here’s where my understanding of work went completely upside down.

After a random encounter with the hiring manager at the The QVC Cable Shopping Channel, I was offered my first full-time job in television. It paid $50,000 a year, with a chance to earn even more in bonuses. The prospect of a steady paycheck was so intoxicating I nearly peed myself. There was just one problem – QVC was not a union signatory. I called AFTRA to explain the situation, and was told in no uncertain terms that I could not accept the job. In fact, I was scolded for even considering “illegitimate work,” and reminded that accepting such work would result in a fine, or my expulsion from AFTRA.

Obviously, I was stunned, though not quite persuaded to beat my head against the wall for another year. So I accepted the “illegitimate” job at QVC, which lead to a long string of other “illegitimate jobs,” which eventually gave me the experience I needed to compete in my industry. In this way, I worked my up to the sewer, and the rest is dirty history.

Point is Tim, work is work, and the right to earn a living is no less fundamental than the right to chew and swallow. Today, I’m back in the good graces of SAG/AFTRA, and to be honest, I’ve benefitted greatly from my association with both. I know firsthand that labor unions have done a lot of good for their members, and I strongly support the right of workers in any private industry to organize in whatever way suits them. But of course, that’s easy for me to say now, because I can afford to pick and choose the kind of jobs that I wish to pursue. Thirty years ago, I was struggling for a way in, and trying hard to make ends meet. Back then, the union did me no favors, and my pursuit of “legitimate” work very nearly kept my career from ever getting started. So, while I appreciate all that unions do for their members, my main concern, and that of my foundation, has always been with those trying to get started. To that end, I reject the idea that all legitimate work is the province of organized labor. And I can tell you Tim – with absolute certainty – that no union, no company, no competitor, and no customer, will ever care more about your future, than you. My advice, for what it’s worth, is this:

Stay the course. Study hard. Paint every house you can, charge as much as you can, and pay your taxes – even on the money you earn “under the table.” Always do your best work, and feel free to apply for our next round of Work Ethic Scholarships. We’re raising money as we speak, and you sound like the kind of person we’d like to help.

PS. Union issues aside, they’re many practical risks of working “under the table” worth acknowledging. Let’s say I offer you a thousand dollars to paint my house, and you agree to do so. Then you fall off a scaffold and break my birdbath. Who pays for that? Or, maybe my birdbath breaks your back? Who pays your medical bills? Or, maybe I decide to not pay you at all, because I’m not happy with your work? Then what?

They’re endless risks to working “under the table,” and lots of people are going to jump onto this thread and identify those risks as good reasons to avoid doing so. But of course, risk is everywhere, and just because you’re in compliance, doesn’t mean you’re out of danger.

Personally, I’m clinging to the hope that we still live in a world where one guy can offer to paint another guys house without a mountain of paperwork that costs more to administer than the job itself is worth.

Of course, I’m not a lawyer, so if you want to be certain, ask one.

(Or two, if you want to be super-certain.)

(Or three, if you want your head to explode…)