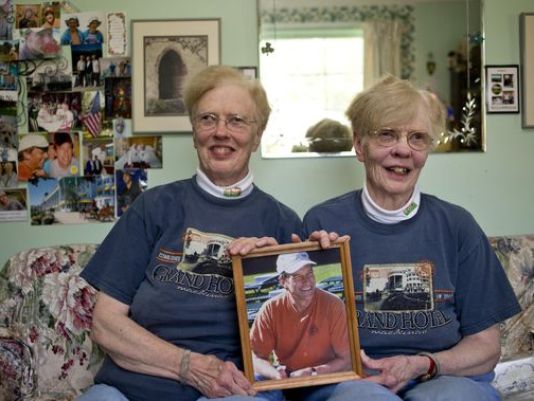 While some might dispute the biggest fans label, you can take it to the bank. They’ve turned their front room into a veritable Mike Rowe shrine with photos and framed and autographed newspaper pages.

“We probably got more pictures of that man sitting around than his parents,” Carolyn said.

“Everybody in St. Clair knows who we are,” Marilyn said.

The Maedel twins are 73. Their fascination with Rowe, who hosted “Dirty Jobs” on the Discovery Channel — and for a while seemed to narrate every other show on the network — has brought them notoriety, not only in their hometown, but across the country.

Carolyn said a neighbor alerted them to the latest posting.

“He makes you laugh so much,” Marilyn said.

The sisters have lived in a house built by their father on Ninth Street in St. Clair since 1949. For most of their lives they’ve followed the same routine — each summer and fall since 1986, for example, they’ve visited Mackinac Island, staying so often at the Grand Hotel that the staff members know their names.

“It’s a little strange,” Carolyn said. “We never expected to be this famous.”

The Mackinac Island connection is how they first met Rowe. Staff tipped them off that he was going to be staying on the island in September 2009.

“We were waiting in the lower lobby,” Carolyn said. “He walked up to us and asked us where the elevator was.”

The TV host was taken with their knowledge of the show — such as knowing he was born March 18, 1962, in Baltimore, Maryland. He filmed a a 5-minute segment with them that closed the Mackinac Island show.

In 2010, Rowe and the twins returned to the island for a segment called “Dirty Conversations” about past episodes. That’s when the photo that launched 32,000 hits happened.

“We thought it was just an inside joke with the crew,” Carolyn said. “We didn’t expect to see it on the computer.” 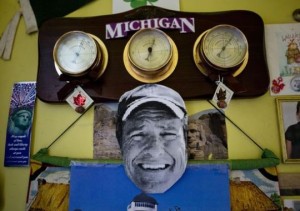 “You can picture it,” Marilyn said.

A video with Rowe and the twins wound up on YouTube under the title, “A Night to Remember.” Here, briefly, is what happened:

Rowe’s producer, Dave Barsky, got hold of the keys to Rowe’s room at the Grand Hotel. He installed the Maedel sisters in Rowe’s bed and gave them a video camera.

When Rowe walked in, after a darts game and several adult beverages at a Mackinac Island establishment, he found the elderly twins in his bed with a video camera, exclaiming in unison, “Hi, Mike, we’ve been waiting for you.”

Carolyn and Marilyn often speak in unison and finish each other’s sentences.

Rowe describes jumping in fright, hitting the wall and sliding to the floor — and slightly wetting himself.

“We had a hoot out of it,” Carolyn said. “We thought it was funnier than heck.”

The video of Rowe’s reaction, however, doesn’t exist. Barsky had turned the camera on — and Carolyn hit the button and turned it off when Rowe turned on the lights.

The sisters said they’ve seen every “Dirty Jobs” episode and can quote most of the dialogue from memory. They also know all the words to the unofficial “Dirty Jobs” theme song — and will sing it at the drop of a hat.

Rowe seems genuinely tickled by the sister’s obsession. He called while filming in Australia in 2012 to wish them a happy 70th birthday

“I know, it’s kind of strange, but we just enjoy it,” Carolyn said.