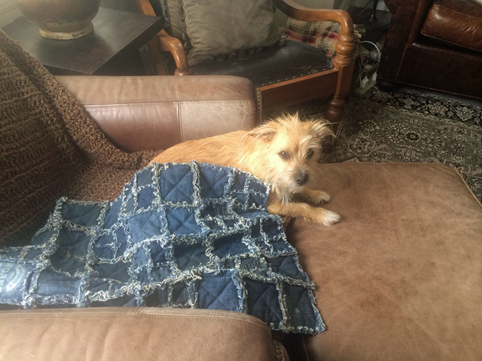 If I understand the upshot of yesterday’s video, (which I had to watch twice,) the biped sent a pile of his old jeans through the US Mail to a woman who magically transformed them into the denim equivalent of The Golden Fleece. And now, people are bidding extravagant sums of money for a chance to wrap themselves in His Majesty’s old and faded pants.

Frankly, I was shocked by the largess, and baffled by the appeal of battered britches. The current bid is already over $5,000, and that, my friends, is a lot of Kibble – even for a good cause. But then, just a few hours ago, The Man in The Brown Shirt delivered to me my very own quilt, slightly smaller, but assembled by the very same necromancer. And now, I have experienced firsthand it’s many hidden delights. And may I just say, this thing is a revelation!
How best to describe the surprising softness of worn denim, or the subtle yet intoxicating smorgasbord of random smells buried deep in 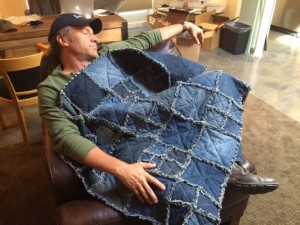 the fabric? The faint tinge of barley and hops, a hint of baby powder, the gentle funk of fertilizer, and the lingering miasma of every major food group, all hovering just below the unmistakable redolence of generic laundry detergent. I’m telling you, lying here in the warm embrace of the bipeds former trousers, it’s almost as though I was actually in his lap – which is precisely where I should be – as he reclines in his favorite leather chair, sipping his Whistle Pig, and reading from his endless pile of pulp fiction. 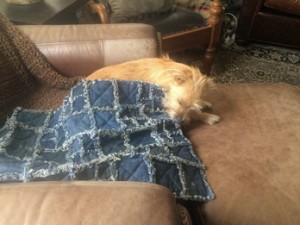 Eventually, I suppose His Eminence will return from whatever important work preoccupies him in the City of Angels, but thanks to this Amazing Technicolor Jeancoat, it’s as though he’s actually here. So, no – I will not be auctioning this one off. Forget it. But the bipeds is apparently still available for an increasingly tidy sum.

Were I blessed with pockets, thumbs, and money, you may rest assured I’d be bidding my paws off.
Freddy