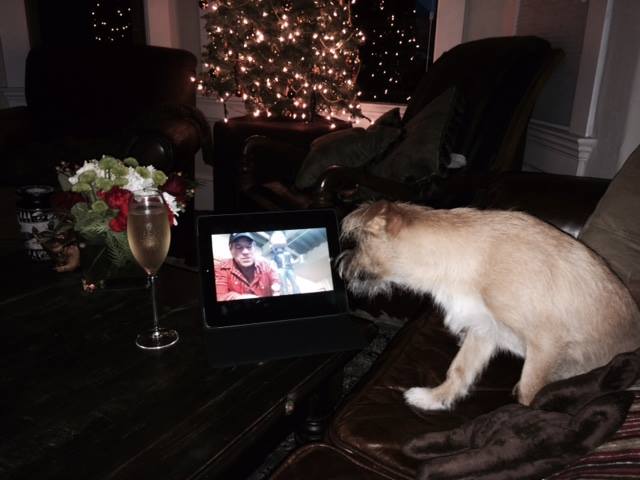 Holy Milkbone! I don’t even believe what I’m looking at. Is that me? Squatting at the feet of my bi-bed? Moreover, am I to believe that someone has bid $5,000 to put me on a mantle? Good Lord, yours is a fascinating species. Let’s chat.

Q – Freddy may be in SF, but he can type. Why doesn’t he post? He’s not in a kennel is he? Jim Willenborg

A – Hello Jim. My master, if you haven’t heard, is what the Boy Scouts used to call “thrifty.” So if these “kennels” of which you speak require some sort of monetary transaction, I can assure you, I’ll never see the inside of one. You are correct however, about my ability to log on, scroll through a few random observations, and comment as the spirit moves me. Although the iPad does vex me.

Q- Too bad those of us who are budget-challenged can’t just BUY a bobble-head, instead of competing with those who are capable of bidding multiple thousands of dollars. Please try to get more and NOT auction them. Jo Skid

A – Greetings Jo. I agree wholeheartedly, and find myself both appalled and elated by the current bid for a shrunken likeness of myself and a bi-bed with no apparent neck muscles. I’ll speak with His Holiness, and see if we can’t bring a little more structure and sanity to future offerings. From what I’m told, the hand-painted versions made entirely in this country will be very limited and absurdly over-priced. The rumor – as I understand it – has hinted at the possibility of a nearly identical, mass-produced variant with an “overseas” component, sometime in the near future. This would apparently make the manufacturing process infinitely less expensive, and allow His Majesty to fix a modest price and satisfy those of us who don’t poop money to participate in a more sensible fashion. Regardless, I’m quite certain my own remuneration will remain profoundly and grotesquely underwhelming. I fear I need an agent.

Q – ok ok ok … i’m down w/the promotion…. and it is the end of the year…tis the season for giving etc….HOWEVER…this is the SECOND week in a row that we’ve been stiffed on “Fridays w/Freddie” … so not only have I NOT seen a SGGDI show in .. like weeks..now… no Freddie too? sigh I must say Mike,,,,I’m disappointed… disenchanted…and basically …dispissedoff! Nancy Rautmann

A – Good Evening Nancy, and thank you. Modesty aside, I must concur. Fridays used to be a place where a civilized and erudite Homo sapien could look forward to a few thoughtful musings from a precocious pooch on the vagaries of life in the big city. Now, alas, my image appears to be used primarily for the purposes of transparent pandering and shameless plugs for whatever “good works” His Majesty is fixated upon. Tiresome, but what’s a dog to do? I’ll return to my regular scheduled observations on the world and everything in it, as soon as I’m permitted.

Q – Does a set of knives come with it?? Laurie Clodfelter Ladik
A – To my knowledge, the bi-ped doesn’t use cutlery. So, probably not.

Q – Lace Pendleton I love you and MRW. Really, I do. But can ya do another contest that doesn’t take money to win? It bein’ Christmas and all?

A – Howdy Lace. I promise to have a serious talk with his Eminence about something a tad more egalitarian. I do know he’s particular about wringing out every last penny for his precious scholarship fund, but I promise, if he ever gets home we’ll have a serious dialogue about the virtues of the democratization of philanthropy. Especially if I’m part of the damned prize.

Q – Sean Tannehill Mike, as a vet… I AM ACTUALLY A BIT DISAPPOINTED. You are pandering to the ladies, and I almost understand… However, since you never served, I understand more. Some of us serve, some of us Jodie up….. I see you as Jodie. I have lost respect for you brother… A vet.

A – Howdy Sean. I can’t speak for the bi-ped, but I have to agree – he does appear to favor the ladies, and his overtures are sometimes shameless in their transparency and desperation. Like you, I sometimes feel neglected by his obvious bias, and frankly, a bit jealous. I’ve learned though, that I have to share the big galoot with the fairer sex. Be strong, brother. It gets easier…

You people flatter me, seriously. Keep it up.