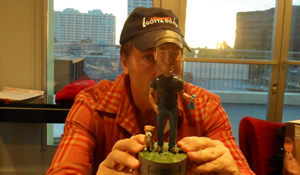 I just got off the phone with my Dad. He asked me what was new, and I told him someone just bought the very first Mike Rowe Bobblehead.

“What’s a Bobblehead?” he asked.

“It’s a little statue,” I explained, “with an oversized head that bobs and wiggles around on a spring. They’re collectible.”

“Pretty much,” I said. “Although mine talks when you press a button.”

“Really? What’s it say?” My father is suspicious of talking objects.

“Different things,” I said. “You know, stuff I’ve said over the years on TV.” I could hear him trying to make sense of the concept. A talking doll with a giant head on a spring that resembled his firstborn and bobbled up and down.

“How much do you sell them for?” This was the question I was waiting for.

“The good ones are made out of a resin polymer blend, right here in the USA. They’re miniature works of Pop Art.”

“I don’t care if they’re made on the Moon by Picasso! Who the hell pays eight grand for your giant head??”

“The bidder chose to remain anonymous,” I said.

“Well I guess so,” he said. “Word gets around you pay that kind of money for a talking Hummel and people will start to look at you funny.” At this point my mother chimed in. I had no idea she was on the other line because they don’t say hello anymore. They just start talking.

“It’s for his foundation, John. He’s selling his Bobblinghead to raise money for more scholarships.”

“It’s tax-deductible, John. It’s a fun way to give people a chance to help a nice cause. His fans appreciate it.” Three thousand miles away, I could hear my father frowning.

“Well then, he should at least put his dog on there,” he said. “People like that dog more than they like him.”

“He did, John. Freddy is sitting next to him and Michael is holding a bag of his poop. It’s adorable!”

“No John, he’s selling a Bobblinghead. He’s just holding the bag of poop. Maybe I’ll get you one for Christmas?”

“How much will that cost us? Good grief, wouldn’t it be cheaper just to fly him back in person for an actual visit?”

Realizing I was no longer an integral part of the conversation, I quietly hung up and let my parents discuss the matter without me. I then began to type this post, in an attempt to properly thank Ms. Anonymous for overbidding in such dramatic fashion, and bring the rest of you up to speed on my Bobble Head Strategy for 2015. So, here ‘tis.

Warren Royal, proprietor of Royal Bobbleheads, has begun the process of manufacturing a very limited run of the Mike Rowe Talking Bobblehead. In total, there will only be 100. That’s it. Each one is handmade, hand-painted, individually numbered, signed by yours truly, and manufactured entirely in the USA. Like me, they’re limited, and when they’re gone, they’ll be gone for good. The plan is to auction them off one at a time in the coming year, and raise as much money as possible for our Work Ethic Scholarship Program. But wait…there’s more.

We just received the first ten, (minus the one Ms. Anonymous just purchased,) and I have a proposal. Taxes being what they are, I imagine that some of you who bid so generously on last weeks initial offering might have been doing so with an eye toward a year-end deduction. If that’s the case, we wanted to make sure you still had the option of overpaying (in a dramatic fashion) before the end of the current tax year. Of course, I don’t want to take away from the specialness of Ms. Anonymous getting 1/100, so we contacted her yesterday to see if she’d have any objection to offering a few Bobbleheads for a significantly lower price than she just paid. She was very, very gracious, and said, “Of course not. It’s good for the foundation. Get as much as you can.”

So – here’s the deal. Each of the nine Bobbleheads are available from now through December 31st, for the outrageous price of $5,000. (Steady, Dad.) That’s about $3,000 less than Ms. Anonymous paid for the first one, and considerably more than they cost to make. I have no idea if any will sell, but several people were bidding beyond that mark last week, and several other were close. So, we’ll see. If not, we’ll auction them off next year.

Anyway, that’s the plan. Obviously, not in time for Christmas, but just in time to get Uncle Sam to pick up half the tab. Look for the next Bobblehead auction in few weeks. And if you simply can’t wait, you can get one right now for the low, low price of a decent used car.

Either way, thanks to you all, and Merry Christmas.

PS. In all the Bobble frenzy, I nearly forgot to thank Jennifer N. for purchasing my one-of-a-kind Reindeer Christmas Sweatshirt from Palmer Alaska. At $900, Jennifer also overbid in a most dramatic and generous fashion. And Barsky, true to his word, signed it along with me. (Whether that increased or decreased the value is anyone’s guess.) Thanks so much, Jennifer. Wear it well! (But wash it first.)

PPS. I know that many of you are disappointed that I can’t offer a high-quality, USA Bobblehead for a reasonable price. Believe me, I tried. Unfortunately, the mass-market bobblehead business, (yes, there really is such a thing,) is now entirely offshore. We’re still exploring more affordable alternatives, and I’m optimistic we’ll have something much more reasonable in a few months. But for now, this is where we are. Thanks for understanding.

PPPS. Ms. Anonymous – I really am blown away by your grace and generosity. I’ve asked my office for your number to thank you personally. If you see an unknown number pop up later today, it’s probably me. If you don’t pick up, I’ll just sing the Grinch and be on my way….