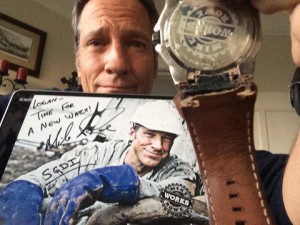 Last week, I gave my watch to Chris Cuomo, who appeared to be coveting it during our interview on New Day. He then offered it for sale on-line, and promised to give the proceeds to the mikeroweWORKS Foundation. Well, one thing lead to another, and eventually, my $35 mikeroweWORKS watch was purchased for $4,050.00.

That’s four-thousand and fifty US dollars.

This kind of generosity never ceases to amaze me, and I just wanted to personally thank everyone else who overbid in such a dramatic fashion, especially Tracy Everett, who coughed up the gelt in question. When my office asked Tracy if I could publicly acknowledge her kindness, she wrote this:

“I would be honored if Mike mentioned both me and my son Logan on Facebook. Logan is 9 years old and has been a huge fan of Mike’s since he was 5. You can let Mike know that his watch will be treasured for many years to come. Bidding for this watch was such an easy decision for me for two reasons. It’s going to make a little boy who has been through a lot of major loss in the past 2 years very happy and the money is going to a great charity.

Thank you so much for this opportunity.”

Tracy – you got class. And since you paid nearly $4,000 more than the watch originally cost, I’m going to include another precious timepiece along with the one you actually purchased. As you can see, this one is truly beat to hell. The band is on the verge of disintegrating, and I suspect the time is only accurate twice a day. Plus, it smells funny. (I believe it was last worn in a septic tank.) Anyway, it’s on it’s way to your arm, or Logan’s, along with my sincere appreciation. Thanks again for your generosity, and for supporting mikeroweWORKS.

PS All my C.R.A.P. (Collectibles Rare And Precious,) is sold to benefit the mikeroweWORKS Foundation, and are most often used for Work Ethic Scholarships. Look for more C.R.A.P., just around the corner.

PPS I loved last nights show, and hoped you did too. Unfortunately, we got preempted at 9pm on the West Coast by the shooting in Canada, ISIS, Ebola, etc. The plan is to re-air the episode Saturday at 9pm. Assuming of course, we’re not in the midst of Armageddon or The Rapture.

One thought on “mikeroweWORKS Watch Purchased for $4,050!”