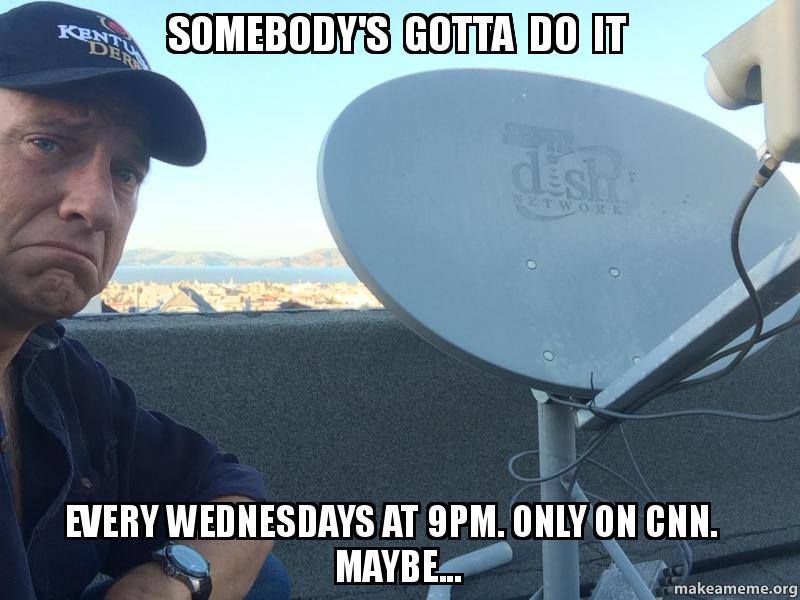 Brandy Bell Maxwell
Hi Mike. I guess I’m a little slow on the take with the CNN/Dish issue. It hit my husband and I when we sat down tonight and realized your show wasn’t recorded that we no longer have CNN And let me tell you, I’m PISSED!!!

Romy Shinn Piccolella
Mike, I’m so upset that I missed last week’s show. Maybe you should call Ted Turner and have a little chat with him?

Bryan Garra
Mike, Dish Network has removed CNN from our lineup and I’m damn mad!! I love your show…what can I do…more importantly what can YOU do?? They will listen to you!! HELP!!

Melanie Doughty
Mike, we absolutely LOVE your new show, Somebody’s gotta do it. The big problem that we currently have is that we can NO LONGER SEE IT because DISH has dropped CNN from its line up!!!

Matthew Jackson
Hey Mike, big fan here. I’m UPSET that the dish network no longer carries your new show. Maybe you can have the powers to be give the CEO of dish a call. Just seems like all the stations that have popular shows get dropped and to make matters worse they don’t drop the price!!! Let me know what you can get done.

Michael S. Harrison
Well Mike, I can’t watch your show, BECAUSE THE DISH NETWORK TOOK IT OFF… BUT MY BILL FROM DISH REMAINS THE SAME… I WANT CNN BACK….YES I’M YELLING!!!!

Being a savvy observer of the human condition, and a keen monitor of the emotional ebb and flow on my own Facebook page, I have detected a subtle but growing disenchantment with DISH’s decision to drop CNN from it’s current programming lineup. Along with the comments posted above, I’ve received no less than 500 similar remarks over the last week, most of which contain a preponderance of capital letters and exclamation points. People are angry. They want answers, and they want to know who to blame. I just ran into a viewer at the airport who described her feelings as “highly dishsatisfied.”

What this means for the overall level disappointment among the entire universe of DISH customers is difficult to say, but based on my experience as an imaginary statistician, I can assure you the number is biggish. As for the assignment of blame, it appears that most of the acrimony is leveled at DISH, though CNN is not getting out unscathed. Many are blaming Ted Turner specifically, and seem to believe he’s on a sailboat somewhere, waiting for my call and sage advice. Others have blamed President Obama, Glenn Beck, Bill Maher, my dog, and of course, the Freemasons.

Obviously, the drama between DISH and Turner is beyond my pay grade, but let me just say that I share your frustration. Somebody’s Gotta Do It is a really good show, and I want you to see it. Not just for me, but for guys like Mutt Merritt and Don Doughtry, who were featured in last weeks episode. Mutt’s dedicated his life to saving the oyster population in The Chesapeake Bay, and Don runs the best damn Marching Band in the country. These are people worth meeting, and right now, I simply can’t make the introduction. The best I can do is cobble together some behind the scenes footage from earlier episodes. You guys deserve to see something, even it’s just me trying to figure out how to make a TV show. If you like it, I’ll put together more.

In the meantime, please know that I’ve offered to broker a number of potential resolutions, including a protracted game of “Eenie Meenie Miney Mo,” “Capture The Flag,” and of course, a binding match of no-holds-bared Rochambo. I’ll let you know what happens. As for tomorrows show, I think it’s excellent. I learn how to survive in the Mohave, and visit a town in Texas that depends entirely on Watermelons. Fires will be lit, seeds will be spit, and melons will be thumped, all of which you’ll see in vivid high-definition. Unless of course, you have DISH.

If that’s the case, please resist the urge to smash the dish into tiny pieces, or defile it in any way. Vandalism is common among the Highly Dishsatisfied, but almost never the answer. Instead, why not make a print the attached photo, and send it along to DISH with your next payment? Better yet, print it on the back of your DISH bill. (Just because you’re dishgruntled, doesn’t mean you should waste paper.)