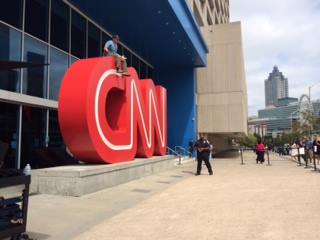 Hi Jack – As questions go, this one is right up there with “What was your dirtiest job?” It’s a fair question though, and my honest answer was posted right here when the show was first announced several months ago. Please give it a read – it still holds up.

Here’s an abridged version, courtesy of the same question asked in a variety of different ways from my friends on the wall.

John Kerley. “I think CNN is an EVIL network.”

Hi John. In my experience, Good and Evil do not inform the decisions of network executives. Ratings do. But look – if you really believe that CNN is EVIL, I would advise you to get all the television sets out of your house immediately, lest someone accidentally turn on Wolf Blitzer and open the gates of hell.

Perish the thought, Frances! I have no desire to report the news. I’m at CNN for one reason and one reason only – they have given me an hour in primetime to prove that real people can still be interesting, and non-fiction can still be fun. Like Dirty Jobs, SGDI will be completely unscripted, totally transparent, and utterly apolitical. It’s not as filthy as my last gig, but it’s every bit as fun, and 100% make-up and tele-prompter free.

Lee Little. “Love ya Mike, but I am sad that your show is on CNN.”

Hi Lee. Don’t be sad. CNN is a brand, and brands are always evolving. Today, Arts and Entertainment has made room for Duck Dynasty. History has made room for Pawn Stars. Discovery has made room for The Amish Mafia. And Animal Planet has made room for Dirty Jobs – even when the jobs have nothing to do with animals or the planet. Right now, CNN is ordering an entire slate of programs that are completely unscripted. That’s a big departure for a network that’s known for covering nothing but news 24 hour a day, and in my view, a really positive step in a very sensible direction.

Mary White. “Do you think people who hate CNN will watch your show anyway?”

Hi Mary. I sure hope so. Most people I know don’t watch TV because they love networks – they watch because they love shows. If Breaking Bad was on Disney, I’d have watched it there. If Game of Thrones was on Oprah, that’s where I’d go to watch it. If Justified was on Lifetime, I guess I’d be watching “television for women.” I’m hoping that open-minded people will watch Somebody’s Gotta Do It for the simple reason that it’s a good show. As for the close-minded, I’m hoping they’ll watch by accident.

Judy Ens-Gittemeier. “It’s a shame your show is on CNN. Nobody watches that channel.”

Hi Judy. I suspect CNN would like a bigger audience. I suspect HBO would too. And Discovery. And History. And Nat Geo. And every other network on the planet. Today, everyone seems to be reevaluating their brand in the hope of getting a bigger audience, and CNN is no different. But because their foundation is news, CNN is uniquely positioned to start producing the kind of shows I like to watch and make. Truth is, news has more in common with real non-fiction than most of the “reality” currently in vogue at traditional non-fiction networks. That’s why CNN is getting into unscripted programming. For a guy like me, that’s hard to ignore.

Hi Jason. No need to apologize. I get that personal politics might influence an individual’s choice of news networks. But what if CNN started to produce a few shows that were not political? Shows that you actually liked? Wouldn’t you encourage that kind of change? Somebody’s Gotta Do has nothing to do with news or politics. Neither do many of the other shows currently in production at CNN. That marks a significant change for a network that has traditionally focused on nothing but news gathering. Doesn’t it make sense that those who hate CNN the most, would view any change in their programming direction as a positive thing? Don’t you want to encourage that?

Charles Behm. “If you could get on Fox, your ratings would be astronomical. Many true Americans are fed up with CNN’s left wing bull, biased reporting.”

Hi Charles. You might be right. Somebody’s Gotta Do It on Fox would probably get a bigger rating. But I’m not sure it would reach more people. CNN touches a lot of venues that aren’t counted, like offices and airports. Regardless, I don’t think that people who prefer CNN are less American than those who prefer Fox. In fact, I’m more sympathetic with Americans who have given up on cable news altogether. The urgency of the production model, the constant “teasing,” the endless promotion, along with editorializing and finger-pointing have helped pit the country against itself. The 24 hour news cycle has not made us more informed – it’s made us more anxious and more divided. Somebody’s Gotta Do It on the other hand, is guaranteed to calm and soothe even the most savage partisan.

Hi Bill. I think you might overestimate my power in the entertainment industry. Fox has a plan and a strategy that seems to be working for them, and that plan does not include a broad commitment to non-news, non-fiction programming. The truth is, most networks are simply not interested in producing truly unscripted content. That’s why CNN’s decision to move in this direction is important. Remember – all cable news networks are facing the same programming challenge. Every year, they need to fill 8,760 hours with some form of non-fiction. Does it really have to be all news all the time?

I can’t speak to CNN’s politics, or Fox’s. More to the point, I’m not really interested. I can only tell you that right now, I feel lucky to have a partner that’s willing to take a chance, and I’m happy to assure you that once a week – for exactly one hour – there will be no bad news on CNN.