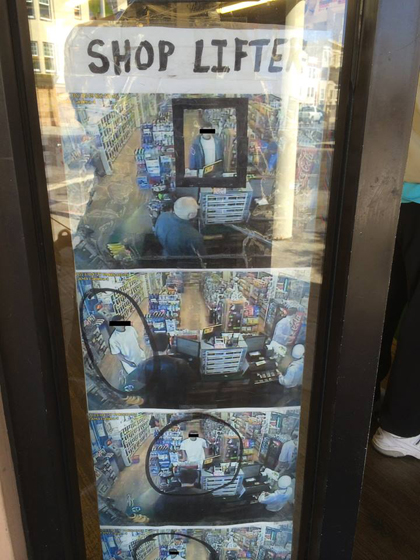 Had a spirited conversation last night with some locals down at the liquor store. The subject was shoplifting, and the topic arose because of this photo. As you can see, it was taken from a security camera, and features a guy in a white tee-shirt. The headline identifies the individual as a shoplifter. The photo is posted in the front window for all to see.

“Good for you,” I said to the owner. “I wish every store in the country did this.”

The guy in line behind me held a different view. ”Really? How would you feel if you were in that photo?”

“Well, I guess I’d feel like a shoplifter who got publicly shamed,” I said.

“Yeah, but what if you didn’t do it? How would that make you feel?”

“If I were falsely accused I would feel angry. But why would the owner put my face in his window and identify me as a shoplifter if he didn’t have proof that I was in fact a shoplifter?”

I looked at the manager and said, “Frank, have you ever made a mistake or falsely accused someone of shoplifting from your store?”

“Of course not,” said Frank. “I have the proof on the video. I put up a new photo every week. I have hundreds of these scumballs on tape.”

“Really? So has this strategy helped cut down on theft?”

“Big time,” said Frank. I used to get ripped off every day. Now it’s more like once a week.”

Then a third guy chimed in. He identified himself as a lawyer, and said that even if Frank had proof of the crime, the guy in the photo could sue him and very likely win. I was incredulous.

“On what grounds?” Telling the truth in a storefront window?”

The lawyer shrugged. “I could argue that the man in that photo – were he my client – suffered irreparable harm to his reputation and public standing. I’d argue that Frank here was the proximate cause of that damage. Moreover, the level of potential harm caused by this photo goes far beyond the punishment typically handed down for this kind of petty crime.”

“Are you that good a lawyer,” I asked? Or does our country really have it’s head that far up it’s own ass?”

For the next ten minutes, we discussed the law, public shaming, petty theft, and the rights of the accused. I expressed my belief that stocks should be brought back to the public square. Frank concurred. The first guy in line called me a “modern day Torquemada,” which I took as a compliment. The lawyer was in favor of stocks, but only because they’d be good for business. The whole thing made me very thirsty for the Whistle Pig, waiting patiently in my brown paper bag.

Finally I asked, “What would happen if I posted this photo on my Facebook page? Could the shoplifter then sue me?”

“Sure,” said the lawyer. “Anybody can sue anybody for anything.”

“Yeah, but would you take the case?”

The lawyer looked at me with something I’ll call recognition. “If I thought there were a decent chance at a recovery, sure.”

“So if I post this image on my Facebook page, and the guy in the photo comes to you and says I’ve ruined his reputation by telling the world he’s guilty of shoplifting, you’d sue me? Even if the guy is proven guilty on tape?”

“Suing celebrities is fun,” said the lawyer. They usually settle, just to avoid the headache. But just to be clear – I’d sue Frank here as well.”

After careful consideration and deliberation with Frank, I’ve decided to post the photo in his front window. But upon the advice of my own attorney, I’ve concealed the identity of the no-good shoplifting scumbag in the white tee-shirt and jeans. I realize this defeats the purpose, but that’s what things have come to in my world.

PS. The guy in the photo looks a lot like Tom Cruise, circa Top Gun. (Probably not him though.)

OFF THE WALL: Shopkeepers, Shoplifters, Shysters, & The Death of Shame