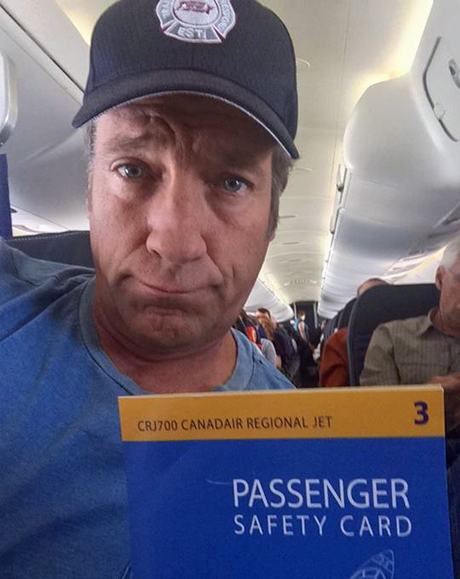 The woman standing at the back of the plane is about to piss her pants. I know this because five minutes ago she crawled over me and said, “I’m sorry to disturb you Mr. Rowe, but I’m about to piss my pants.” Sadly, the kid across the aisle beat her to it. No doubt about it. The whole plane smells of urine, and it’s not coming from the bathroom. It’s coming from the kid.

We’re on a CRJ700 – a Canadair Regional Jet flying from San Francisco to Kansas City. It’s a three hour flight, but it feels a lot longer. Why? Because the CRJ700 was designed by The Marquis de Sade. There’s only one bathroom on board, and it’s all the way in the back. One bathroom for 74 people. On a three-hour flight that was delayed on the tarmac for 35 minutes.

Seasoned travelers will immediately understand the implications, and behave accordingly. But most of my fellow passengers do not possess the institutional knowledge required to endure three and a half hours on a CRJ700. At the airport, they drink their breakfast beverages like it was any other day, enjoying their lattes and orange juice with impunity. Then they blithely board this long and skinny Tube of Despair with no sense of how a solitary toilet can conspire with a bad floor plan to humble the strongest among us. Once settled, many avail themselves of the beverage service, cruelly offered by a smiling flight attendant who must have surely known what would follow. Poor bastards.

It began with lots of anxious head-turning – the way it always does when people realize they’re on a plane with only one crapper located far behind them. People needing relief look worriedly toward the back of the plane to see if the restroom is occupied. Invariably, it is. So they stay seated, but they keep looking back every five seconds. The effect is interesting. As more heads turn, more people realize their own need is identical to the need of those around them – and getting worse. So a line forms in the aisle. Not good.

Soon, people realize the inevitable – we’re all going to need to urinate before landing – but not necessarily at the precise moment of our own choosing. Thus, the fundamental certainty upon which all continence depends is suddenly compromised, and a series of unusual but pressing questions begin to form in the mind every traveler.

When exactly, does one get up and join the line? Does one wait until one needs to go, or does one wait in a line of ever-changing length? What is the proper protocol? Are those seated closer to the restroom obligated to remain seated if they see someone getting up in front of them? Do women and children deserve some kind of deference? If so, how much?

These questions are important, because standing in line to pee on the CRJ700 is a journey in personal humiliation. The aisles are so narrow it’s impossible to remain upright without invading the personal space of those still seated. (If you zoom in to my seat-mate, now standing in the back, you’ll see that her ass now occupies the space reserved for the face of th 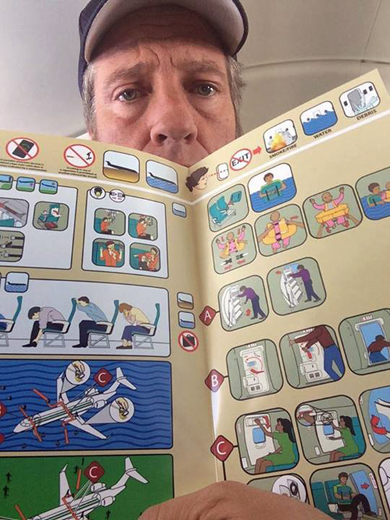 e man still in 17C. That guy, or whatever’s left of him, is now crammed into the lap of the stranger next to him, who is no doubt trying to jam himself through the window, happy to pay the ultimate price for a little fresh air.) Point is, waiting in line to pee on a CRJ700 is actually worse than pissing your pants, as evidenced by the peaceful countenance of the soggy kid, sleeping across the aisle.

Anyway, the situation really devolved an hour ago, when the line grew to fifteen people. Everyone who hadn’t yet peed was fumbling through a personal calculus involving time, space, bladder capacity, prior liquid intake, arrival time, and basic self-control. Those in line were the most desperate, and no doubt counting the minutes to relief. Alas, they forgot to factor in the big unknown – turbulence. As we flew through some very heavy chop, the Captain demanded everyone take their seats. Desperate people who had been waiting in line – some for a half hour – had no choice but to follow orders. Mutiny was out of the question, as the chop would have made hitting the toilet – even from a seated position – all but impossible.

The agony in the plane was palpable, and when the safety belt sign was finally turned off twenty minutes later, it was like a scene from Pamplona. The stampede toward the stern was immediate and chaotic. Good manners and decorum were forgotten, as once civilized people scratched and clawed their way over the young and helpless, fighting backwards for a few private moments in a defiled outhouse 37,000 feet in the sky.

I have pictures, but out of respect, I’m not going to show you. After yesterday’s post, I’m worried about sharing as much as I already have. I will however, show you the inside of the briefing card, which the flight attendant strongly advised we refer to during the mandatory safety briefing of the CRJ700. In it, you’ll see all sorts of helpful illustrations regarding what to do in the event of an emergency.

Alas – there are no helpful tips for how to politely pee all over yourself and your neighbor.