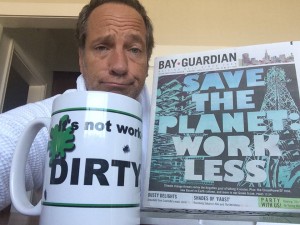 It now appears we have a new culprit that explains the cause of global warming – hard work.
Early this morning, one of San Francisco’s free newspapers found it’s way to the sidewalk in front of my apartment, proving yet again that you don’t always get what you pay for. Because I abhor litter, I picked it up for deposit it in my mandatory recycling container. But not before glancing at the headline.

Apparently, this is their annual Green Issue, and their contention is pretty straightforward – work is killing the planet. Below the headline it gets better – “Climate Change Threats Revive the Long Forgotten Goal of Taking it Easier.”

Against my better judgment I took a peek inside, where a lengthy article spelled out a variety of examples about how the American work ethic is making the world hotter. Let me sum it for you. Hard work requires energy. Energy, as you surely know, is dirty, expensive, and bad. So, if we use less of it, we’ll not only save money, we’ll have more free time to follow our passion, and best of all, a more temperate planet for everyone. Ergo – work less and save the world!

We did two specials on Dirty Jobs called “Brown Before Green.” I don’t have anything new to add. However – if you run a foundation that’s based on the belief that “Work is Not the Enemy,” you can’t ignore a headline like this one.

I launched mikeroweWORKS on Labor Day of 2008. I did it because hard work and skilled labor need a PR Campaign. Too many Americans have become disconnected from the people who make our society function, and I believe that “disconnect” has informed a great many challenges we currently face as a country – including a widening skills gap, a crumbling infrastructure, and decades of offshoring. In short, I think we have a rotten relationship with work, and I suspect a lot of our current problems are a symptom of that relationship.

Occasionally, people say “Mike, what makes you believe such a thing? What makes you think that society is waging a war against hard work?” I have a book full of examples. And if I had seen this headline before I wrote it, I would have included one more…

One thought on “War on Hard Work Continues”