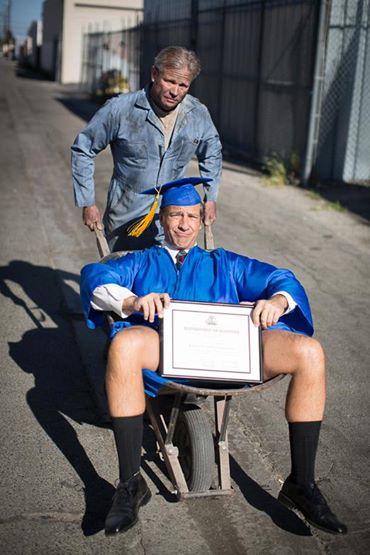 Today’s comment off the wall comes from David Brugh.

“Mike – what’s your take on the Feds calling technical schools “for-profit” and claiming these schools are predatory? I think – and my teenagers, for whom your mikeroweworks campaign has really resonated – think this is bullcrap.”

Hi David – I think your kids have summed it up nicely! Many technical schools are in fact, “for profit.” But comparing a for-profit trade school to a for-profit, on-line university is a bit like confusing Robinson Caruso with Gilligan. True, they were both castaways, living on an island. But beyond that…

At issue, is the latest iteration of something called The Gainful Employment Regulation. It’s getting lots of press because it paints for-profit schools with a very negative, very broad brush. Last weeks article in USA Today is a great example.

As the headline states, the Feds are targeting for-profit schools, in a way that implies that the problem is profit. The school in the photo – Universal Technical Institute – is in fact, profitable. But they are also one of the most respected trade schools in the country, and responsible for training thousands of diesel technicians. But now, UTI and lots of other legitimate trade schools are getting lumped into what sounds like a nefarious bunch of opportunists, feeding at the bottomless trough of federal money. That is patently unfair.

[UPDATE – USA Today just replaced the image of UTI with a picture of the President. Interesting.]

This “link” between a schools profitability and the number of graduates who default on their loans suggests a correlation that doesn’t really exist. For one thing, an overwhelming majority of students at for-profit schools start off in much worse financial shape than students attending a private university. So the numbers are skewed going in. Plus, non-profit universities are just as capable of leaving graduates in profound debt with no prospects in their chosen field. As the article points out, “If the same regulation was applied to ALL of higher education, a bachelor’s degree in journalism from Northwestern University, a law degree from George Washington University Law School, and a bachelor’s degree in social work from Virginia Commonwealth would all be penalized.” And regarding profit, I’ve never met a professor at a “non-profit” university who works for free. (Tenure, anyone?)

Full disclosure – mikeroweWORKS offers scholarships to several technical schools, including Mid-West Technical, Tulsa Welding, The Refrigeration School, and UTI. I’m biased. But I also think student debt is a massive problem, and I’d love to see it shrink in a big way. Graduates now owe north of a trillion dollars, and that’s affecting the whole economy. And for what it’s worth, part of Congress actually agrees with me! (A few of them, anyway.) Check out this press release that followed last weeks article.

As for “predatory” behavior, I’m afraid that’s probably a fair criticism. The current admission process pretty much guarantees it. Thousands of salespeople, millions of potential students, and hundreds of billions of dollars in federal loans all occupy the same basic space. The students want the money. The schools want the students. And the salespeople want a commission. Of course it’s aggressive. And it all revolves around our tax money and something called accreditation.

In order to accept federal money from an enrolled student, a school must become accredited. Doesn’t matter if they’re a for-profit plumbing school or a non-profit business school. Makes sense, right? If we’re going to encourage every kid to apply for a government loan, we ought to make sure the schools are qualified to train them appropriately. But shouldn’t we also make sure the kid really wants to go to college before we hand over the cash? At some point, shouldn’t we qualify the applicant on an individual basis?

It’s hard to look at the universal push for college and not think of the universal push for home ownership. It began the same way – with a growing belief that buying a house was something more than a practical, financial decision. Somewhere along the line, home ownership started to feel like an expectation, and then a “right.” Our leaders began to talk about it at every turn. President Clinton kicked it off in ’94. He said, “More Americans should own their own homes, for reasons that go to the heart of what it means to harbor, to nourish, to expand the American Dream.” A few years later, President Bush doubled down on that same sentiment. “We can put light where there’s darkness, if we work together as a nation to encourage folks to own their own home.”

Eventually, it became politically incorrect to even suggest that someone of modest means might be better off renting. So America’s leaders encouraged people with no collateral and little savings to assume a mortgage. Vast sums of money were spread around with little or no downpayment required. Institutions structured loans that no sane person would agree to, but because the underlying beliefs about owning a home were so powerful, sanity was overlooked. Of course, the whole thing was a house of cards, the taxpayers got stuck with the tab, and we’re still arguing over who’s to blame.

Is the student loan bubble really so different? The cost of a degree has risen 500% since 1984. Twice as fast as healthcare. And our leaders now tell us that a college education is some sort of “right.” Two months ago, the First Lady began promoting the Free Application for Federal Student Aid. With great passion. FAFSA is a portal of sorts. It leads students to nine separate programs for federal money. Mrs. Obama was addressing a room filled with high-schoolers and parents. She said to the students, “Completing this form is the single most important thing you can do for your future.” To the parents, she said, “Don’t leave any money on the table!” Moments later, The President concurred.

Never mind the trillion dollars currently outstanding. Never mind personal politics. Just imagine being a high-schooler in that room, with no interest in college. Your teachers and guidance counsellors have told you over and over that college is your only hope. Your parents are pressuring you to choose a direction. Now, the most powerful couple in the free world tells you that NOTHING is more important to your future than applying for a student loan from the federal government. What would you do?

No doubt, some kids will fill out the form, get the money, go to college, and live a better life because of it. Great! But many others will wind up in serious debt because they took the very same advice. And that’s my beef. We’re still painting with a broad brush. At the very highest levels, we’re still talking about college as if everyone should go. Why? Is a student loan really the best option for a kid with no plan, no desire, and no practical accountability? Especially at a time when the majority of available jobs don’t even require a four-year degree? Why should we push a government loan on to person like that? I’ll grant that everyone’s intentions are good. But intentions are beside the point. Had I started my career with that kind of financial burden, I would have failed. No doubt about it.

I had a friend in college named…let’s call him Shamus, in honor of today. Like most of us in the Class of ’84, Shamus was a bit of a slacker. He lived on campus, partied his brains out, and got lousy grades in his junior year. Then his parents, who had been paying his tuition from day one, decided to cut him off. Just like that. No more money. If he wanted to finish, he would need to get a part-time job and send the paycheck home every week. Only then would his parents agree pay for another semester. Shamus freaked out for a few days. Then he found work at a restaurant and finally got serious about school. He graduated the following year.

Point is, we have loaned a lot of money to a lot of students, many just like Shamus. Unfortunately, we’re not in control of the money, or the student. We are not his parents, and he is not accountable to us. We can’t force him to get a job, or get serious about his future, or do anything he doesn’t feel like doing. But if he defaults, it’s nevertheless on us.

I’m fine tightening the standards, and I’m all for being smarter with federal funds as they apply to ALL accredited schools. But the real problem here is not the profitability or default rates at certain schools. The real problem is the fact that we continue to present college as the only viable alternative. When we sell a one-size-fits-all policy, we put our heads in the sand. We burden thousands of kids with unnecessary debt. And we blow more hot air into a bubble that’s already poised to burst. In other words, we’re still lending money we don’t have to kids who can’t pay it back, to educate them for jobs that no longer exist.

And that Dave – as your kids have wisely surmised…is bullcrap.

4 thoughts on “OFF THE WALL: Regarding For Profit Technical Schools”