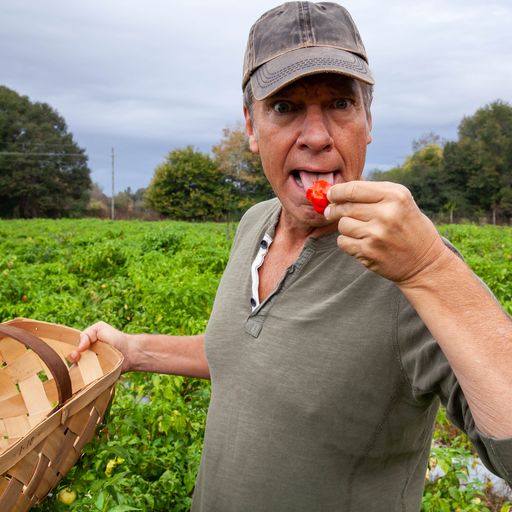 Mike – Absolutely LOVING the new episodes of Dirty Jobs. Love seeing you rolling up your sleeves and still getting in there. Was curious though – you kinda pussed out on the Carolina Reaper thing. How come you didn’t try the hottest pepper ever made? In the old days, you would have eaten one. Still love ya! (Have you seen The Hot Ones? You should go on!)
Pat Lawhon

Hi Pat
To be honest, my intention on that day was to eat whatever Ed put in front of me. I wasn’t looking forward to it, because frankly, I don’t really enjoy super spicy food. I like a little heat with my carbonara, and maybe a little Tabasco on my eggs, but I don’t understand the current obsession with swallowing the hottest peppers on the planet just to say, “I did it!” as sweat, tears, and snot stream down my face. But still, I was game, and I went to Puckerbutt with every intention of chowing down on a ghost pepper, or a Carolina Reaper, or a mouthful of Napalm, or whatever Smokin’ 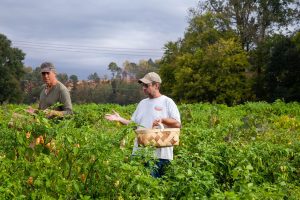 Ed Currie put in front of me. However – and I know this sounds lame – I had a prior engagement that turned out to be completely incompatible with swallowing peppers that ranked 4 million on the Scoville scale. Specifically, I was scheduled to fly to Nashville that night, and record a song with John Rich early the next morning.

When I shared this with Ed’s partners and employees, Ed’s own people warned me NOT to eat the super-hot stuff. I’m not exaggerating. Off camera, they said, “Ed will light you up. Do NOT go toe to toe with Ed Currie. He’s immune to the pain.” One guy pulled me aside and said, “Seriously man, “this sh@t will f@*k you up for DAYS! It will f@*k you up in ways you can’t even understand. Seriously – Do NOT eat the Ghost Pepper!” 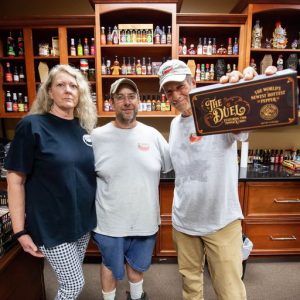 And so, I didn’t. Perhaps it was a pussy move, but I felt like I’d made a promise to John Rich, and if those godforsaken scrotum-shaped gasoline bombs had in fact rendered me speechless, I’d have no one to blame but myself, (and the world would have been denied the feel-good hit of the season, “Gotta Santa’s Gotta Dirty Job.”) So, Zach Hall stepped in, and thank God he did. The Ghost Pepper messed him up for at least 36 hours. He threw up, twice, fell to the ground, and shook like a man with a terrible fever, even though he claimed to be “cold all over.” He later told me he hallucinated off and on for the next two days, and saw aliens following him to the airport.

However…I’m still game. I have in fact, seen the Hot Ones on You Tube, and I told Ed – who knows all of those guys – that I would gladly appear on that program to atone for my reticence. To be clear, I would prefer not to, but Sean Evans is an excellent interviewer, and I’d be happy to chat with him while eating some wings drenched in sauce curated from the surface of the sun. Just for you, Pat, and anyone else who thinks I mailed that one in.

Finally – a word about my host, and the man who started the PuckerButt Pepper Company. Ed Currie was a drug addict, once upon a time, and at the very bottom of a very deep well. He’s still an addict, but today, the object of his addiction is not a controlled substance, but a burning desire to grow the hottest pepper on the planet. In other words, he replaced a deadly addiction with one that’s merely painful. He’s not just a guy w 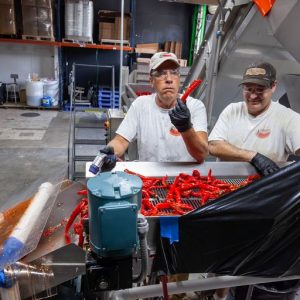 ho loves to eat insanely hot things, he’s a guy who reinvented himself, found a passion, started a business, hired some people who needed a second chance, and gave them a way forward. He’s also very generous with his community, and completely humble about his success. He still would have lit me up like a Roman candle had I let him, but other than that, he’s one of the kindest people you’ll ever meet. And many of the sauces that use his peppers, are not only edible, but delicious.

Have Yourselves a Happy and a Spicy New Year!
PS There’s a new episode Sunday night on Discovery. 8pm. It’s very, very dirty.