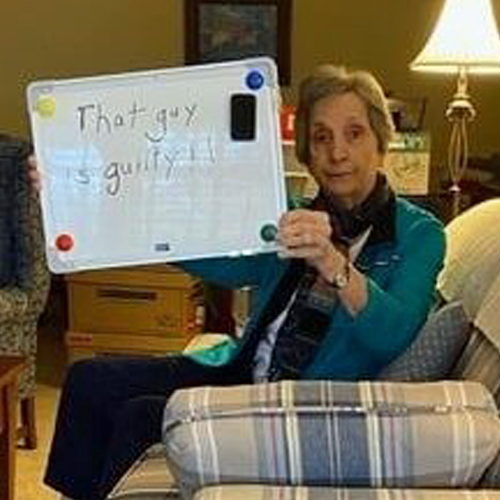 Either way, the first episode of Dirty Jobs is in the can, and during the shoot, I celebrated/grieved another birthday on the road. Many thanks to all of you here who sent kind wishes for another happy return. One note stood out, however, from an elderly woman in Baltimore who seems like a blast at parties. I thought I’d share it here, along with the photos that accompanied it.

Happy birthday, Mike. Wish we could see you today, but understand you’re tied up on a jellyfish boat. We understand. I just wanted to bring you up to speed on our situation, and assure you that your father and I don’t blame you for any of the recent drama. I do feel lucky, though, not to be writing this letter from the police station.

On your last visit, you noticed that the volume of our TV was making the living room windows and lamp shades vibrate. You made a suggestion that changed our lives—literally: TV Ears. The simple Bluetooth wireless headset that allows your father to hear the TV at a reasonable volume, and me…to remove my earplugs.

The downside—conversation between Dad and me is now impossible. He can hear only the television. As you’ll recall, I mentioned this to you a few weeks later, and you surprised us with a dry erase board.

Such a clever idea! I can sit on the sofa, write my comments, and hold up the board. Dad, sitting in his blue lounger ten feet away has only to read it and react. Voila!

Only one problem—getting his attention. I’ve screamed! I’ve waved a towel in the air! I’ve thrown a pillow at him (and hit the lamp…) Nothing. By the time he looks up, the 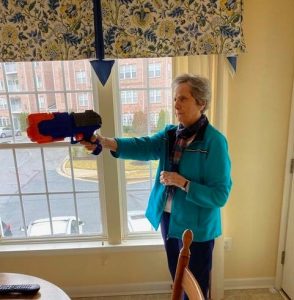 action has moved on.

Well, last week we received a package from Amazon. I still remember your father’s reaction when he opened it. “What the…? Who would be sending us an “Adventure Force Tactical Strike Sentry X2 Ball Blaster?”

“Hey Mom. Here’s the perfect way for you to get Dad’s attention while he’s watching TV. Just load a nerf ball into the gun and shoot him in the leg. Don’t shoot your eye out!”

Before I knew what was happening, your father unwrapped the weapon and began shooting random targets around the living room. First, our family photograph on the wall across the room, then the thermostat, then the toaster on the kitchen counter. He was eyeing the dining room fixture when Midsomer Murders came on.

It was a typ 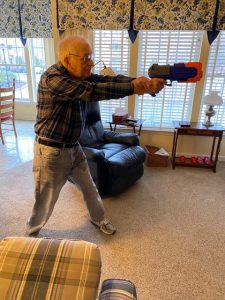 ical evening in the Rowe house with Dad ensconced in his blue recliner, TV Ears in, and me—on the sofa with my coffee, my dry erase board—and my Adventure Force Tactical Strike pistol fully loaded with six rounds of ammo. What could possibly go wrong? Let me tell you.

A few minutes into the show, I wrote my prediction on the board, laid it down, picked up my pistol, and shot your father’s glasses clear off his face. Luckily, they didn’t break. Before I knew what I was doing, I squeezed off another round, this time hitting a much lower target. Let’s just say they don’t call this a “Ball Blaster” for nothing! Your father was not pleased.

Anyway, you’ve always said the most dangerous firearms are possessed by people who don’t know how to use them. So, yesterday morning I stood in the sunroom and took some target practice. Unfortunately, I was in front of the window as a passerby glanced up and saw somebody with a gun in a threatening pose. She called our building captain (instead of the police, thank heavens!) What a mess. Your father’s still enjoying the gun but won’t let me shoot it. That’s fine with me!