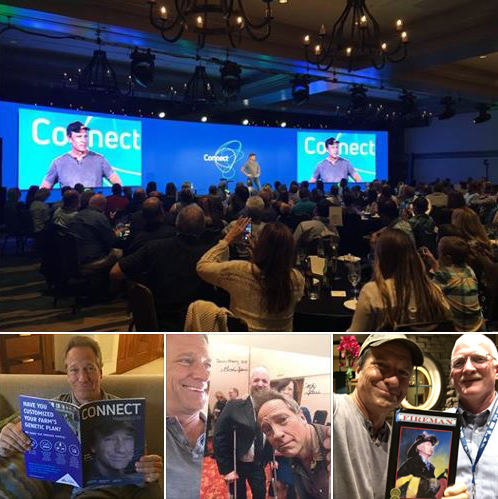 Leaving Colorado, bound for Louisville. Big thanks to all the amazing dairy farmers I met last night, and to VAS for allowing me to address such a terrific crowd.

Among the highlights; two very late nights in the hotel bar with America’s dairymen, seeing my giant face on the cover of their industry magazine, and a delightful encounter with Gordon and Cathy Speirs – two farmers who presented me with a picture of me photobombing them, at an event in Madison three years ago I don’t recall attending, but obviously did. (Only a dairy farmer would save such a photo, enlarge it, autograph it, and then save it just in case our paths might ever cross again. Hysterical.)

Most memorable however, was a quick conversation with a dairy farmer named Brandt Kreuscher. After my speech last night, Brandt approached me, somewhat sheepishly.

“Mike,” he said, “I’m so sorry to do this, but when my Dad heard you were speaking at this conference, he made me promise to give you a copy of his book.”

“His name is George Kreuscher. He was a Fireman for 31 years in New York City. He’s a big fan of what you do and what you stand for. And he really wants you to have his book.”

I accepted the book and took a photo with Brandt, so he could prove to his old man the deed was done. Then I went off to imbibe with more dairymen. Now, I’m sitting on a plane, reading George’s book. It’s called, “Fireman,” and it’s riveting. 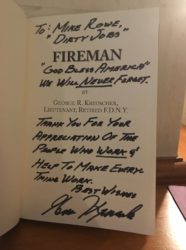 George Kreuscher answered over 28,000 calls during his long and extraordinary career with Rescue 1. If you want to get a sense of what it’s like to be a fireman – not as a profession, but as an identity – George can tell you. The fact that a man of such grit and work ethic would want me to read his book is deeply flattering. And his inscription is nothing short of humbling.

Thanks Brandt, for following orders.

And thanks George, for risking so much for so many, and for taking the time to write it all down. https://amzn.to/2MpYXWP