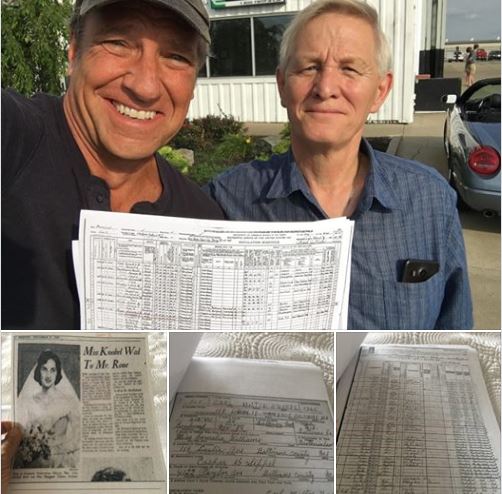 I’d like to take a second to acknowledge the tenacity and generosity of Jessie Hagan.

Jessie is a genealogist at The National Society of the Sons of the Revolution here in Louisville. Earlier this week, after learning I’d be in town for a few days, he offered to trace my family roots back to the American Revolution and present me with the results of his research before I left. I was intrigued, but too busy to reply. I also know how much work it takes to assemble that kind of detail and didn’t want to casually accept such a generous offer. Well, Jessie decided to proceed anyway.

Over the last few days, he complied no less than 50 pages of marriage certificates, birth certificates, and death certificates, along with census records, population schedules, and all sorts of documents from the Department of Commerce. I know this, because Jessie was waiting for me yesterday afternoon at a private airport in Louisville, just as my flight returned from a daytrip to West Virginia, where I’d spent the day shooting a new episode of Returning the Favor. There, he presented me with a veritable compendium of genealogical goodness.

How did he know where I’d be? Because Jessie really is an expert at figuring out where people come from. Yesterday, as some of you no doubt noticed, I posted a short video from Mercer Field in West Virginia. Jessie noted the tail number of my plane, went to a website, and accessed the flight plan. Then he drove to the airport where I’d be returning and presented me with a family tree that goes all the way back to the 1600’s. Extraordinary. And fascinating.

It was by any measure, better than a bouquet.

PS You mentioned you were going to order a copy of my mother’s book. Don’t. I have your business card, and will send one to your address.
mikerowe.com/momsbook
Mike’s Facebook Page