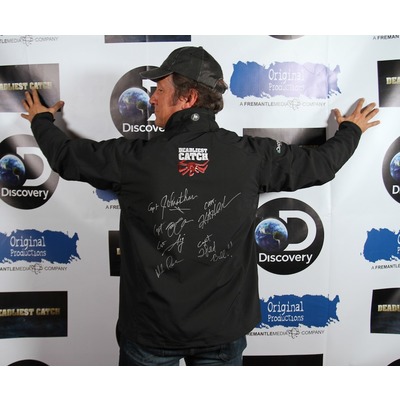 Mike – Last night on Tucker, you talked about the dangers of unintended consequences. I completely agree, especially with respect to things like the minimum wage, rent control, etc. But I’m wondering if you worry about what might happen as a result of your comments regarding those muddy blue jeans at Nordstrom’s for $425. Your post has gone viral, and today, Nordstrom’s is getting creamed in the press. Do you worry that what you’ve said will get someone fired?

That’s a fair question, and the answer is no. Frankly, I’m more concerned that all the attention will lead to a spike in sales, followed by a promotion for those most responsible for this madness, which might in turn lead to an entire line of overpriced, mud-spattered garments for a whole generation of entitled trust-fund babies who just want to play dress-up.

Personally though, I have nothing against overpaying for clothes that are actually worth it. Take for instance, this tasteful jacket from Season 1 of Deadliest Catch, signed by The Captains and yours truly. It’s about to sell for $1,900, unless someone swoops in today and writes an even larger check. Expensive? Damn right. But every penny of this, and all the items currently up for bid, goes to help the families of men who died On The F/V Destination, during last year’s King Crab Season.

To all the fashionistas out there – if the money is really burning a hole in your pocket, throw a little this way. It’s a jacket that served me well, and as a bonus, it’s freshly laundered, and signed by men who understand the difference between real and fake dirt.

So by all means, bid high and irresponsibly, and keep it clean…