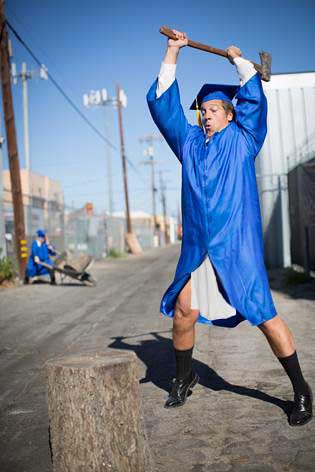 Albert Samos writes…The media has recently been stating that Donald Trump’s key supporters didn’t graduate from college. They constantly refer to these people as “uneducated white men.” As an electrical contractor who happens to be a white guy with six employees but no college, I find this vaguely offensive and somewhat confusing. What do you think of the media characterizing people this way?

If the media is referring to Trump supporters who happen to be male caucasians suffering from a lack of knowledge brought about by an absence of formal or practical instruction, than I guess “uneducated white men” is a fair description. However, if the Trump supporters in question are being dubbed “uneducated,” simply because they didn’t earn a four-year degree, I’d say the media’s slip is showing.

Let’s assume that Donald Trump is indeed popular among white men who didn’t graduate from college. The first question is, so what? Is this information newsworthy? Obviously, thousands of journalists think it is. To your point, the words “uneducated white men” now appear in hundreds of articles about Trump. But if this is truly important information, where were these reporters four years ago? In the last election, an even greater majority of African-American males who voted for President Obama had no college on their resume. Maybe I missed it, but I don’t recall any headlines or articles that delved into Obama’s popularity among “uneducated black men.”

There are many ways to become educated that don’t involve the purchase of a diploma. Why would the media ignore thousands of apprenticeship programs, on-the-job-training opportunities, and all the other alternative educational options that have led so many people into so many successful careers? The answer is obvious – many in the press are looking for ways to impact the election. If a biased reporter can get away with labeling Trump supporters who didn’t graduate from college as “uneducated,” he can simultaneously imply that any ballot cast for Trump is the hallmark of an “uneducated” voter.

If you’re only “vaguely offended” by this Albert, maybe it’s because you’ve seen it all before. Never mind the fact that you run a successful business. Never mind your years of training, your skill, your knowledge, your diligence, your commonsense, and every other quality that allowed you to succeed. In this political climate, none of that matters. These days, you’re just another white guy who never made it to college, voting for the “wrong candidate.”

It’s impossible for me to have this conversation and not think of my grandfather. Pop never made it to college. In fact, he never made it out of the 7th grade. But he never stopped learning or studying. He started as an electrician’s helper, became an apprentice, a journeyman, a master electrician, a contractor, and then a small business owner. Later, as an electrical inspector for the state, he was responsible for guaranteeing the safety of hundreds of buildings in Maryland, as well as all the rides on the carnival midway at the State Fair. He was a modest man of real intelligence, admired and respected by everyone who knew him. But today, he’d be right there with you, Albert – swelling out the ranks of “uneducated white men.”

Forget the election for a moment, and the medias role in it. The issue of what it means to be “educated” in 2016 has far greater implications. Right now, 5.8 million jobs currently exist that employers can’t seem to fill. Meanwhile, outstanding student loans will eclipse 1.3 trillion dollars this year, college tuition continues to rise, and once again, a new crop of deeply indebted college graduates will enter the workforce with none of the necessary skills to fill those open positions.

Closing the skills gap and making college more affordable is beyond my pay grade, but it seems like we could start by reminding the media that a college degree is not the only path to success. It’s well and good to promote higher education, but it’s crazy to suggest the most expensive road to enlightenment is the best path for the most people. And it’s equally nuts to pressure our kids to keep borrowing vast sums of money to become “educated” in careers that no longer exist.

On Dirty Jobs, I met hundreds of highly trained, highly intelligent, highly knowledgeable citizens who went on to prosper without the benefit of a university experience. These people should be congratulated, not used a pawns by reporters with a political agenda. I don’t care who you’re voting for – your college diploma – or your lack thereof – has nothing to do with the wisdom of your choice.

Anyway Albert, that’s a long way of saying you have every reason to be “vaguely offended and somewhat confused.” The media has minimized your work, insulted your intelligence, and ignored your contribution to civilized life. Try not to take it personally. Just keep doing what you do. Run your business. Vote your conscience. Keep the lights on for the rest of us. And the next time some hack writer impersonating a journalist attacks a candidate by calling their supporters “uneducated” – simply because their base of knowledge isn’t memorialized on a sheepskin – send them this picture and tell ‘em their slip is showing. And that one lousy hatchet job deserves another…

PS. mikeroweWORKS has a new Freddy and The Biped Campaign Tee-Shirt with a non-partisan message guaranteed to help close the skills gap – “A Doghouse Divided Against Itself Cannot Stand.” Not only are they the epitome of fashion, a portion of the proceeds pay for training programs for jobs that don’t require a four-year degree.