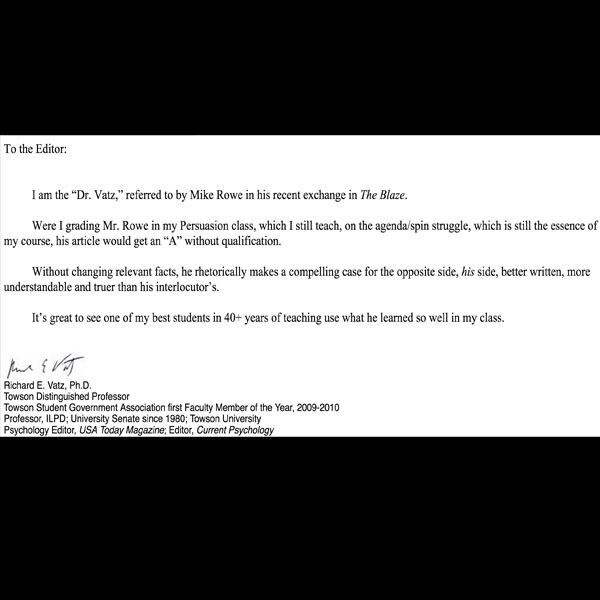 I’d like to take a moment and thank the editor at The Raw Story for revising their recent headline. Or at least, for changing it from wrong and outrageous, to simply wrong.

For those playing along at home, The Raw Story wrote a headline over the weekend that accused me of “trashing” the character of a young woman named Shania Clifford, and identifying me as a guy who “helps run” the skills competition that bungled her score. That headline, combined with an image of me that calls to mind the unholy coupling of a child predator with a Sharpei, quickly lead several thousand Raw Story Loyalists to demand my wrinkled head on a platter.

Yesterday, I spent a few hours in their Comment Section, trying to salvage my good name by presenting a few of the actual facts to the aggrieved. Alas, I fear the facts – and I – were both unpersuasive. Today, Sharpei/Predator/Mike is still over there, along with a new headline that reads, “TV’s Mike Rowe questions teen’s decision to keep medal after contest controversy.”

While “questioning her decision” is a lot better than “trashing her character,” the headline is still rubbish. The truth is, I never questioned Shania’s decision to keep the gold medal – what I questioned, was the organization’s decision to give her the option of keeping it.

Unfortunately, there’s nothing all that interesting about a B-list celebrity questioning the policies of a big organization in the wake of clerical error. So The Raw Story conjured up a much more exciting tale about “The Dirty Jobs Guy” coming out of nowhere to bully a little girl who was discriminated against by a bunch of sexist men. Now that’s a story! A work of fiction to be sure, but a story nevertheless.

Look, the facts are important here – not for my sake, for Shania’s. She’s been put in a very awkward position by a bunch of adults who should know better. First of all, the adults on the ground blew it. Somebody transcribed the score incorrectly. That was sloppy. Then, some other adult notified the boy with the higher score before notifying Shania. That was even sloppier. Then, a decision was made to allow Shania to keep the award, even though she was bumped from the competition. That was the biggest mistake of all, in my opinion. Because that decision lead Shania to ask a perfectly sensible question – “If I can keep the medal, why can’t I keep my place in the competition?”

That question lead the adults at The Columbus Dispatch to write an article that never would have seen the light of day had Shania been a boy, and suddenly, the underlying sloppiness that created the problem was replaced with a boatload of implied sexism. That opened the door to all kinds of conjecture and conspiracy theories. A petition was drawn up by a concerned adult, and quickly signed by hundreds of other concerned adults with no understanding of the actual facts, but a deep yearning to get “justice for Shania.” Enter the adults at The Raw Story, who wrote an even more inflammatory version of the The Dispatch article, which fanned the flames of the supposed conspiracy even harder.

As the petition grew, I was asked by hundreds of people to comment on the “controversy.” Since I was speaking at SkillsUSA that same week, I did. I criticized the adults who created the problem, I lamented our societies obsession with “participation trophies,” and I encouraged Shania to take control of the situation by returning her gold medal. To her own point – if her score was insufficient to qualify for the finals, why is it sufficient to warrant a gold medal?

Obviously, it doesn’t, and for that reason, the organizers of the event should have asked her to return it. But they didn’t. They gave her the option of keeping a medal that was clearly awarded by mistake. That sucks. Add that to the pressure of a petition signed by lots of people who think she’s been victimized by something far more serious than a clerical error – people who now want her to “take down” an entire organization – and you have a young girl under a lot of pressure. I suggested a course of action that I believe would make the best of a bad situation. I did not suggest that keeping the trophy was some sort of character flaw. I suggested that giving it back would distinguish her in a way that keeping it would not.

That’s when The Raw Story swooped back in with their fantastic interpretation of events, casting me in the role of Snidely Whiplash, and poor Shania as Penelope Pitstop – strapped to the railroad tracks and waiting to be saved by Dudley DoRight – otherwise known as, “Everyone Who Agrees With The Raw Truth.”
And here were are.

In other news, this years competition in Louisville has come to a close. The competitors did a remarkable job, and deserve our congratulations. This year, mikeroweWORKS sent 89 students from across the country, and they all performed with excellence. I’m proud of them all, and look forward to next years event.
Mike

PS. The best part of all this, for me, is an unexpected email from Dr. Vatz, a professor of rhetoric and persuasion from my old alma mater. After invoking his name in my earlier screed, he was kind enough to send this to me. It’s not quite as satisfying of getting an “A” in his class….
but it’s pretty close.