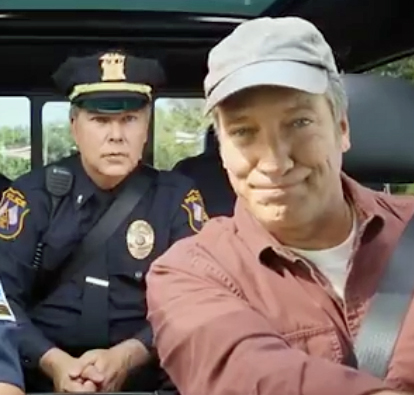 Hey Mike – I saw a commercial the other night on Kimmel. You were driving a truck and talking about brakes. There were three cops in the back seat. Do my eyes deceive me, or was that Chuck Klausmeyer in the middle telling you to slow down? And why weren’t your hands at 10 and 2!!

Hi Nancy. You’re very observant. Chuck, as many on this page know, is an old high-school buddy who helps out with mikeroweWORKS. He’s also one of those freelance actors who pops up all over the place, upstaging me whenever possible. Aside from his many appearances in plays, films, and sitcoms, Chuck has appeared in my various projects as an elf, a dog, a janitor, a pizza delivery guy, and many other characters he no doubt developed during his time at the prestigious American Academy of Dramatic Arts, back in the early part of the last century.

In this particular commercial, Chuck plays the ultimate backseat driver, keeping me honest as I attempt to discuss with Jonathon – an actual technician – the many advantages of brakes that will stop your truck up to 50 feet sooner. The spot speaks for itself, and will no doubt result in the sale of millions of Wagner OEx brake pads, while sending Chuck’s career to a whole new level.

As for my less than convincing performance behind the wheel, I am indeed guilty as charged. But I have an excuse. I thought the spot was going to end with a wide shot of the trailer that was towing our vehicle. (Most scenes shot in the interior of a moving vehicle are shot on a trailer so the driver doesn’t have to drive and “act” at the same time.) Doing so would have reinforced the larger safety message, and explained my decidedly distracted demeanor, thereby sparing me from your gentle admonishments. Unfortunately, that shot didn’t make the final cut.

But here’s what it would have looked like, if time permitted…