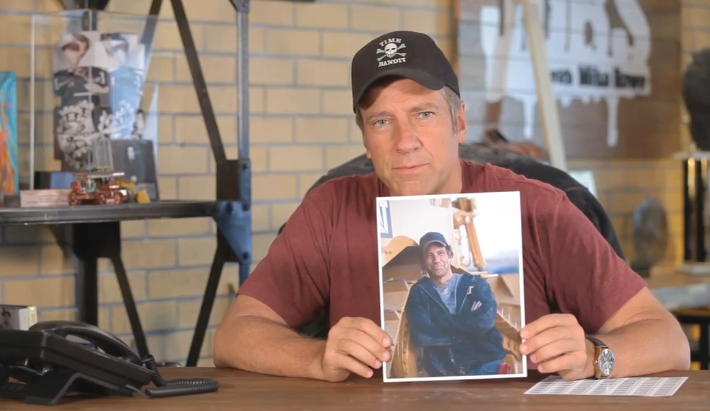 Several years ago I threw a temper tantrum while filming in Las Vegas.

As with most temper tantrums, there was no excuse for this one, but if I were to make one, I might blame the previous two weeks on the road. I’d been shooting Dirty Jobs pretty much round-the-clock, and suspect I was clinically exhausted. My hope was to snooze on the plane, but alas, Southwest decided to board my flight way ahead of schedule, which left me in a middle seat between two very nice people from Utah who were not only fans of the show, but very curious about the ins and outs of reality television. Thus, I arrived at McCarran in the middle of summer – unrested, unfed, and thoroughly interviewed.

My job that day was foundation related. I was there to participate in a series of videos highlighting the many opportunities that exist for skilled technicians. Earlier that year, I had met the owner of the local Cat Dealer and saw firsthand the difficulty of recruiting skilled workers, even at a time of record high unemployment. I was there to help call attention to some of those opportunities, and shine a light on several thousand jobs at Cat dealerships around the country.

The shoot was a success, but hard fought. We were outside for much of it, and the desert sun was sucking out my usual joie de vivre. Along with the film crew, there was a photographer on hand – a cheerful fella named Kevin who Cat had hired to document the day in pictures. Toward that end, Kevin took approximately 5 million photos. I’m not even kidding. He had one of those automatic cameras that sounds like a machine gun when you hold the button down, and believe me when I tell you, Kevin knew how to hold that button down. clickclickclickclick! Additionally, Kevin approached his job with a level of enthusiasm hard to describe, and a strong belief that anyone being photographed should be smiling at all times. I know this because every five seconds, Kevin would look my way and exclaim, “BIG SMILES MIKE! THAT’S IT…BIG SMILES!!!”

By noon, I was dehydrated, but too busy to recognize the symptoms. By two, my head was throbbing in a way that made my vision jump. By three, I was hallucinating. By four, I was fixated on the the very cold gin and tonic that awaited me back at the hotel. By five, Kevin’s machine-gun camera was still firing away, and my face was a frozen rictus. I knew with certainty I’d and be hearing his voice in my dreams – “BIG SMILES MIKE, COME ON NOW…BIG SMILES!!!”

At seven, my work was done. I said my goodbyes, thanked everyone at Cat, and staggered toward the car and driver that would take me to a soft bed and a mini-bar. At the last moment though, I was intercepted by my business partner, who thought the setting sun and desert landscape provided a perfect backdrop for some additional photos. I looked at her, incredulous.

“Good God, Mary. We already have enough photos to fill every album ever made. What’s the point?”

“Well,” she said, “it might be nice to have a few in this very handsome Caterpillar sweatshirt.” Mary handed me a brand new, heavy-duty hoodie that appeared to have come right out of the box. It was neatly folded, and still had that “new sweatshirt” smell.

Mary knew that the The Dirty Jobs Guy would never pose for a photo in a brand new sweatshirt. It’s a rule. But she was right – I should to pose with something that had a CAT logo on it, especially since all the Cat people were watching me. But just as I was putting the damn thing on and mentally advising my liver that the G&T would have to wait, Kevin piped in with the same level of unquenchable enthusiasm he possessed at the start of the day.

Something snapped, and the aforementioned tantrum began to unfold. According to witnesses, I yanked off my nice new sweatshirt, threw it into the dirt, and began to stomp on it with extreme vigor. I yelled some unintelligible things, shook my fist at the heavens, and did my best impersonation of Ralphie’s dad in A Christmas Story – specifically, that scene when he comes unglued while trying to fix the furnace.

Afterwards, I explained to those around me that I was simply “distressing” the sweatshirt into a state that would allow me to wear it in a way that was congruent with my public persona. But really, I was channeling eight hours of pent-up self-pity into a perfectly innocent hoodie, and scaring the hell out of everyone nearby, including Kevin, who was no longer taking photos, or imploring me to “SMILE BIG!”

Today, I’m pleased to pull this five-year old, prematurely distressed garment from my bottomless laundry bag, and offer it to the highest bidder. As always, proceeds go to Work Ethic Scholarships. So – breathe deep, count to 10, and bid here. And if you’d care to watch the rest of the video, go here.

Either way, don’t freak out. It never helps.

PS For what it’s worth, (and it’s worth more than you think,) Cat is still looking for people willing to learn a skill that’s in demand. They’ll even train you, if you’re not afraid to get your hand dirty.